Is Tom Reese right about what ails the Church?
By Paul Baumann
U.S. Catholicism
Theology
Liturgy 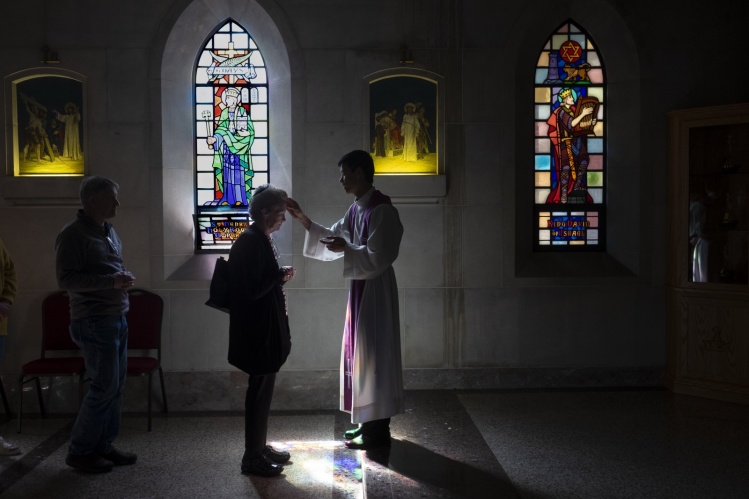 The liturgy should provide what the secular world cannot give (CNS photo/Rick Musacchio, Tennessee Register).

Tom Reese, SJ, the former editor of America, writes a column for Religion News Service that regularly appears in the National Catholic Reporter. He recently tackled the vexing, if well-worn, question of “Why Is the Church Failing in the West?” He made some shrewd observations but came to dubious conclusions.

Reese is a distinguished social scientist who has examined the institutional workings of the Church in his books Archbishop: Inside the Power Structure of the American Catholic Church and Inside the Vatican: The Politics and Organization of the Catholic Church. In his column, Reese rehearses the explanations offered by both conservatives and liberals for the Church’s current troubles. “The theories can be collected in two major baskets” he writes, “those that blame culture and those that blame the Church itself.” That dichotomy is familiar enough. Conservatives, especially those in the hierarchy, blame secularization, individualism, and consumerism. The urban, tribal, and cohesive Catholic communities of the last century have decamped to the deracinated suburbs. Nor are priests the most highly educated folks in the community anymore. Affluence and intermarriage undermine the old loyalties. Vatican II destroyed the notion of the Church as an unchanging “perfect society,” and opened the door to Catholic theologians taking public opposition to Church teaching. Or so conservatives often complain.

Liberals, on the other hand, blame the Church’s problems on a calcified hierarchy. Fr. Andrew Greeley, another social scientist, thought the hierarchy lost the laity with Humanae vitae, Reese reminds us. Liberals think not allowing priests to marry and not softening the Church’s teachings on abortion and gay rights has alienated most Catholics, especially the young. Reese candidly admits that he tends to side with the liberal rather than the conservative critique. He concedes that there is a lot of truth in the conservative argument, “but blaming the culture is like blaming the weather. That is the world we live in: learn to deal with it.”

Reese then makes several curious arguments. He thinks that both theories about what has gone wrong have been created by “theologians who believe that ideas are what motivate humans.” As a social scientist, he begs to differ. “Experience often matters more,” he writes. But these dueling conservative and liberal interpretations of the Church’s decline are hardly confined to theologians; they have been taken up with a vengeance by a good many lay people. Nor do all, or perhaps even most, theologians think ideas alone are what motivate people. Bad experiences in church, at funerals or during confession, can of course push Catholics away, as Reese observes. But is it true that “more people are driven away from church by arrogant priests than by disagreements over theology”? I’ve attended many churches over the years, and I have rarely been confronted by arrogance from the pulpit. But I have also rarely encountered inspiration or exegetical excellence. Clerical mediocrity, not arrogance, is the more common problem.

The Church still hopes to transform the world, not merely deal with it.
sharetweet

Reese is probably right to say that more people flee the Church “through boredom than because of theology.” But in my opinion, he misjudges the source of that boredom. “If the preaching is dull, if the music does not move them, if they do not feel welcomed, then they are not going to come back,” he writes. “If the Mass is seen as something that the priest does, if the Scriptures are the domain of the clergy, if there is no sense of community, then why come?.... Catholicism must also be a lived experience that is relevant to the lives of the faithful.”

Again, it is not my impression that Catholics are now oppressed by priests who lord it over them or take sole possession of the Scriptures. Lay lectors and other ministries proliferate. Strenuous efforts by greeters try to create a sense of community. Still, the “lived experience” of the liturgy often does fall short. How might this be remedied? In the future, Reese writes, “don’t invite the theologians” to any discussion of how to fix things. Instead, “invite sociologists, psychologists, artists, musicians and the people who have left the Church.”

That analysis puts the cart before the horse. Theologians are not the sole solution to the Church’s problems, but it is a mistake to think that setting aside theology or doctrine is the answer. In too many churches “theology” already takes a back seat to largely futile efforts at “community” building. Yet if what the Church makes palpable and accessible about God in the liturgy is of secondary importance, it is hard to imagine why the Church exists in the first place. As the liturgist Aidan Kavanagh OSB wrote many years ago, “Why should people go to such a liturgy in order to be affirmed in values that are at least as well celebrated elsewhere?”

By all means, let’s improve the preaching and especially the music. But I suspect that the advice of sociologists, psychologists, and especially those who have left the Church will do little more than mirror the current therapeutic, materialistic, and this-worldly preoccupations of secular culture. Such a move would not only accept the reality of what Reese calls the cultural “weather”; it would open the Church’s doors and let a hurricane of nontheological distractions blow through. The Church still hopes to transform the world, not merely deal with it.

If you don’t want people to be bored, give them something they can’t find outside of Church. That something is what Karl Barth called the “strange new world within the Bible.” Try the Incarnation, the Resurrection, and the seeming impossibility of the Afterlife. As Kavanagh wrote, the “fundamental sacramental reality at the core of the rite” does not produce “direct causal results on complex and long-term social problems.” Rather, the liturgy’s task is to cultivate “a spirit of adoration in leading a life toward God,” one that puts the “assembly in a condition to stand before God in a radical act of obedience to him for the life of the world.” The expertise of psychologists and sociologists is largely irrelevant to that task. Yes, the Church should be a welcoming community, but it must be a community that emphatically looks beyond the things of this world in order to properly value them. The Church’s primary concern should not be to relieve my boredom, and I don’t need it to confirm my worldly obsessions. I need it to challenge them.