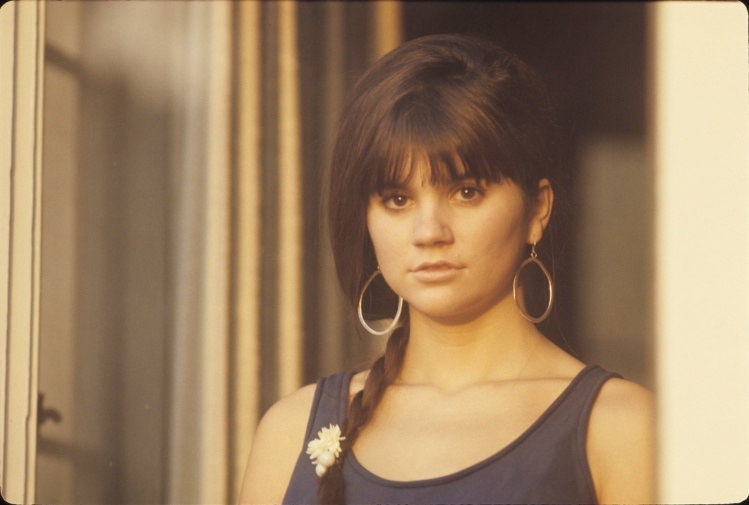 Linda Ronstadt: The Sound of My Voice documents the career of a singer who burst onto the popular music scene at an early age and remained a dominant figure for decades. Now in her mid-seventies, Ronstadt has Parkinson’s disease; she narrates this engaging retrospective, and while her speaking voice sounds upbeat and steady, she can no longer confidently sing, and ceased performing in 2009. The documentary combines footage of her performances over the years with interviews of fellow musicians, including Jackson Browne, Emmylou Harris, Dolly Parton, Bonnie Raitt, Ry Cooder, and Don Henley (who with Glenn Frey played in Ronstadt’s backup band before forming the Eagles).

There are big gaps in the story; we learn little about Ronstadt’s romantic life, for instance, beyond her already well-chronicled relationship with Jerry Brown. What filmmakers Rob Epstein and Jeffrey Friedman have created, as their title suggests, is the biography of a voice, and of a musical sensibility and drive, rooted in family background, that propelled a singularly energetic and varied career. The film begins with Ronstadt’s childhood outside Tucson, in a close-knit family of German origin that had lived for a couple of generations in Mexico. It was a music-loving family, and the isolation of life in rural Arizona was relieved by listening to (and singing) all sorts of music, from opera to Mexican ballads to Broadway standards.

In 1964, at the age of eighteen, Ronstadt moved to Los Angeles, where she joined the exploding folk-rock scene (the movie makes an excellent companion piece to Echo in the Canyon, featuring many of the same places and faces). With Bobby Kimmel and Kenny Edwards she formed the Stone Poneys, quickly becoming known for her mini-skirted, barefooted performances at The Troubadour and other clubs. In 1967 the group did a cover of the Mike Nesmith song “Different Drum,” turning it into a hit on their second album. The Poneys originally performed it to a slow-paced, minimal accompaniment that Ronstadt far preferred to the highly orchestrated, up-tempo version the record company released (she was wrong, as she admits fifty years later, with a laugh), and the difference in the two versions nicely glosses the era’s transition from folk to rock, the song’s mellow folky mournfulness (which echoed the original 1965 rendition by the Greenbriar Boys) transmogrified into pop exuberance.

After “Different Drum,” music execs clamored for Ronstadt. Leaving the group to go out on her own, she proceeded to become the first female mega pop star, racking up five platinum records and no fewer than ten Grammys, and was the first singer ever to be No. 1 on country, pop, and R&B lists simultaneously. Though hugely successful, Ronstadt spurned the personal craziness and decadence of the rock-star lifestyle; making music always remained the whole of it. Her brashness as a performer notwithstanding, she was in fact modest, and prone to persistent doubts about her ability as a singer. (Her manager, Peter Asher, recalls that if Ronstadt saw two people in the front row of a concert whispering to one another, she worried they were saying she wasn’t good enough.) Yet once she started singing, those doubts disappeared, vaporized by her voice with its vaulting range, its flexible but always recognizable timbre, its intermittent adornments of vibrato, and its ability to imbue a pop lyric with fierce longing. She was the kind of powerful singer who filled the air and commanded the room.

A rewarding turn in Ronstadt’s career, and in the movie, comes at the peak of her fame, when she decided to drastically change her tune and explore interests outside the range of pop music—unexpected efforts that followed the lines of her parents’ musical passions. She made three albums of songbook standards with Nelson Riddle, the famed bandleader she grew up listening to. She appeared in Gilbert and Sullivan’s The Pirates of Penzance in New York’s Shakespeare Festival. And in 1987 she released Canciones de mi Padre, a collection of traditional Mexican songs of her childhood, which became the all-time top-selling Spanish-language album in the United States. As Ry Cooder comments, these quixotic undertakings were brave moves for a pop singer to make. “Her career from then on,” Cooder observes, “was music companies telling her she couldn’t do it, then her doing it anyway, and the music companies jumping on board just as it took off.” You have to love Ronstadt’s sheer enthusiasm for music. As the singer herself says, many of her choices “didn’t fit anywhere but my heart.” We even see her singing with the Muppets on Sesame Street.

Almost in passing, the film captures a quiet feminism, reminding us that Ronstadt rose to prominence in a male-dominated profession in which casual misogyny and the crass exploitation of women were rampant. Her collaborations with Dolly Parton and Emmylou Harris reverberate with shared pride and pleasure in their accomplishment: strong voices, strong women. And comments Ronstadt offered as a young singer—interviewed on the beach in front of her Malibu home by an even younger Cameron Crowe—include penetrating insights into both the strutting misogyny and the heedless self-destruction of the male rock-star persona. In a later scene, asked on a TV talk show about her willingness to perform in apartheid South Africa, she bristles, then launches into a notably astute analysis of the moral shortcomings of other nations, including the United States.

The Ronstadt who emerges from The Sound of My Voice is not merely a supreme pop diva, but a fearless experimenter and a passionate lover of music. Though she eventually ran into health trouble (a closing and poignant scene shows a faltering attempt to sing in her living room with a musician nephew), she emerges as one of the least troubled pop stars ever, and confronts her setbacks with settled serenity. The film is worth watching merely for its parade of hits—“You’re No Good,” “When Will I Be Loved,” “Blue Bayou,” “Love is a Rose,” “It’s So Easy,” “Heat Wave,” “Desperado,” “Poor Poor Pitiful Me”—many of which originated with other groups, and several of which I had forgotten. But for me the high point of the film is seeing Ronstadt sing one of her Mexican ballads, performing with a full orchestra, in a wildly kitschy mariachi outfit. As she belts the song out with fierce, delighted passion, nimbly mastering the complicated Spanish lyrics, you realize you are in the presence not only of a supremely gifted singer, but an irrepressible human being.

These two films about supremely gifted singers explore how fate deals out both the plot of one’s life and the temperament with which we negotiate it.
sharetweet

Near the beginning of Judy, famed studio head Louis B. Mayer lays down to a young Judy Garland the iron laws of becoming a film star, coldly detailing the rigors and sacrifices she will have to submit to. Does she imagine she wants to be normal, he asks sarcastically, like millions of other Midwestern girls? “You aren’t like them,” Mayer says, “because you were born with a voice.”

And so it is a kind of tease that for the first forty minutes of this film, there is no singing at all; when Garland (Renée Zellweger) finally launches into the thirties jazz standard “By Myself,” it comes as an interesting kind of relief. Zellweger does her own singing, and performs creditably. Most of the time she doesn’t sound much like Garland at all—more nasal, less powerful, and lacking both the wistful tremolo and that special, inner amplification, almost like a sound half swallowed into the chest, that lent Garland’s voice its powerful quality of fantasy. Still, at least twice—in a soft and sadly playful rendition of “Get Happy” at the piano with a gay man she has befriended, and in the closing performance of “Over the Rainbow”—Zellweger finds a chord of likeness, catching a hint of the special throb Garland lent to the songs she sang, and of a voice that James Mason, her co-star in A Star Is Born, once said could “wring tears out of hearts of rock.”

Based on a play and directed by British theater director Rupert Goold, Judy focuses on a tumultuous five-week singing engagement Garland undertook at London’s Talk of the Town nightclub in early 1969, in a desperate attempt to revive her career and dig herself out of chronic debt. Goold adds flashbacks to Garland’s experiences as a child star, which seem to have consisted mostly in being bullied by Mayer (he once referred to her as “my little hunchback”), fielding relentless pressure about her looks and weight, and being force-fed diet pills and barbiturates by a Nurse Ratchet–like minder. Garland’s adult life was a dreary tapestry of substance abuse, alcoholism, multiple marriages, suicide attempts, repeated stays in treatment facilities, and drunken appearances onstage before heckling audiences. She became an avatar of the dangers of child fame, and Judy seems determined that we grasp the cause-and-effect of damage. This is the kind of film where a scene with a child being treated harshly segues to the adult, decades later, popping pills. Get it?

However obvious, the film is nonetheless moving, and Zellweger’s performance conveys the toll of punishingly sleepless nights; we see the herky-jerky tics of a person harrowed and even addled by life traumas and the drugs and alcohol taken to medicate against them. Though the arc of Judy moves toward pity and sentimentality (in one scene, when Garland is unable to continue a song, the audience joins in to help), it nonetheless delivers an authentic ache of psychic pain, and includes some touching moments, especially when Garland spends an impromptu evening with two fans, a gay male couple who worship her. The couple has faced legal persecution for obscenity, and the scene gently depicts the way they and Judy find consolation in each other’s company (even as it documents the appeal Garland has held for gay men).

Garland died just a few months after her London engagement ended. She was only forty-seven. In a eulogy at her funeral, Wizard of Oz co-star Ray Bolger observed that “she just plain wore out.” One can’t help noting the contrast with Linda Ronstadt, a person who, no matter what befalls her, seems as if she’ll never wear out. Taken together, these two films about supremely gifted singers explore how fate deals out both the plot of one’s life and the temperament with which we negotiate it. They also testify to the incalculable value of a happy childhood. Possessing one, Ronstadt in midlife ventured forth exuberantly to recapture the music of her youth, attaining a wholeness that confers serenity amid the travails of illness. Lacking one, Garland suffered endless calamity even amid success, sabotaging the promise of her youth in a desperate attempt to escape it.