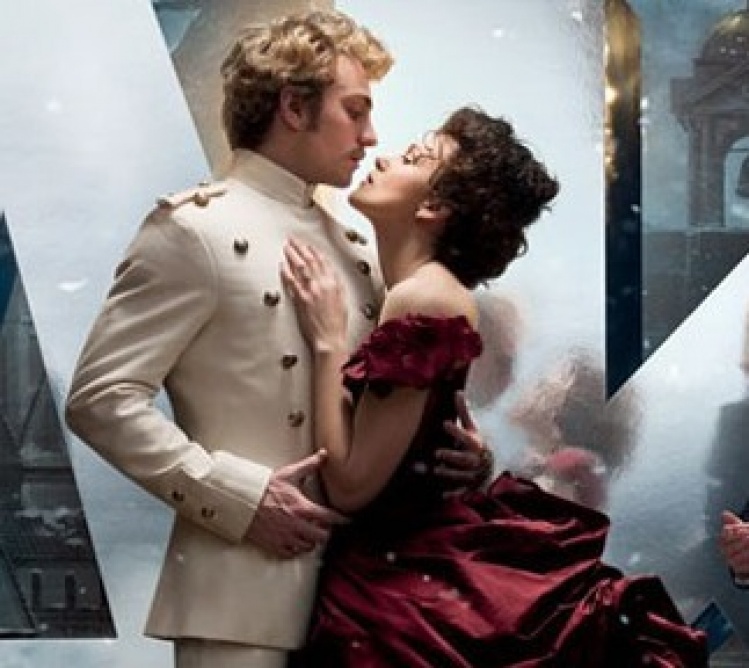 Leo Tolstoy hated theater, or at least the more stylized varieties of it. The author of some well-received plays as well as his much more famous novels, the Count despised Shakespeare, ballet, opera, and any art that couldn’t be appreciated by a sensible peasant.

So it’s piquant that the latest cinematic adaptation of Anna Karenina is at its best when it is most stylized. Director Joe Wright has set the action on the stage of what looks like an elegant theater in nineteenth-century Moscow or St. Petersburg, and he employs this device not as a gimmick but in order to make some very Tolstoyan points. For it is mostly members of the upper class who are on stage. All show and no substance, they carry out their frivolous, soul-destroying amusements while the lower classes function as stagehands and extras, bustling about backstage, stacking scenery, working the lights, placing the props. They labor while the aristocrats and high-level bureaucrats are merely emoting or conducting formalities, and one sometimes feels that the backstage crew could pull the scenery down on the heads of the leading performers. Which, in a way, is just what happened in Russian history.

Significantly, the theatrical setting is jettisoned when Levin, hero of the subplot and the character with whom Tolstoy most identified, goes back to his country estate and works the fields with his farmhands. Labor, sweaty and necessary, brings meaning to Levin’s life and banishes urban fakery, so Wright photographs it in open air and under a real sun.

The cinematic tricks facilitate two big set pieces: the ball at which the spark of adultery is struck, and the horse race where Anna’s passion reveals itself to her husband and to high society. During the ball Wright digitally freezes the movements of some of the dancers while keeping others in motion around the waltzing Anna and Count Vronsky. This effect pinpoints and exalts the beginning of the heroine’s romantic obsession. If Wright had frozen all the dancers, the effect would have been too marionette-like, even ridiculous, but without any stylization the note of erotic isolation would have been muffled.

The novel’s derby scene, brilliant though it is, presents a problem for any filmmaker: Wouldn’t Anna’s consternation at her lover’s accident on the track go unnoticed by the excited crowd? Wright solves this problem by resetting the outdoor race inside an auditorium, with the crowd’s usual noisiness suddenly hushed as rider and mount fall and Anna screams. The auditorium’s walls reverberate her outcry, rivetting the crowd’s scandalized attention.

Tom Stoppard’s screenplay (completed before he knew that Wright intended to use a theatrical framework) does a good job of encompassing the long narrative within a 140-minute running time. Stoppard tries to do justice both to the main action of Anna’s adultery and to the important subplot involving Levin. Shorn of the usual Stoppardian fireworks, the dialogue often captures Tolstoy’s wryness, as when the fatuous Oblonsky (neatly skewered by actor Matthew Macfadyen) tries to calm Levin’s fears about losing his beloved Kitty to the more dashing Vronsky: “Oh, you needn’t worry about him. He’s just a good-looking cavalry officer who likes making love to beautiful women.”

Cast against type as the cuckolded gray bureaucrat Karenin, Jude Law manages to capture both the anguish and the pettiness of his character. As Vronsky, Aaron Taylor-Johnson has been smartly uniformed and pomaded (even his golden eyebrows look well coiffed), but he doesn’t provide the dash and imperiousness that are supposed to captivate the heroine.

Keira Knightley’s peformance as Anna is a partial success. When she turns to Kitty (played by Alicia Vikander) and burbles, “Oh, to be your age again,” it’s unintentionally funny, since neither actress looks older than a prom queen. Though at the outset of the novel Anna is only in her twenties, she’s already a dignified society matron, and it’s this apparent maturity that makes her descent into emotional chaos all the more alarming. Knightley’s youth and volatility may be a liability in the early scenes, but as Anna’s infatuation increases, Knightley’s performance comes into its own. Her Anna is like a dancing flame about to be snuffed out. Knightly is far better than Vivien Leigh in the 1948 film, but if you want to experience Anna’s full tragic arc, you have to see Greta Garbo in the otherwise mediocre 1935 production. Knightley presents, often brilliantly, a magnetic girl undergoing a crisis we hope she’ll outgrow. Garbo gives us a woman whose self-destruction is irremediable.

Despite Knightley’s magnetism, Seamus McGarvey’s sumptuous cinematography (light glancing off the shoulders of ladies at a ball has never been so lustrous), Stoppard’s intelligence, and Wright’s cleverness, this Anna Karenina failed to move me in its final twenty minutes. Why? Unless we are taken inside the characters and see their internal landscapes transformed by circumstances and their own choices, the story becomes no more than that of an adultery that ends badly. Tolstoy’s translucent prose (likened by Dwight Macdonald to that of a recording angel) invites us into several souls. This film version gives us only resplendent surfaces.

So was I moved by another nineteenth-century literary classic turned into flashy, theatricalized entertainment—Les Misérables? Well, my tear ducts were undammed, my lower lip was quivering, and I’m sure an x-ray would have revealed that my viscera had turned upside down. Is that the same thing as “being moved”? If so, then being moved is a pretty disgusting chore. But how can I deny that I, or at least my body, responded just the way composer Claude-Michel Schönberg, lyricist Herbert Kretzmer, and director Tom Hooper wanted?

Victor Hugo’s narrative never fails, even in made-for-TV adaptations. Its plotting is fiendishly effective, and its characters have been mythic since the book was first published in 1862. Valjean and Javert: pursued and pursuer, the saintly improviser versus the psychotically rigid lawman. These two are each other’s destiny—the one an example of the human capacity for transcendence, the other a man who denies anyone’s ability to change in the least.

Strong stuff, but apparently nobody connected with this movie was satisfied with mere strength; this production wrings our withers, then wrings them again and again. Was there ever a story (outside of Dickens) in which so many young people expire to elicit our tears? Far from mitigating the sentimentality, Hooper has his camera constantly hover so close to the singing, weeping, bellowing, gasping faces that I wondered if his interest in his performers was more surgical than dramatic. This is the cinema of dermatology.

Despite the musical’s popularity, many critics have looked down on it, comparing its score with the music of Andrew Lloyd Webber. That isn’t quite fair. Webber pounds to death one tune per show, whereas Schönberg cleverly uses countless variations of a handful of melodies to show the connections and dissonances among the characters. It’s the Wagnerian leitmotif system gone pop. Sadly, though, the movie’s two male leads don’t serve the music well. Although Hugh Jackman has done several stage musicals on Broadway, he supplies a surprisingly constipated, often unpleasant voice for Valjean. Still, his rapport with his character somehow breaks through his vocal limitations. By contrast, Russell Crowe’s inability to sing completely undermines his performance as Javert. Playing another fanatical cop in L.A. Confidential, he was an unforgettable embodiment of bottled-up rage, but here he seems merely vague and faintly quizzical, thus vitiating Javert’s baleful power. The younger members of the cast do better musically. While Anne Hathaway will doubtless win an Oscar nomination for her performance of Fantine’s marathon meltdown, “I Dreamed a Dream,” it was Samantha Barks as Éponine who impressed me most—both for her singing and for the expressiveness of her face.

But, again, it’s the story itself that carries the film. Its characters, unlike Tolstoy’s, exist less as psychological studies than as brightly colored figures in a spectacular painting. Whatever its faults, this Les Misérables doesn’t lack brio. You might feel bullied by it, but never bored.