The Decline of Catholic Marriages 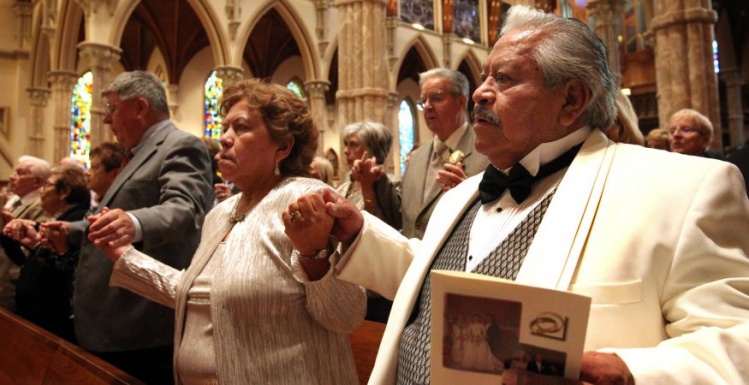 The number of marriages overall in the U.S. has not shown this steep a decline in absolute numbers, despite generally lower rates of marriage in the population as a whole. About 2.2 million marriages of any type took place in 1970, about equal to the number still taking place each year today. 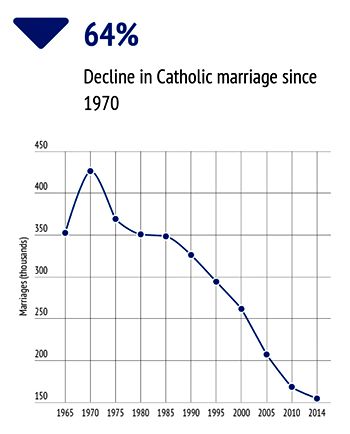 The decline in Catholic marriage reflects in part a larger societal trend away from marriage. In 2011, barely half (51 percent) of adults 18 and older in the U.S. were married, compared with 72 percent in 1960. Also, those who do marry are marrying later: the median age for first marriages in the U.S. is now 29 for men and 27 for women, compared with a 1960s median age in the early 20s for both sexes.

However, these trends do not alone account for the decline in the number of Catholic marriages, which is far more precipitous than overall marriage trends suggest it should be. The decline also cannot be explained by an increase in the percentage of Catholics marrying non-Catholics: Research from the Center for Applied Research in the Apostolate (CARA) reported that more than 70 percent of Catholics are married to Catholic spouses, with younger Catholics only slightly more likely to report being married to a non-Catholic. The data therefore suggests that over recent decades, a significant and growing percentage of Catholics—perhaps a majority—are marrying outside a Catholic setting, even when they are marrying another Catholic. The proportion of Catholics who are entering marriages defined as “invalid” by the church, therefore, is growing rapidly. (The consequences of being in an invalid marriage are expanded on here.)

While there is not conclusive research about the reasons for this trend away from Catholic marriage, among the possible causes are:

This is the first of four explainers in our reading list on Catholic marriage today.

Prophecy without Contempt – A Commonweal Event Monday, March 7 in NYC (and live online)