Could the Church Take a Risk?

Thinking About Abortion after Ireland
By Cathleen Kaveny 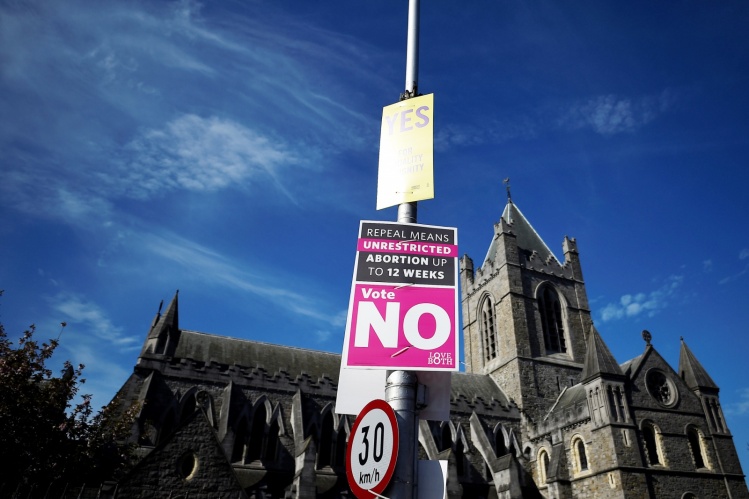 Posters outside of Christ Church Cathedral in Dublin in May 2018 (CNS photo/Clodagh Kilcoyne, Reuters)

On May 25, the Republic of Ireland voted to remove the matter of abortion from its constitution. More specifically, the Irish people voted to repeal the Eighth Amendment, which requires the law to give equal protection to pregnant women and their babies. Passed only in 1983, the amendment was widely interpreted as prohibiting abortion in all cases except when the life of the mother was in danger.

The vote in favor of change was a landslide. Many American commentators, both liberal and conservative, proffered a common interpretation: it was a decisive rejection of traditional Catholicism, and an unhesitating step toward modern democratic values. Liberals applauded the Irish for finally coming around, while Catholic conservatives decried their apostasy.

But what if that interpretation isn’t quite right? What if the Irish are trying, as best they can, to deal with real conflicting values raised by the issue of abortion? What if we Americans really can’t see those conflicts because a key aspect of Roe v. Wade still has the imagination of both pro-lifers and pro-choicers in a vice grip? Roe held that the unborn are not “persons” entitled to the full protection of the law. At the same time, the Roe majority opinion indicated that if they were “persons,” the case for legal abortion would “collapse.” So Roe tied the moral and legal legitimacy of abortion to the lack of personhood of the unborn. This conceptual bond has shaped the American debate for the past half-century. It has also constrained any progress in public discussion. I believe the time has come to rethink it.

Pro-choice activists emphasize the need to protect the rights to physical integrity and autonomy of the pregnant woman. What about the rights of the unborn? Since many pro-choice activists follow Roe in viewing the unborn only as potential human persons, they don’t see a real conflict. The right to autonomy and bodily integrity of the actual person—the pregnant woman—clearly trumps. The problem of abortion is dissolved rather than solved.

Pro-life activists flip the script. They see the unborn as equally protectable persons and abortion as wrongful intentional killing. Accordingly, the fact that the unborn resides within and depends upon a particular woman’s body is not morally decisive. Ultimately, in this picture, the woman’s body is nothing more than the mere circumstance of the wrongful killing—it answers the question where the homicide occurs, and perhaps mitigates the woman’s culpability, but it does not change the moral character of the act. This stance also dissolves rather than solves the problem.

But what if the script needs to be tossed out entirely? What if both the following propositions are in fact true: 1) abortion (at least after the possibility of twinning has passed) does involve taking the life of an individual human being, who deserves protection as a person; and 2) that unborn person is in fact completely physically dependent upon the pregnant woman. Growing the unborn person, and delivering her to the wider world, imposes physical burdens on the woman that are both substantial and morally relevant.

And what if the truth of both propositions has only become more apparent to most people in recent years? On the one hand, 3-D ultrasounds have strengthened our perception of the unborn as “one of us,” while on the other, the #MeToo movement has heightened our understanding of the radical vulnerability of women’s bodily integrity.

If we hold these two propositions together, we are going to see abortion as a unique legal and moral problem, because it does not fall neatly under one normative description. The act of abortion can potentially be described as 1) the intentional killing of a human person, which is generally prohibited by law; and 2) the refusal to provide substantial bodily life support to another person, which is generally legally permitted even in circumstances where it is not morally condoned. For example, parents are not legally required to give their children life-saving blood transfusions or organ donations, no matter how trivial their reasons for refusing to do so. The right to bodily integrity is not some recent invention of liberal secularists; it is firmly rooted in Western law.

The constitutional question is settled in Ireland, in that abortion is no longer a matter of constitutional law. But the discussion of other questions, both legal and moral, is just beginning to open up.
sharetweet

What if the best way of reading the Irish vote is not as a wholesale leap from a thoroughgoing Catholic piety to stark secularity, but instead as an awkward and messy attempt to balance these two perspectives? After all, many people who voted “No” still had reservations about the hard cases of rape and incest, and many people who voted “Yes” were worried that the legal framework proposed by the government did not sufficiently attend to the dignity of fetal life. But they did the best they could given the options available to them. Most people were unable to sort through the myriad conflicts of particular cases. I suspect that what most wanted was for abortion to be “safe, legal, and rare.” They picked the option on the Eighth Amendment that seemed to them most likely to produce that result.

The constitutional question is settled in Ireland, in that abortion is no longer a matter of constitutional law. But the discussion of other questions, both legal and moral, is just beginning to open up. The church has a choice. It can simply repeat already well-repeated teaching: no sex until marriage, no contraception within marriage, no abortion—period. If you are not aboard that train of “No”s, then we have nothing helpful to say to you: just one more big “No.” When people walk away, the church could say “good riddance.”

Or the church could take a risk. I wonder: with the legal issue settled, could the church facilitate difficult moral conversations that engage people caught in today’s bewildering flux of sex and relationships? Could it, for example, facilitate a conversation in which people ask themselves what their responsibilities are toward each other and toward a potential baby if they engage in consensual sex—marital, premarital, or extramarital? Can we talk frankly and respectfully about whether and when women who engage in consensual sex have a moral obligation to carry any resulting pregnancy to term? At the same time, could the church lend a sympathetic ear to victims of rape and their families, and try to understand why so many people recoil at the idea of forcing such victims to bear their rapist’s child?

Could the church even try to grasp why so many women cannot cope with the idea of giving birth to or raising a child with significant disabilities? This may prove the most neuralgic and challenging discussion, because it implicates the bedrock commitment of contemporary Catholic social teaching to the equal dignity of every human being, including the differently abled. But there is an enormous gap between Catholic social teaching and common moral judgment. The vast majority of women who discover they are carrying a Down syndrome baby seek abortions rather than give birth.

The church could enter into these conversations with the moral humility born of historical perspective. After all, it is not as if children with disabilities or born from crisis pregnancies were well treated in the days before the sexual revolution. In the 1950s, more than eight-hundred children were born, died, and dumped in a mass grave at a Catholic home for unwed mothers in Tuam, Ireland. They remind us that the rejection of abortion does not always spring from wholehearted respect for the dignity of new human life.

Many conservative Catholics fear that these conversations are the gateway to confusion and moral relativism. I see it differently. A fundamental tragedy of this broken and sinful world is that the most vulnerable persons—the unborn, the disabled, the needy—are often completely dependent upon persons almost as vulnerable as themselves. Part of the “accompaniment” called for by Pope Francis, I believe, is a willingness to help bear the burdens of these conflicts. The first step is a willingness to hear about them in unvarnished and open conversation.