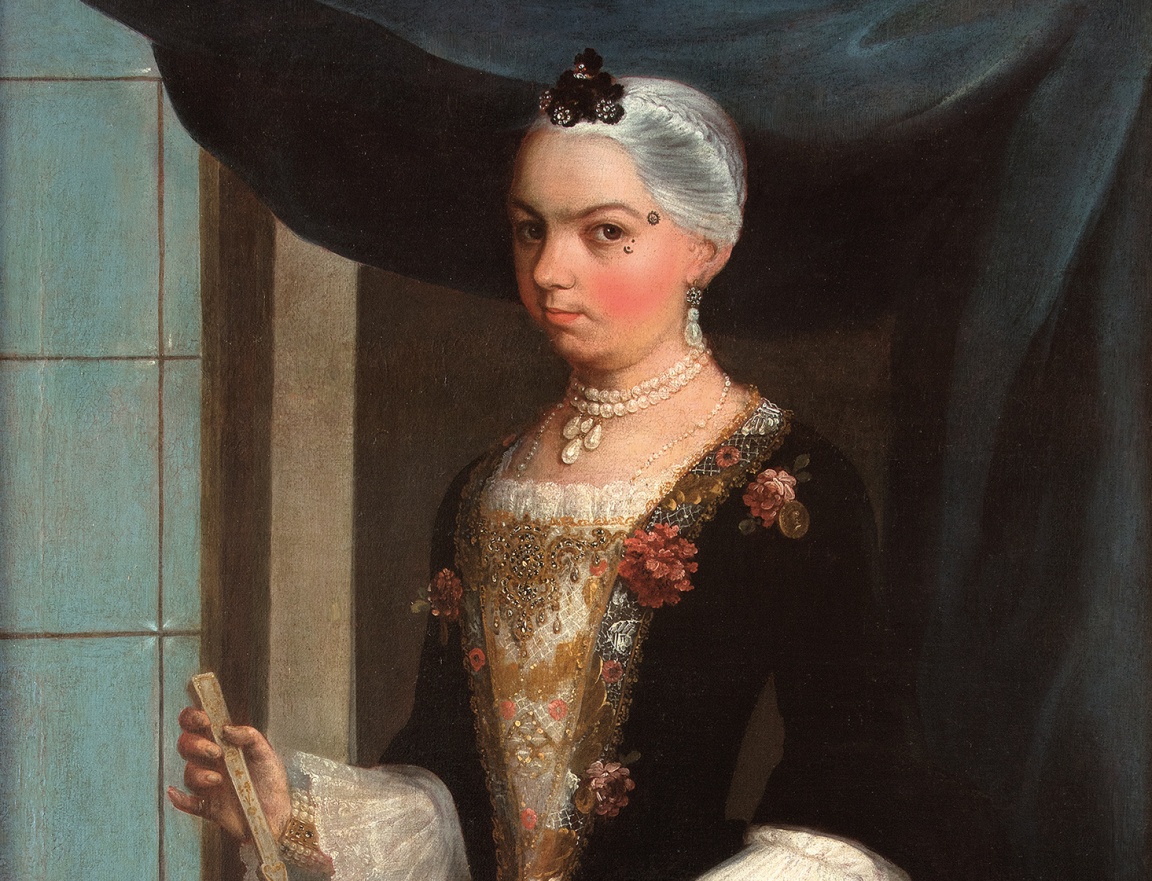 The Met’s Other Catholic Show

Heavenly Bodies: Fashion and the Catholic Imagination, on view at the Metropolitan Museum of Art in New York City, May 10, 2018 through October 8, 2018

You’d never guess it from her portrait, but at the age of sixteen the Mexican aristocrat Doña María Tomasa Durán López de Cárdenas entered the Convento de Santa Brígida in Mexico City and professed vows as a Brigittine nun. The painting is one of the most striking in the Metropolitan Museum of Art’s new exhibit, Painted in Mexico, 1700–1790: Pinxit Mexici, one floor up from the popular Heavenly Bodies: Fashion and the Catholic Imagination. As the Mexican artist Juan Patricio Morlete Ruiz has rendered her, María Tomasa might have felt right at home with the celebrities at the Met Gala. Posing before a blue velvet curtain by a large window in three-quarters profile, she wears fine fabrics of black and gold with lace trim, red roses, pearls, rings with precious stones, powdered white hair, and artificial beauty marks (known as chiqueadores). Yet her piercing stare is at odds with her fashionable dress. As if anticipating her future in the monastery, María Tomasa seems to be questioning the value of the riches that adorn her. Is haute couture at odds with religious decorum? What is the relationship between visual beauty and God?

Though it’s received far less attention than the show just downstairs, Painted in Mexico likewise immerses viewers in the Catholic visual imagination, albeit in a quieter, less flashy way. The exhibit, with more than a hundred objects (mostly paintings, but also a few large prints and rare books), debuted last year at the Los Angeles County Museum of Art before traveling to New York City earlier this spring. It mounts a comprehensive survey of eighteenth-century Mexican “viceregal art,” so called because the country was then part of the Spanish Empire. Deemed at once too conservative, derivative, and sentimental when compared with European painting of the same period, viceregal art has until recently received scant attention from art historians and American museums. Its baroque repertoire of portraits, landscapes, and Catholic devotional imagery, the argument goes, lacks the raw creativity and revolutionary fervor of modern Mexican masters like Frida Kahlo, Diego Rivera, and José Clemente Orozco. It’s an unfortunate prejudice, one that the curatorial team of Painted in Mexico is eager to refute. The exhibit’s seven sections, each boasting an “unimaginable wealth of images” discovered in convents and churches across the country, energetically reveal eighteenth-century Mexico as a center of artistic, intellectual, and spiritual flourishing. 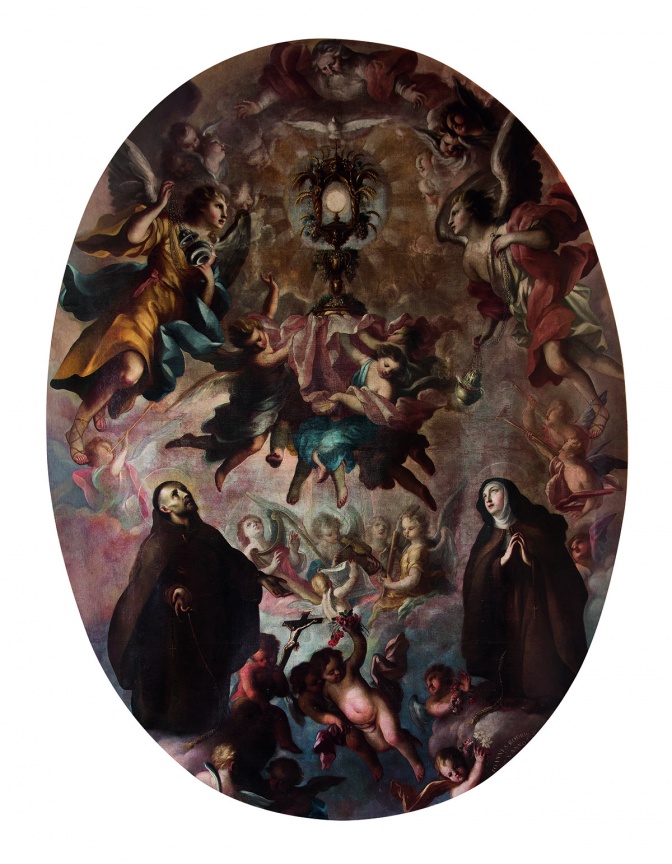 The show begins with a monumental masterpiece, Juan Rodríguez Juárez’s Apotheosis of the Eucharist. Painted in 1723 for the high altar of the Franciscan convent of Corpus Christi in Mexico City, it is set within an oval frame more than thirteen feet tall, towering over visitors as it draws them in from the outside hall. Dizzying ranks of angels—some waving censers packed with incense, others blasting trumpets or plucking harps (one even plays a bassoon)—swirl about a gilded monstrance, the bright host at its center radiating light through the cloudy heavens. The sky’s tones of light blue and pink contrast with the dark brown habits of Saints Francis and Collette, who kneel in prayer in the left and right foreground below. Juárez paints the pair with grave realism, their robes unruffled by the winds, their postures steady. It’s as if they belong more to our world, the realm of ordinary sensory experience, than to the visionary scene unfolding in the painting. But their twin gazes, directed upwards, converge on the host, which itself becomes a visual fulcrum mediating between heaven and earth. Juárez’s painting is thus more than merely decorative: like the sacrament it portrays, it becomes an image that draws us into spiritual communion with the God beyond images.

Such theological sophistication didn’t happen by chance. Mexican artists like Juárez, along with fellow painters such as José de Ibarra and Miguel Cabrera, were fiercely conscious of their considerable talents. Together they sought to raise the intellectual and social status of their profession, organizing themselves into formal academies, signing their paintings with the Latin phrase Pinxit Mexici (painted in Mexico City) as a mark of pride, and granting themselves the exalted title of profesores. Cabrera himself even wrote a treatise on painting, the Maravilla Americana, in which he argues that the famous icon of the Virgin of Guadalupe was made not by human hands, but rather painted directly by God. (The book, along with a painting of God the Father seated at an easel with palette and paintbrush, is on display in the exhibit’s third section.) Citing examples like Michelangelo and Raphael, the text goes on to describe painting as an “angelic” language more supple than the written word. In this view, painters perform a sacred function, analogous to scriptural authors, even to God himself: where words fail, visual beauty speaks.

One display of winged gowns, recalling Fra Angelico and accompanied by soaring chant, helped me to better grasp what Dante himself might have seen (and heard) in the Paradiso
sharetweet

A similar claim is made for fashion designers and their Catholic-inspired couture in the Heavenly Bodies exhibit, on view through October 8. When I went to view the Painted in Mexico show a few weeks ago, I took a detour through the Met’s medieval galleries, where the bulk of Heavenly Bodies is displayed. It was exciting, even moving in parts. The medieval galleries, usually calm and otherwise almost always empty, had been electrified by the crowd. Sculptures, paintings, and illuminated manuscripts suddenly sprang to life as they appeared alongside the contemporary costumes they had inspired. One display of winged gowns, recalling Fra Angelico and accompanied by soaring chant, helped me to better grasp what Dante himself might have seen (and heard) in the Paradiso, while tiny scenes from the life of St. Francis, embroidered into a golden chasuble from the Vatican Collection, made me marvel at the sheer skill that had gone into making them. 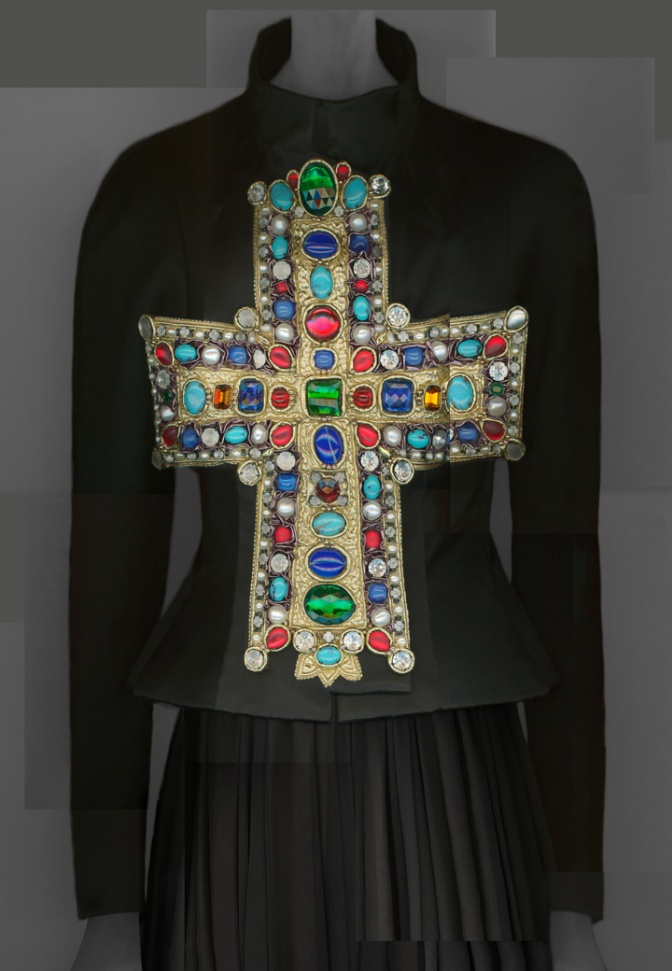 And yet, with its overpowering emphasis on splendor and style, the show disappointed me. It’s not enough to claim, as Heavenly Bodies repeatedly does, that beauty is central to the Catholic imagination. It’s true that for Catholics visual beauty (in painting, sculpture, fashion, architecture, etc.) reflects the beauty of God. But the show never explains how beauty connects its beholder to God—a dynamic that key thinkers of the Catholic intellectual tradition, like St. Augustine, St. Bonaventure, Dante, and St. John of the Cross, have often explained by using the metaphor of the journey. Aesthetic beauty is for them a first step, one rung on the ladder up to God. But it can never become the permanent center of our attention, nor the sole object of our desire. Instead, beauty functions more like a signpost: it catches our attention and points us in the direction of its source, the divine Beauty that transcends all concrete forms. Fashion items such as Sorelle Fontana’s sleek “Il Pretino” dress or Christian Lacroix’s bejeweled “Gold-Gotha” ensemble, hardly sacrilegious or offensive, are quite beautiful. Still, beyond a visual nod to their sources (clerical cassocks, the crux gemmata of Byzantine mosaics), in their fascination with the mere aesthetics of Christianity they fail to gesture toward anything beyond themselves.

The religious works in the Painted in Mexico show were created for a different purpose—that is, as aesthetic aids to prayer. Spread generously throughout the exhibit we find an impressive range of them: “nun’s badges” (painted on copper and worn over habits during vow ceremonies), spiritual allegories (didactic images for men and women religious, often paired with texts in Spanish, often quite sensational—such as an amorous Christ posing coquettishly in a bed of flowers), and “effigies” (detailed paintings of miracle-working statues, like the Virgin of Sorrows or the Christ of Ixmiquilpan).

But no work more clearly illustrates the concept of visual art as a path to God than Miguel Cabrera’s 1766 The Miracle of Saint Aloysius Gonzaga and the Novice Nicholás Celestini. Originally hung in a house of formation for Mexican Jesuits, the painting narrates the story of Celestini’s miraculous recovery from a mortal illness through Gonzaga’s intercession. Cabrera divides the canvas into two distinct visual fields. In the foreground, lit by a candle but shaded in chiaroscuro, we see Celestini on his deathbed, surrounded by everyday objects (like a breviary, a chair, and a cup of tea) and attended by a priest and two novices. In the background, at the top of the composition, we find the blazing image of the Sacred Heart, set in a swirl of angels similar to Juárez’s Apotheosis of the Eucharist. Gonzaga, dressed in a black robe, stands on a puff of cloud between the two planes, looking down at Celestini and murmuring a prayer (legible in a “speaking scroll” of golden letters cascading downwards) as he gestures up to the Sacred Heart. Celestini responds by consecrating himself to God’s service. 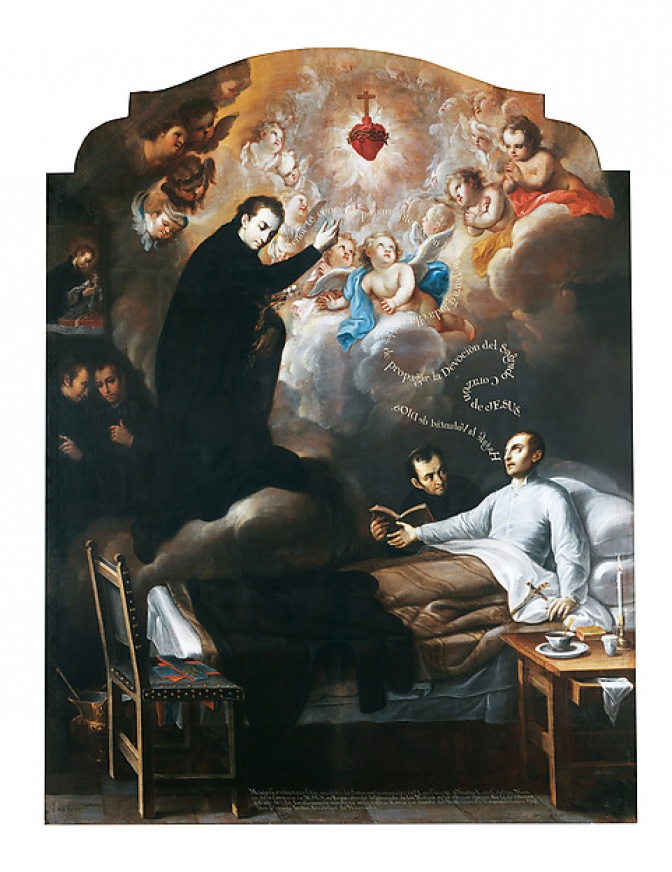 As in Juárez’s Apotheosis, Cabrera presents two worlds—the one visible to our eyes, and the other discernible only by the soul—mediated by a single object. Just behind Gonzaga’s shoulders and above the pair of distraught novices, Cabrera has placed a small painted icon, positioned at the very point in the canvas where the lines of the two visual fields intersect. It’s a portrait of Gonzaga himself, lovingly holding a crucifix. The icon serves as a hinge between the darkness of Celestini’s bedroom and the luminous heavens above—the place from which his salvation comes. Here a work of art, an object of aesthetic beauty, literally saves the novice by bringing him back to life.

The Catholic imagination, as it emerges from the works in Painted in Mexico, thus makes extraordinary claims for the power of visual art. Not only does it suggest that “the world will be saved by beauty,” as Dorothy Day, following Dostoevsky, would have it. Studded with paintings that combine technical skill with a sense of divine mission, Painted in Mexico stubbornly insists on something far more radical: that pictures, gateways to heaven and bridges for the soul on its way to God, have the very power to rescue us from death.