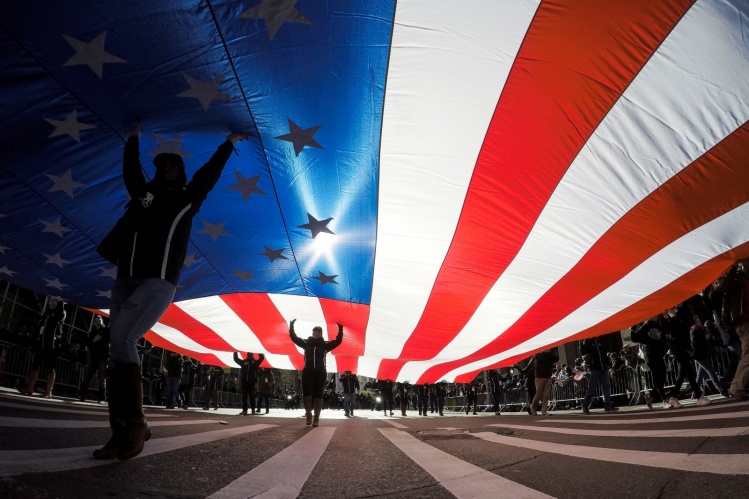 How can we uphold democracy without understanding it? (CNS photo/Eduardo Munoz, Reuters)

I spoke to a remarkable woman forty years ago when I was doing freelance work for a polling firm in Washington D.C. It wasn’t civic or political commitment that motivated me; I was just an undergraduate who needed some extra pocket money. I didn’t know or really care who had commissioned the survey, though from the list of questions, I later surmised that it was the Republican Party.

The script required us first to ask the name of the current president and vice president—then Jimmy Carter and Walter Mondale—presumably to establish the respondent’s level of engagement and awareness. But that was already almost too much for my interlocutor. “Oh, gosh,” she said, her voice quivering, “I don’t actually know that. I think I knew the last two but I’m not sure who it is now.”

I could tell that she wanted me to give her a hint. After all, she was failing the most basic quiz in American civics, and she was audibly embarrassed. But she was kind and generous too, explaining that she wanted to help, but with all the work on the farm there just wasn’t enough time to follow politics as much as she would like. She hazarded a few guesses, but not correctly. “Could we go on and maybe come back to that question?” Probably going too far (from the perspective of my employer), I told her not to worry about it, that I understood.

And I did. As it happened, I was calling residents of rural northern Michigan, a place I’d known since my childhood, when my parents bought an abandoned one-room schoolhouse there and converted it into a summer cottage. My five siblings and I spent countless happy hours on the neighboring farms. We played in the steaming haymows and among the gravestones of the township cemetery, and swam in the freezing water that filled the excavations at the gravel quarry. I came to know the routine of farm life: play, but only after the work is done, and no real vacations, because the cows have to be milked twice a day, every day. The bone-chilling waters of the quarry were tolerable only because we were always so sweaty and dirty from sharing in the work of hoeing beans, milking cows, and baling hay.

Listening to the woman on the other end of the line that night, I couldn’t help picturing our farmer friends’ mother, Mrs. Guza, who served us plates of eggs and stacks of toasted homemade bread after morning chores whenever we spent the night. She worked nonstop all day through dinner, which ended only after we had pushed our chairs neatly up to the table, knelt in place, and prayed a decade of the rosary together. She and the girls started us off on each “Hail Mary,” and the deeper voices of Mr. Guza and the boys joined in about halfway through, taking over the second half. We prayed our parts according to our gender in lilting rounds, reassuring in their dusky rhythms. Day was done at long last; but at that point, you didn’t have much energy for anything but bed. We used to joke that it would be hard to get in trouble on the farm. There was just no time or surplus energy.

So when was my respondent—the woman on the line from northern Michigan—supposed to brush up on politics? She humbly regretted her knowledge gap; I consoled her again; and we ended the call. I’m not sure if it ever qualified as suitable data for the poll. She has stayed with me all these years. Her generosity and honesty cheer me still; her political illiteracy continues to make me uneasy about the American electorate.

One of my required courses at Georgetown that year was in political theory, and I remember secretly wondering if some of those classical philosophers notoriously wary of democracy might be right after all. Are “the people” up to it? How many others like that woman are out there? I was torn, but only secretly, of course, because these are questions one dare not ask publicly without seeming an ogre. Simply to pose the question is an abomination to many, perhaps particularly to liberals, because it flushes into the open things we’d rather not talk about. To raise the question about others’ educational status—to imply that some minimum fund of civic education may be necessary for successful participation in our democracy—is taboo, because it touches upon the class differences that have discomfited Americans since the founding of this country, and the very economic disparities that may explain the current divide in American politics.

Barely articulated, let alone carefully considered, the concern about civic ignorance tends to evoke forceful objections, rapidly snowballing beyond the issue itself. What, you want to introduce a literacy test? (For the record: no, I really don’t.) What, you assume that education goes hand-in-hand with democracy? (This is where I would be reminded of all the PhD’s in the Nazi party.) Or finally: Are you really so naive to think that civic education will reduce partisan fractiousness? (Again, no.)

But most damning of all—from an American perspective, at least—is the way in which the question becomes incontrovertible proof that the inquirer is after all an unreconstructed elitist, an enemy of democracy, who mistrusts the inborn wisdom of the common people. To even speak of ignorance not your own is just bad manners, possibly worse.

Privately, over a beer, I can get people to admit the problem, especially if I formulate it euphemistically. So let’s call it a “civics deficit” instead of ignorance. My liberal friends assure me that it is merely a symptom, and will resolve on its own once we’ve addressed the great issues of the day: the corrosive influence of money in politics, or the real behemoth of “shareholder primacy” capitalism—the unfettered, neoliberal incarnation that has brought about unprecedented wealth and income disparities in this country and around the world.

Since taking office, Trump has relentlessly undermined our democracy in part by exploiting our ignorance of it.
sharetweet

To this group I would simply say, bravo! Let’s indeed find our way back to a “social market economy” (to borrow a bipartisan term from German postwar politics), and in doing so maybe learn the difference between social and socialist. But in the meantime, can’t we also seek to redress this particular knowledge deficit? Do we have to let our addiction to “root causes” keep us from a pragmatic intervention that might make a difference in the near term?

The more insidious attempt to snuff out any discussion comes from the right, exemplified most recently, of course, by Donald Trump. If to lament the widespread civics deficit is, as I’ve said, indisputable proof of class superiority, this becomes particularly useful fuel to stoke voter resentment. For it is a paradoxical and at the same time utterly familiar ploy in American politics to deploy class antagonism while simultaneously denying class distinctions. Liberals attempting to address social injustices are accordingly branded as waging a “class war,” whereas tax benefits that indisputably favor the extremely rich are pitched as a boon for all Americans. Democrats who agitate for gun safety and reproductive health rights are dismissed as “coastal elites,” while wealthy Republicans—who are of course elite by every measurable index—insist they are just everyday Americans. So, no matter how hard we try to make it go away, the question remains: How can people with little or no grasp of our democracy participate meaningfully? How can we countenance this disparity?

Like it or not, key issues facing America today really do require a modicum of civics literacy. You can’t discuss reforming the electoral college—which may once again overturn a popular vote in the coming election—if you don’t have at least some idea about what it is. Debates about gun rights need to proceed from a basic understanding of the nature of Constitutional amendments—how they come about, and how they are sometimes revised and superseded. The right to bear arms is no more sacrosanct than Prohibition, which was both instituted and dismantled via constitutional amendment. And policy discussions about gerrymandering and voter suppression need to be grounded in the Constitution's promise of equal representation. Perhaps most importantly, everyone needs to have at least a rudimentary understanding of checks and balances, the founders’ ingenious arrangement of federal power meant to keep any one branch from becoming authoritarian. But that only has a chance of working if it is first understood.

Banking on the fact that viewers wouldn’t know the difference, Donald Trump in the 2016 presidential debates repeatedly made Hillary Clinton responsible for virtually every federal failure he could think of—because after all, she “was in the government, and didn’t fix it.” Understanding the scope of the secretary of state’s constitutional authority—the job Clinton actually held—may not have changed many voters’ minds, but it would at least have made for a more honest debate. Since taking office, Trump has relentlessly undermined our democracy in part by exploiting our ignorance of it.

In 1938, Thomas Mann, probably the most famous exile from Nazi Germany, toured the United States, assuring his auditors that “America needs no instruction in the things that concern democracy.” Even as flattery, this line could not possibly be spoken today. It is too obviously at odds with a demonstrable widespread ignorance, which itself has proven a valuable tool for political division, and thus not something Trump and his Republican enablers actually wish to eradicate.

The woman I spoke to that evening on the phone four decades ago cared about this country and wanted to do better. In taking a call from an overeager teenager who identified himself as calling from “our nation’s capital,” she may have thought she was answering a call to duty. She was embarrassed when she faltered, because she had higher aspirations both for herself and her family; she was not proud of her ignorance.

We should give her the chance to do better. Imagining that democracy is something that just comes naturally to the American people is a fatuous assumption that Trump is counting on. For too long we’ve assumed that shared myths—such as this being a country of immigrants—could compensate for a deficient grasp of our own constitutional order. We are seeing now that that no longer holds true, if it ever did.

“Verfassungspatriotismus,” that behemoth term Jürgen Habermas developed to help postwar Germans move beyond ethnic notions of national belonging—to constitutional patriotism—is something Americans desperately need now. Because no matter how many flags you wave, you can’t really be patriotic without knowing some basic civics.

‘What If You Woke Up One Day and All the Arabs Were Gone?’