‘What If You Woke Up One Day and All the Arabs Were Gone?’

“Can you guess what this object is?”

We’d arrived at the last vitrine in the impressive Ghetto Fighters’ House Museum (Beit Lohamei Haghetaot) in western Galilee, and Neta, our genial guide, really wanted us to see it before we left. You could tell it was important to her.

The article in question is a real puzzle: a thin piece of wood from which dangle two little cords of equal length, each with a wooden spike at the end. What could it be? We’re a responsive and fairly talkative group of academics working in the area of Holocaust Studies, so several colleagues take a stab at the question, each unsuccessfully. We who thought we’d seen everything couldn’t identify it.

Having whetted our curiosity, Neta explains that there were five women in the underground in one of the camps determined to divide their meager daily provisions more or less equally. When it came to the daily portion of soup, they could think of nothing other than to take turns, one each day. After all, how does one measure a slurp? And how do you stop yourself once the liquid is lifted to your lips?

But when it came to their daily bread, they found a solution. The curious device now on display in this overlooked Holocaust museum that predates the august Yad Vashem in Jerusalem served camp inmates as a simple, handheld scale that allowed them to determine that the pieces they shared were more or less the same size and density. The women all wanted to survive, but in solidarity with one another—not at each other’s expense. You see, Neta concludes, even in the camps a deep sense of humanity was possible. Even under these horrific conditions.

While sobering enough, Neta’s lesson—and that of the museum itself—is not one of unmitigated despair and abject despondency. In fact, there is almost a sense of a Christmas gift to it, at least to those of us who so desperately want to believe that a modicum of humanity clings to each of us, even at the worst of times. Not quite Anne Frank’s resounding conviction that “people are really good at heart,” but hopeful nonetheless.

And this is clearly the point that Neta wanted to make.

While sobering enough, the museum’s lesson not one of unmitigated despair and abject despondency
sharetweet

Neta is a born teacher, and she treats the museum, founded in 1949 and designed by survivors, as her classroom. It is the first museum in the world to document the Holocaust of European Jewry. She begins her presentation by pointing out the pedagogical design: exhibits are meant to be explored, interactively if possible, and then discussed as a group. Each room is equipped with benches in the round so that visitors can face each other and talk about their impressions, and the lessons to be taken with them into the world.

Unlike the United States Holocaust Memorial Museum in Washington, D.C., the Ghetto Fighters’ House is not to be experienced individually, in hushed and darkened silence. It is not a mausoleum, meant only to offer an opportunity for private grief. Like the kibbutz that created it, this museum was meant to enrich life in the present, ensuring that those who died will have the legacy of which their Nazi tormentors sought to deprive them. 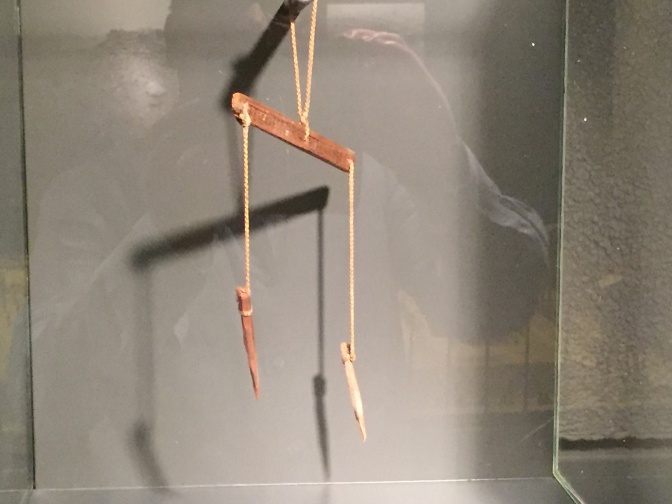 The simple, handheld scale used by five women to measure out food

Neta models for us the teaching she typically does with Israeli students, and we are enthralled. We gather around a large wooden table and read aloud passages from Holocaust testimonials contained in massive books, written in Hebrew and English, that bear the unlikely title “And Not a Single Life Was Lost.” Eventually we discover—for all good learning is a discovery—that the title refers not to the Holocaust, but to the post-Holocaust work of one of the survivors, who as a midwife brought hundreds of healthy children into the world. And that is the whole point, Neta insists. This “House” is meant, she explains, not only to commemorate the dead, among whom number many of the brave inmates who mounted daredevil rebellions in camps and ghettos knowing their chances of survival were slim.

For they were fighting for a better world, Neta reminds us, one in which the rights of minorities are protected, the weak bolstered, and the marginalized safeguarded. Sometimes Neta’s students are Israeli soldiers who, she says, need to learn not only how to fight, but why they are fighting.

As we file out, I ask how this humane and compassionate message informs her teaching about the Palestinian and other minorities in contemporary Israel. She is shaking her head before I finish my question. “No, no,” she says; “the government does not allow us to discuss politics in school, and I support this position.”

I’m baffled, so she reassures me: “I make the point, and hope it sinks in. That’s all I can do. I can’t explicitly relate it to the present conflict.” Really? I sputtered something to the effect that this reminds me of Soviet-style government control. As an American, I just couldn’t fathom this kind of restriction. “Really?” she retorted, “I think there are schools in your country where you can’t even mention Darwin.”

We are already well into our thank-you’s and good-byes, so there isn’t an opportunity for the kind of in-depth discussion her own exemplary pedagogy would have demanded. She senses my disappointment, takes me aside, and says: “Look, I once asked my students: What if you woke up one day and all the Arabs were gone? What would you do? Wouldn’t you want to do something? Just as you wish the Germans would have done something when they saw your grandparents being deported?”

In the end, Neta displays a commitment to the same values of humane solidarity she so much admires in those five inmates who, in the midst of unfathomable deprivation and extreme hunger, took the time and energy to create a fragile device that would ensure the fair treatment of all. Including the non-Jews.