In the Company of the Brokenhearted 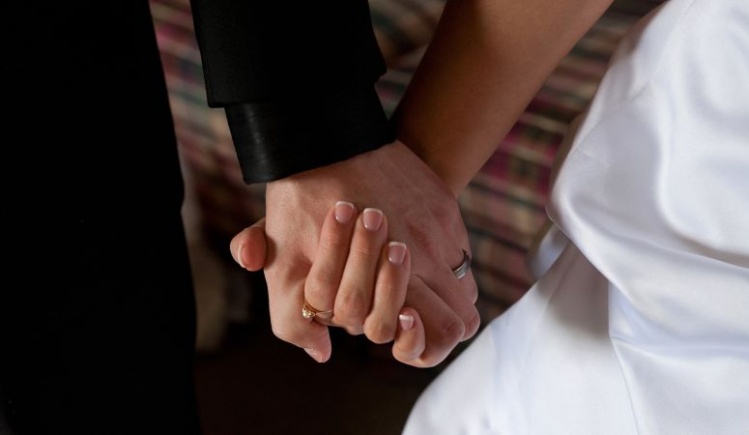 Pope Francis opens Amoris Laetitia (“The Joy of Love”), his new apostolic exhortation concerning marriage and the family, with a variation on a theme begun in his first exhortation, Evangelii Gaudium (“The Joy of Gospel”). A quick Google search to understand the difference between “Gaudium” and “Laetitia,” led to the “Father John A. Harden, SJ, Archives,” where Harden offers an illuminating explanation. Advent’s “Gaudium” is more inward rejoicing, like a missionary disciple’s abiding joy; Lent’s Laetare concerns rejoicing made manifest—Amoris Laetitia! Francis is celebrating the joy-filled witness of Christian marital love, the deepest truth of the sacrament’s indissolubility made manifest in the human flourishing and deepening of faith-filled charity in the daily lives of spouses, their offspring, and the communities composed of those families.

The indissolubility of marital love is surely the rock on which couples rest and to which they sometimes cling during crises. Francis regards indissolubility as a “gift” rather than a “yoke,” and chides those whose efforts to defend marriage reduce the gift to a “duty.” He assures us that Christian care for the divorced and civilly remarried is not “a weakening of its faith and testimony to the indissolubility of marriage,” but “a particular expression of charity.”

In some sense, the trauma that accompanies most divorces, even those guided by genuine spiritual discernment, testifies to just how powerful the marriage bond is. If married life were a piece of cloth being woven on a loom, divorce is not sharp scissors swiftly separating cloth from loom, and then creating two tidy pieces; it is more like a rough stick or protruding nail that rips the cloth off the loom, leaving two badly frayed, uneven pieces, a tangle of emotions and loss. Recognizing that marriages do fail does not lessen the trauma of divorce. In a way, the church’s teaching on marriage, as Pope Francis describes it, illuminates why divorce is so wrenching.

I am among those who know the trauma of divorce, something that a decade ago I could have never imagined. I also sought and was granted an annulment; I am now married in the church. In retrospect, those experiences revealed the wonders of God’s mercy as they deepened my faith in the Paschal Mystery and taught me more about humility then I ever wanted to learn. I was blessed to draw on a host of material and pastoral resources that, as the pope observes, are too often unavailable to the poor, leaving them “doubly vulnerable to abandonment and possible harm” and thus intensifying their suffering.

What follows are a few simple reflections on the complexities involved in the pastoral care of the divorced and remarried,  punctuated with stories from Catholics I know who saw in our common experiences of divorce a reason to confide in me.  Such stories raise many difficult questions, including the extent to which the church’s pastoral care means helping faithful Catholics to discern whether their “cross” comes in seeking a divorce rather than remaining in a troubled marriage. Deep feelings of failure and shame are often felt by those who seek a divorce. For example, one divorced person has confided in me her strong sense of God’s rejection. I assured this person that God never has and never will stop loving her. As Francis makes clear, the church must provide spiritual care as well as psychological and material support to all those going through divorce.

The utter simplicity of such a starting point belies the many challenges involved in pastoral care for the divorced and remarried. An extra share of wisdom, prudence, and patience are required. Above all, however, ministering to the divorced demands time—something most clergy simply do not have. How can the church better serve the many in need of such pastoral care? Pope Francis’s counsel in this exhortation seems to echo the “Joy of the Gospel,” where he urges the church to “initiate everyone” into the “art of accompaniment,” learning how to walk with another “reflecting our closeness and our compassionate gaze which also heals, liberates, and encourages growth in the Christian life.” Yet such accompaniment is risky and may turn out not as we hope.

I presume that the church is willing to take that risk in a desire to make manifest God’s reconciling love in Christ. In considering “irregular” marriages, Francis “reiterates” his message to the whole church: “the way of Jesus is the way of mercy and reinstatement” rather than “casting off.” “The way of the church is not to condemn anyone forever,” he writes, “it is to pour out the balm of mercy.” Like the synod’s bishops, he wants divorced and civilly remarried Catholics to understand themselves as “living members, able to live and grow in the church and experience her as a mother who welcomes them always.’” Yet, such desire removes little of the alienation felt by those Catholics in “irregular” marital situations.

The civilly remarried remain in a tenuous situation regarding sacramental participation, and many divorced Catholics simply feel unwelcome at Eucharistic liturgy. The annulment process, unlike civil divorce, can offer a pathway into Christ’s healing power. But for many people, the annulment process raises the prospect of reliving the trauma of a failed relationship. Many others do not have the economic means to proceed. The question remains: how can the alienated, and especially the poor and their children, come to know God’s infinite mercy?

Jesus, who incarnates God’s mercy, sought out the lost sheep much to the chagrin of his own religiously devout peers. He shared meals with tax collectors, prostitutes, lepers, and other outcasts. Have you ever wondered what they discussed? Did Jesus listen to their stories in the way Francis calls us to listen to one another? Perhaps the Gospel invitation most frequently ignored involves following after Christ who seeks out and listens to the stories of the brokenhearted. Such tasks are difficult, especially among those of us prone to self-righteousness or who are risk-averse.

Jesus’s parables illustrate the challenges. I will focus on two, beginning with the Prodigal Son. After a hard day’s labor, the elder son comes home to an unexpected party for his worthless brother, and he is furious. He lashes out at his father, who had never even given him “a young goat to feast on with his friends.” How often are views about the divorced and remarried like those of the dutiful elder brother, especially among couples who have remained in difficult marriages? That is, of course, completely understandable. Yet, the elder brother knows nothing of his sibling’s suffering, which presumably is result of his brother’s own bad choices. Similarly, those who resent the divorced often know nothing of their suffering, however self-inflicted. In the parable, our perspective is shifted away from the resentful son to the father’s prodigal generosity. “My son, you are here with me always; everything I have is yours,” the father tells the aggrieved elder sibling. To remain mired in self-righteousness removes us from God’s constancy and abundant care in our own messy lives. In “The Joy of the Gospel,” Francis explained how our willingness to accept accompaniment with those on the periphery “will teach us to be patient and compassionate with others, and to find the right way to gain their trust, openness and their readiness to grow.” The prodigal father gently invites his eldest son to accompany him into the banquet of abundant compassion that lies just across his own threshold.

Finally, I turn to a parable-inspired personal story. Someone confided to me an all-too-familiar tale of a failed marriage: a spouse now unrecognizable, openly engaged in an extramarital affair, shared on Facebook; depression so debilitating that getting out of bed even to attend Mass proved impossible. In the process of ending the marriage, the person returned to Mass on a weekday where the Gospel was Luke’s parable of the lost sheep. Jesus begins, as only Jesus can, with a crazy question: “What man among you having a hundred sheep and losing one of them would not leave the ninety-nine in the desert and go after the lost one until he finds it?” This question is really a response to those objecting to Jesus eating with sinners. I imagine his listeners murmuring to each other, “Did he say, ‘in the desert’?” and then muttering, “No one, Jesus. No one!” Of course, the lost sheep is found, and the shepherd (like the prodigal father) throws a party—for a sheep! Friends and neighbors partake in his joy, a joy like that in heaven when a single sinner repents. My confidant declared: “I was that lost sheep, and I knew at that moment that God had never stopped loving me. I realized that my faith meant everything to me.”

We will never know if all those sinners with whom Jesus ate repented, but we do know that he loved them to the end and that by doing so he alienated a lot of his religiously pious peers. Still, accompanying the divorced and civilly remarried is not about being “nice” or making them repent or capitulating to a disordered larger culture. In his new exhortation, Pope Francis, using a familiar Scripture-inspired marital image, calls the church to manifest Christ’s Amoris Laetitia. “‘The Bride of Christ must pattern her behavior after the Son of God who goes out to everyone without exception.’ She knows that Jesus himself is the shepherd of the hundred, not just of the ninety-nine. He loves them all. On the basis of this realization, it will become possible for ‘the balm of mercy to reach everyone, believers and those far away, as a sign that the kingdom of God is already present in our midst.’” Francis invites all of us into the parable’s world, to imagine ourselves as God’s beloved, awash in the “balm of mercy,” because that is who we are.

Sandra Yocum teaches theology at the University of Dayton.