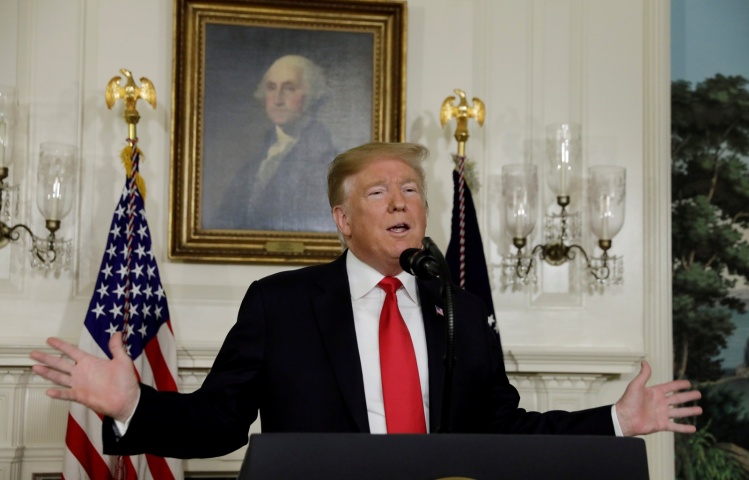 U.S. President Donald Trump delivers remarks on border security and the partial shutdown of the U.S. government from the Diplomatic Room at the White House in Washington Jan. 19. (CNS / Yuri Gripas, Reuters)

The day had begun with President Donald Trump tweeting at 5:49 a.m.: “The New York Times reporting is false. They are a true ENEMY OF THE PEOPLE!” It was probably not the best day for Tony Schwartz, a former New York Times reporter who propelled Trump to fame by writing the 1987 book Trump: The Art of the Deal. He had come to seek absolution from a gray-haired audience of more than a hundred people who had served long careers in New York journalism.

As NYU Professor Jay Rosen has written, journalism is a kind of religion, with its own priesthood, creed, ethics, and First Amendment protection. Many leave it to go to what they wryly call the “dark side,” better-paid work in public relations. I can’t think of any former reporter who has expressed so deeply the darkness this instilled in his soul as Tony Schwartz.

“The irony of being asked to address a group of journalists isn’t lost on me,” Schwartz said as he stood at a podium before a lunchtime crowd on February 20 at the National Arts Club in the Gramercy Park section of Manhattan. The group he addressed was the Society of Silurians, which, as its name may indicate, is made up mostly of old-timers. When I joined recently, I was told that I had brought the average age down; I’m sixty-five. So is Tony Schwartz. Much of the audience was from the journalistic generation responsible for our formation in the religion of journalism. Some attendees would qualify as high priests.

“I’ve been doing successive versions of this talk for two years now, and it’s in the service of absolution,” Schwartz said before taking questions at the conclusion of his talk. There was a bit of laughter in response. He continued, “I know that sounds funny but it’s 100 percent serious.” Schwartz, a tall, gray-haired man who wore a blue pinstriped suit and white shirt, took a deep breath. “I’ve struggled with my composure,” he explained, his voice choking. After twenty-nine seconds of silence—from him and from the room—he continued, “maybe because I carry so much shame about what I did. And this audience is the one that I feel most ashamed in front of.”

Schwartz said he was ‘ashamed’ at this misuse of his journalistic talents, which were considerable, to create a ‘largely fictional character’
sharetweet

A guilt-stricken Schwartz has been denouncing Trump since July 2016, when he saw what Art of the Deal had wrought. He says that as he researched the book, he quickly realized Trump’s attention span was too short for him to provide meaningful information; the real-estate developer became fidgety within minutes when they did an interview. So Schwartz simply started hanging around Trump’s office, day after day, listening in on Trump’s phone calls. He became keenly aware, he said, that Trump lied all the time, that he “lacks a conscience,” that he is a “sociopath.” Despite his reservations, Schwartz said, he crafted a refreshing, brashly charming Trump for a mass audience. “In the end, I created a character far more winning than Trump,” he said. The book became a No. 1 bestseller.

Schwartz said he was “ashamed” at this misuse of his journalistic talents, which were considerable, to create a “largely fictional character.” When he made his deal with Trump in 1985 at the age of thirty-three, he’d already been an editor at Newsweek and a reporter at the Times. He encountered Trump when he wrote a “merciless” New York magazine article about Trump’s effort to clear rent-regulated tenants out of a Central Park South apartment building.

Reading it now, the article doesn’t seem especially “merciless” or hard-hitting to me. Nor does the cover photo of Trump, with a five o’clock shadow, make him look like a “thug,” as Schwartz said. The article was a balanced look at the dispute. The main dig at Trump was that the tenants were winning. But it was very upbeat about all the “terrific” deals Trump had made. The late Sydney Schanberg wrote a much more pointed account of the tenant dispute in his New York Times column.

Much to his surprise, Schwartz said, Trump loved his article. In a subsequent discussion, Trump mentioned that he was going to write a book, and Schwartz said he suggested the title: The Art of the Deal. “I like that title,” he said Trump responded. “You want to write the book?”

To the best of my knowledge, journalism doesn’t have an office one can go to for absolution
sharetweet

Schwartz has evidently spent much time pondering what led him to eventually say yes to the deal. He indicated that it wasn’t just money—a $250,000 advance—but some deeper weakness in his psyche, a result of being brought up by a mother who was difficult because of her mental illness. He “grew up feeling inadequate,” which he addressed by seeking professional success. And his mother, a respected feminist and social activist, hated the idea that he was writing a book that would glorify Trump.

Schwartz is the founder and chief executive officer of The Energy Project, “a global consultancy focused on the invisible human factors that stand in the way of organizational transformation and sustainable high performance.” He is a practiced motivational speaker, and I thought initially that his audience of professional skeptics might dismiss his self-examination as psycho-babble.

But that wasn’t the case; it became clear that he had come to make a confession. “To write that book I pushed aside my concerns about the kind of man Trump was, and more importantly, the kind of man I wanted to be,” Schwartz said.

He has written additional books, and struggled to understand himself, deciding that “the worst of me didn’t negate the best of me.” As part of his effort to obtain absolution, he said, he’s given away the book’s $250,000 in royalties.

To the best of my knowledge, journalism doesn’t have an office one can go to for absolution. But I thought Schwartz’s audience found value in what he said, and perhaps even reflected on a comment that could apply to people in all walks of life: “My story is your story, to one degree or another.”