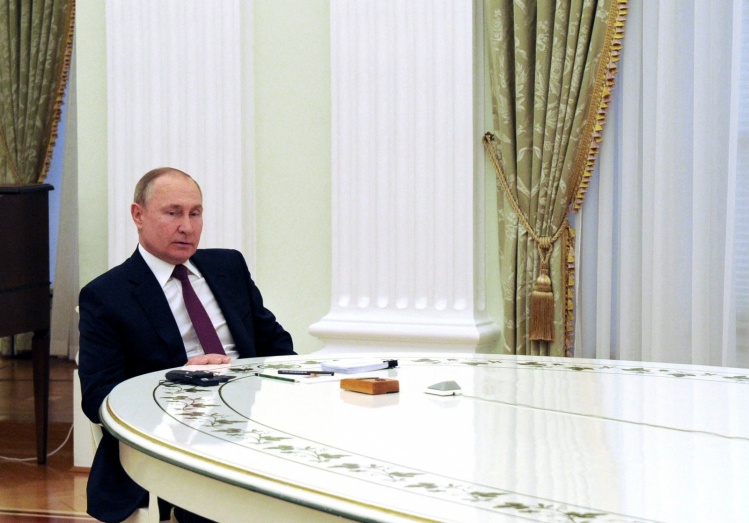 As we noted in January, Vladimir Putin “is an autocrat and a liar.” We now have been reminded that he also is a war criminal. Since Russia invaded Ukraine last week, that much is clear, but otherwise uncertainty reigns—and the risk of further, dangerous escalation remains high. When the Biden administration began warning over a month ago that an invasion was imminent, many commentators were skeptical, and the international response was generally hesitant. The first round of sanctions imposed by the United States and its allies was notably tepid. Now, amid the fighting, American politicians are pinning Ukrainian flags to their lapels and the names of faraway cities are on everyone’s lips. Enthusiasm mingles with confusion. Reporters on the ground relay the latest updates and governments release new statements amplifying their support for Ukraine and disapproval of Russia, while on social media there are TikTok clips teaching Ukrainians how to repurpose Russian equipment, tweeted maps of troop movements and lines of attack, footage of tanks rolling down highways, and photos of civilians in Kyiv and elsewhere, including elderly women, preparing Molotov cocktails. Dramatic video updates from Ukrainian President Volodymyr Zelensky, who declined an offer by the United States to be evacuated so that he could stay with his people and fight, have inspired people across the world.

It was that decision by Zelensky, and the surprising effectiveness of Ukrainian defenses, on which so much has hinged. The Ukrainians’ genuine heroism has meant that Vladimir Putin’s initial plans for a swift victory seem to have decisively failed. As the military historian Edward Luttwak described it, “The once patient hunter turned reckless gambler persuaded himself…that Zelensky would promptly flee, that his government would then collapse as ministers rushed off to escape arrest, that the Army, Navy, Air Force, and Air Defense, long starved of funds in any case would dissolve, so that Russian forces would advance unopposed to quickly seize every city, with Kyiv’s population obediently awaiting Russian rule.” That, clearly, didn’t happen, and Putin now faces a costly, prolonged struggle in Europe’s second-largest country by land mass. The prospect of his being stymied or even defeated has led the United States and its European allies to punish Russia with a barrage of further sanctions.

One cannot with one breath say that Putin is an unstable megalomaniac, and with the next insist that he would never dare to start a nuclear war.
sharetweet

Perhaps the most significant new penalties were those levied against Russia’s central bank, which the Council on Foreign Relations called “unprecedented.” Their effects were immediate. The ruble plunged; the Russian stock market had to be closed. This could foment political unrest; it has already caused hardship. As Putin doubles down on his reckless gambit, and the Ukrainian resistance continues to rally world opinion to their side, the anti-Putin coalition has grown more united. Even Germany, heavily dependent on Russian energy, and Italy, usually keen to keep their sale of luxury goods to rich Russians flowing, have gotten on board.

But Ukraine’s resolve and the collective response of NATO countries presents its own dilemma: How to maintain pressure on Putin and support for Ukraine while making sure the conflict does not escalate into something far more serious? How to keep Putin from using Russia’s nuclear weapons, as he has already threatened to do? We have already seen some of what Putin is willing to do when he feels thwarted or cornered: he’s now laying waste to cities, bombing schools and hospitals, and he has put Russia’s nuclear forces on alert. In such an atmosphere, loose talk of enforcing no-fly zones or activating NATO forces is reckless. Such moves would draw the United States and other NATO countries directly into a conflict that could extend into other parts of Europe, and perhaps beyond.

One cannot with one breath say that Putin is an unstable megalomaniac, and with the next insist that he would never dare to start a nuclear war. There is no telling what a desperate Putin—his regime increasingly unpopular at home and his war next door developing into a quagmire—is capable of. The various causes of this war, both long- and short-term—NATO’s expansion into Eastern Europe; the avarice of those who propped up Putin’s regime for profit; Putin’s own imperial ambitions, or his mad resentment against the West—will be debated in the months and years to come. Right now the priority should be to keep this conflict from becoming a world war. The United States and its partners must continue to view Putin’s crimes with moral clarity while also emphasizing prudence and diplomacy in responding to them. As difficult as it may be to accept, this means offering Putin off-ramps before he drives his country and the rest of Europe into a war no one can win. The imperative now is not to humiliate him but to stop him. The Russian leader is said to have no “Plan B” should the invasion fail, but that doesn’t excuse the rest of the world from devising a solution for peace. The options may all be unattractive. No one with a conscience is likely to be satisfied, because any solution will inevitably involve concessions on both sides of a conflict for which only one side is responsible. Anything that allows Putin to save face at home will seem unjust after the atrocities he has committed. Nevertheless, if there is an opportunity for de-escalation, we should seize it. If Putin is mad, there may be little the United States can do, but if he is merely cruel and vain, we should make use of his vanity to stop his cruelty—before it is too late, for Russia and Ukraine, or for the rest of us. 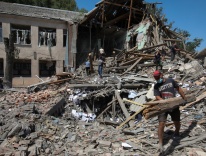