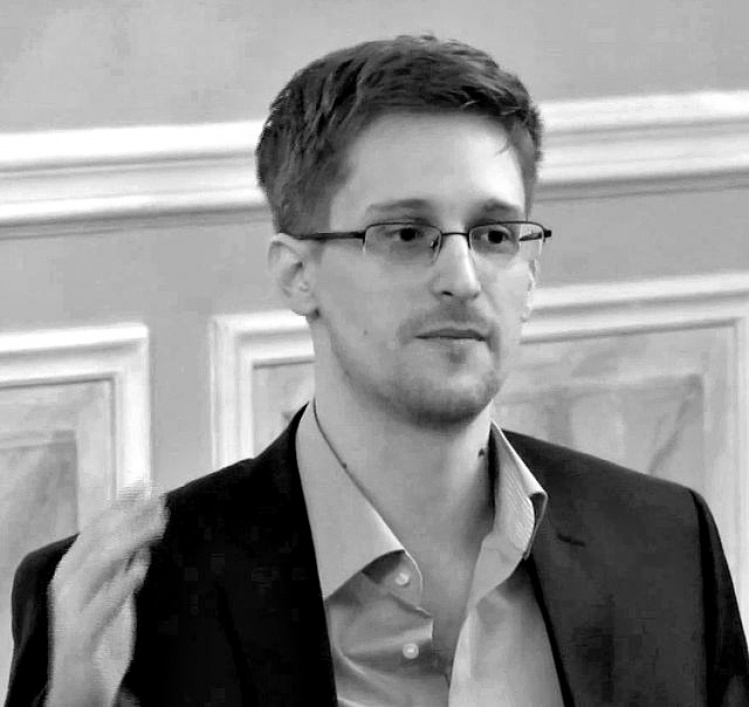 Citizenfour is the new documentary about Edward Snowden, who in 2013 disclosed the existence of a secret NSA mass surveillance program. In its subject and production it looks and feels a bit like those conspiracy movies from the 1970s—Three Days of the Condor, Marathon Man, or All the President’s Men. There’s the unwitting protagonist, the chance at heroism not sought but thrust upon him; the outsized, amorphous antagonist, the extent of its reach and capacity for treachery heretofore unimaginable; and the paranoia informing and infusing the story, heightened by ominous music and weirdly ominous shots of ordinary buildings, streets, and rooms. I say “a bit,” because Citizenfour is a documentary and not a dramatization—but also because that even as a documentary, it seems second-hand and overdone in comparison to fictional treatments.

How can that be? Shouldn’t access to the figure at the center of the story make for riveting work? In fact, the issue might be Snowden himself, whose presence dominates the long middle section of the movie, filmed over eight days in the Hong Kong hotel room he absconded to. The fear accompanying the growing awareness of what their characters have stumbled into—and the growing danger it puts them in—seems less manufactured in the acting of Robert Redford and Dustin Hoffman than in the actual speech and behavior of Snowden, hiding out from U.S. authorities. True, the key revelations and developments aren’t coming in the “real time” of the narrative, but it’s precisely that Snowden’s actions were undertaken prior to this moment that the tension should be higher. It’s understood he’s in danger, so when and how it will it arrive? He professes to feel anxiety, and he exhibits the classic tendencies of the paranoiac—convinced that he’s being watched because, of course, everyone is after him. But he’s also aware of being watched being watched: It’s a virtual performance in the role he may have been destined to play.

That he probably had a hand in making it so is the contention of Snowden critics who see him as something far less than a hero. According to this narrative, Snowden sought and took a position as an NSA contractor for the sole purpose of “creating his preferred policy outcomes, outcomes that usually involve a weaker state”—not for alerting fellow citizens to the secret transgressions of their government. What started with opposition to America’s drone-strike policy ended with a data dump on surveillance of electronic communications, which, given that it included as well information about legitimate enemies abroad, has been called by some a traitorous act.

Director Laura Poitras works unapologetically to cast Snowden’s actions in a noble light—Slate’s Fred Kaplan accuses her of “[flipping] from journalist to collaborator in this story long ago”--yet Snowden himself helps undermine her efforts, absorbed as he is in declaiming on what he’s done. We see him up close (very up close) with his fashionable fringe of beard and unruly hair, occasionally reclining on the bed as he holds forth on democratic principles and computer security. (I had not previously heard Snowden speak at length; his confident, tech-flecked discourse, trimmed with a mix of poised corporatese and light government jargon, reminded me of the information technology marketing executives I used to interview.) To drive home just how very much in danger he is, along with Poitras and journalist Glenn Greenwald—eagerly along to get the scoop of a lifetime—Snowden is shown going literally under the covers as he types an email to someone, and growing suspicious as a hotel fire alarm test is conducted in the background. When he learns the street outside the house he shares with his girlfriend back home is filled with construction vehicles, he seems almost excited at the possibility that they’re there to spy, through her, on him.

Paranoia—or narcissism, of which Snowden has also been accused? “I want you to put a target on my back,” he is quoted as saying, when he reaches out to Poitras to share his story (Poitras had made two previous documentaries about the government’s surveillance programs). “Nail me to the cross.” Poitras seems a willing enabler, keeping the camera lingering on Snowden as at the mirror he tries to tame his hair, as he shrugs into a flattering dress shirt just prior to arranging his passage out of Hong Kong, as he tests an umbrella he’ll presumably use to hide himself from hidden cameras. Poitras isn’t alone in apparent adoration: In conducting their recent interview with Snowden, questioners from The Nation gush, “You remind us a bit of the great Soviet-era dissident, Andrei Sakharov… and Robert Oppenheimer.” Snowden doesn’t protest, though he does have his own question: “Aren’t you familiar with Cincinnatus? That’s the first alias I used.”

Citizenfour grew out of a project Poitras was already working on about the extent of government surveillance and data collection, and there is a lot of other footage besides the Snowden material: of Greenwald, at one point speaking fluent Portuguese; of NSA whistle-blower William Binney; of privacy activist Jacob Applebaum; of WikiLeaks founder Julian Assange. The result is that the film feels unfocused, and even its nominal climax—Greenwald and Snowden scribbling panicky notes to each other about, it would seem, some new example of government treachery, just like Hofmann and Redford in All the President’s Men—fizzles, since we’re never shown what they’re getting so worked up about. The movie should make us feel as stunned and frightened and angry as Snowden says he is, since there is a huge and important story to tell. But Snowden generally comes across as ready more for his next close-up, with Poitras only too eager to oblige. It may seem at odds with their personae as champions of privacy, but maybe it’s that impulse to go public with so much about ourselves, abetted by easy access to the technologies enabling it, that helped get us here in the first place.

The editors on same-sex marriage