The Notre-Dame Fire Is Not the End
By E. J. Dionne Jr.
Spirituality
Secularism and Modernity
U.S. Catholicism
Columnists 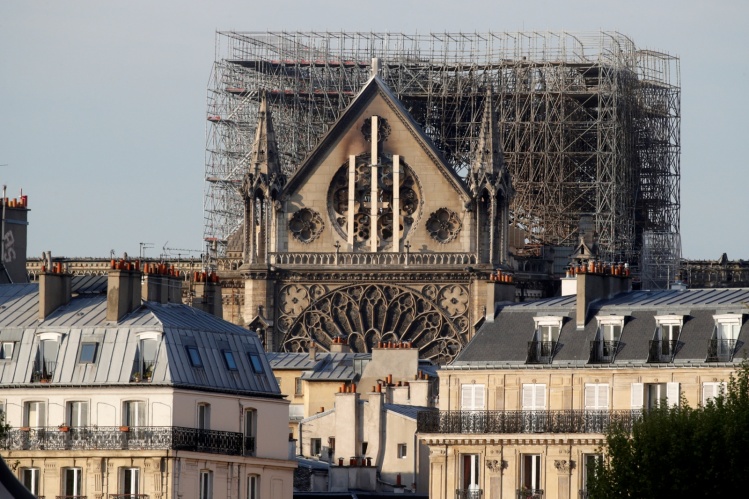 The burning of Notre-Dame Cathedral, a monument to human creativity and divine inspiration, invites first a mournful silence and then a search for meaning. This often involves efforts to understand the inexplicable by reference to metaphor.

That this ancient place of worship burned during Holy Week invites, perhaps paradoxically, hope. A time when Christians remember suffering and death and then celebrate resurrection speaks to the yearning for deliverance and renewal. Because Notre-Dame was not completely destroyed by this tragedy—or by centuries of neglect, or by political threats—it can be reborn.

And the possibility of revival instructs us about tradition and its endurance. We are learning from experts in restoration and repair that a reconstructed building is never the same as it was before. We are also learning that when structures are hundreds of years old, they are not the product of a single time or a single culture. They are the creations of many tastes, many insights and many minds.

Traditions are built that way, too. They survive because those who honor them work mightily to protect them—but also because living traditions never fear adapting when change demands it.

I still want to place my bet with those who insist the church can be delivered.
sharetweet

In a stirring piece of journalism, The Financial Times’ Edwin Heathcote reminds us that great structures come to be hallowed for more than their magnificence. We appreciate them as well because they have embedded themselves in the lives of individuals and communities. He notes that architecture is often “revered as an art object or an artefact rather than a working component of everyday life.”

And he asks of Notre-Dame: “But how much of that fabric is actually medieval? Cathedrals took centuries to build and they are always works in progress, accretions of layers from across the ages. The urgent questions then are: where do you start and what, exactly, do you rebuild?”

Which invites the other, more disturbing metaphor that has been invoked often in recent days: Notre-Dame burned at a time when the Roman Catholic Church, to which it owes its life, is also burning in a different way.

Perhaps this is too easy a leap to make, but who can question that there is a deep crisis in the church, brought about by the failure of its leadership to protect its most vulnerable members? Who can miss the debilitating divisions in the church, reflected most recently by Pope Emeritus Benedict’s letter that was widely interpreted (I think accurately) as a challenge to Pope Francis’ worldview and his handling of the crisis?

Notre-Dame’s near destruction brought home why this crisis has, of late, left me close to silent. As a struggling, run-of-the-mill believer who is neither particularly holy nor doctrinally pure, I have—like many Catholics, I suspect—found it impossible to break with an institution that has been profoundly, at times wickedly, flawed yet still kindles acts of mercy, moments of transcendence and works of beauty.

From my first visit to Notre-Dame just before Christmas in 1973 and continuing through many others, I always found the cathedral at once wondrous and welcoming. It was a blend of the sacred and the profane as bustling tourists made their way by pews where the devout and the doubting offered their prayers to a God they hoped was listening.

When I was there, I was always aware of French Catholicism’s morally bifurcated history. It was a force for both shameful collaboration with the Nazis and the Vichy regime during World War II, and also heroic resistance. So we should not be shocked by this very human institution’s more recent failures. There have been lies told to cover up corruption, but truths preached in the name of love and justice.

At times, I think that those who are leaving the church—the outraged parents, the women and LGBTQ people who feel excluded from its concern—may simply have more courage than I do. Yet I still want to place my bet with those who insist the church can be delivered, who remember, as with Notre-Dame, that it is a work in progress about which we always have to ask, “What, exactly, do you rebuild?”

No matter how skeptical I get, I find myself joyful at Easter Mass, year after year, when we first hear the words, “He is risen, Alleluia!” It will take time and care, but I know Notre-Dame will have its Alleluia moment. I pray there will also be one for the church that inspired its creation.

Budget Wars: A Case for Hope