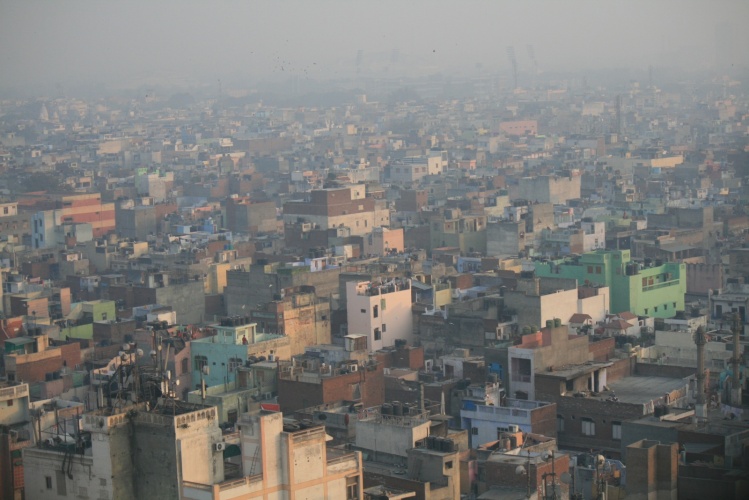 I travel to Delhi often and one trip blurs into the other. But this past winter was unusual. All through November and December, friends at home would ask me if I really had to go. Once I’d get there, I was warned to stay indoors, especially in the morning. That’s when pollution levels are at their highest.

According to the World Health Organization’s air-quality guidelines, air is safe to breathe as long as there are no more than twenty-five micrograms of particulate matter per cubic meter of air over a twenty-four-hour period. India’s own air-quality index (AQI) bumps that number up to sixty, but even that level was far exceeded last winter. Delhi choked and gasped air with an average 640 micrograms of particulate matter per cubic meter—and in some parts of the city, it was as high as 860. Delhi’s smog crisis was news around the world. Schools and offices were closed for weeks; traffic restrictions were imposed; American Airlines canceled flights. There was a great deal of talk in the Indian Parliament and in the media about the changes that needed to be made.

And then the winter ended, the smog lifted, and normal life resumed. Last week, however, it all came up again. Yale University released its Environmental Performance Index. India had plummeted thirty-six positions—to number 177 out of the 180 countries rated. Air quality was identified as one of the country’s primary environmental problems, but waste management, water pollution, and the steady erosion of soil and forest cover were also mentioned.

Rachel Carson’s Silent Spring marked the beginning of a growing awareness that all living things are interconnected. Most of India still lacks such awareness, and with far more people in far less space, the damage being done to the country’s land, oceans, rivers, and air is staggering.
sharetweet

The causes of India’s pollution are well known: the population is vast, and everyone wants a higher standard of living. When I first moved to India in 1981, there were only three car manufacturers in the entire country—combined, they produced barely thirty-two thousand vehicles per year. Almost no one I knew had a car. Now India is the largest producer of motor vehicles in the world (including cars, trucks, buses, two- and three-wheelers, and tractors). Last year alone, the country put 2.3 million cars on the road. While many of the vehicles it produces are exported, millions more Indians now own cars; many affluent families have three or four.

Thermal power plants are another major polluter, with antiquated machinery and poor maintenance making things worse. India also has a huge agricultural sector, and to spare themselves strenuous manual labor many farmers simply burn their fields at the end of one crop season to prepare them for the next. This is most common in the North Indian states of Punjab and Haryana, where geography exacerbates the effect of this practice. The mass migration of farmers from Pakistan into India at the time of Partition (the largest migration in recorded history) ended with the government felling enormous tracts of forested land in the Terai region of the Himalayas to create new farmland for the refugees. Those forests once acted to absorb the pollution of the plains. Now, with the trees gone and the region boxed in by the towering Himalayan Range in the north and the lower Vindhya Range to the south, all that smoke from burning fields, busy highways, and outdated thermal power plants has nowhere to go in the winter. According to the World Health Organization, six of the world’s ten most polluted cities are in India, and it’s no coincidence that they are all in the northern part of the country.

India is where the United States was in the 1950s. During that period, there was scant environmental awareness; there were no emission laws, and littering was considered normal. Our highways were like giant garbage dumps. Rachel Carson’s Silent Spring marked the beginning of a growing awareness that all living things are interconnected. Most of India still lacks such awareness, and with far more people in far less space, the damage being done to the country’s land, oceans, rivers, and air is staggering.

But the United States isn’t helping. The environmental record of the George W. Bush administration was appalling, especially its campaign to distort and even censor scientific evidence of climate change. Barack Obama made environmental protection a priority; he committed the United States to the Paris Climate Accord and cracked down on emissions from coal-burning power plants. But he also undermined his own legacy by “financing $34 billion worth of low-interest loans and guarantees to companies and foreign governments to build, expand, and promote fossil-fuel projects abroad,” according to an in-depth report in the Guardian. Two of those projects are in India and one of them involves one of the largest coal-burning power plants in the world.

Such hypocrisy is emblematic of the real problem India and other developing countries confront. India’s citizens produce an average of one and a half tons of greenhouse gases per person every year; their American counterparts produce almost sixteen tons. The poor are not the problem. The problem is uncontrolled industrial development.

Given the development model India has chosen to pursue, its economic growth will depend on rising emissions. The only alternative is a Gandhian version of development based on simplicity, self-reliance, and thrift. I don’t think any of us expect that to happen.