Changes in the Neighborhood

‘Eighth Grade’ and ‘Won’t You Be My Neighbor?’
By Rand Richards Cooper
Movies 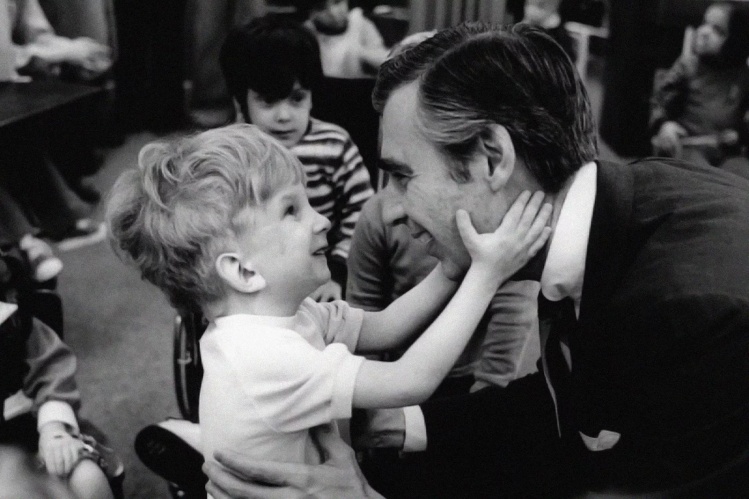 Two recent films speak to the abiding needs, and the evolving predicaments, of children.

Eighth Grade is notable for its pitch-perfect take on early adolescent angst: the all-absorbing self-consciousness; the aching sense of exclusion; the sudden fixation on, and endless curation of, one’s “look.” From the parental point of view, middle school is when every bit of playful, joyous curiosity that your child has shown up until now gets vacuumed away, leaving a nervous, distracted, and sporadically surly stranger.

And from the thirteen-year-old’s point of view? That’s where writer-director Bo Burnham and his star, Elsie Fisher, achieve a bit of forlorn magic. Fisher plays Kayla, a shy and ungainly eighth grader, the only child of a single dad (Josh Hamilton). It was smart of Burnham to choose as protagonist not someone who is bullied, but merely ignored; anonymity, rather than indignity, is Kayla’s fate. Her reticence crashes against the self-salesmanship recommended by her father, who urges her to “put yourself out there”—advice Kayla poignantly tries to follow, filling her notebook with lists of how to make friends and be assertive. But no amount of assertiveness training can change the fact that she‘s uncool, and wants it all too badly.

Burnham’s investigation of Kayla’s unhappiness places the protocols of digital culture and social media front and center. She lives on her device, and Eighth Grade captures the fragmented, ADHD-like rhythm of life in the digital age, even as it cues up a paradox: How to put yourself out there when real life is in here, in the enclosed and jittery realm of the web? That is where Kayla wants to be loved—or at least Liked. But while the teen makeup guru whose YouTube vlogs Kayla watches has 2 million views, her own earnest, stumbling attempts at advice videos—collected in a site she calls “Kayla’s Corner”—garner none. The excruciating paradox is that Kayla is desperate for someone, anyone, to listen to her online (the “you” whom she so hopefully addresses in her videos), while deflecting any and all attempts by her real-life father to talk with her. “I just want to be on my phone right now, OK?” she says, unplugging one earbud to brusquely ward off his conversational entreaties.

Burnham explores how the obsession with online life intensifies Kayla’s despair, as popular classmates frolic amid a never-ending churn of messaging, parties, and fun—and she can do nothing but watch, a social-media spectatorship that ramps up envy. To try to counter that envy, she formulates life lessons that she herself can’t follow. “The topic of today’s video is being yourself,” she asserts in Kayla’s Corner. “Don’t care about what other people think about you!” Not care? A sequence in which Kayla attends the pool party of a popular rich girl (whose mother forces her to extend an invitation) is a small tour de force, as we follow slump-shouldered, chubby Kayla, awkward in an ill-fitting lime-green bathing suit, through an afternoon of casual rejections.

Eighth Grade has its flaws. In depicting Kayla’s vulnerability, Burnham loads the dice, saddling her with a father who is laughably inept at advising her, and a social isolation so total that she seems never to have had a friend, ever. The film’s coming-of-age happy ending seems like a patch job. Nothing in it compares, for instance, with the movement at the end of last year’s Lady Bird, marking an authentic passage toward adulthood—or with that film’s nuanced evocation of family life.

In contrast, Eighth Grade feels like pretty thin stuff. But the thinness of the social texture Burnham surrounds Kayla with may be less realistic than diagnostic. Eighth Grade lays bare the glaring insufficiency of life lived trapped within the digital realm. It’s useful to place Burnham’s film in the company of The Breakfast Club, Sixteen Candles, The Outsiders, and other teen films of the 1980s. Those movies put their young cohorts through all sorts of age-related tribulations. But those kids were, first and foremost, cohorts, and in comparison with their group solidarity and shared hijinks, today’s tween-teen experience seems mighty lonely.

Rogers, who died in 2003, surely would have been dismayed by where we are now: the depth and rancor of our political divisions; the nastiness of online trollery; the bruising carelessness, isolation, and speed of life as we too often live it.
sharetweet

Those needing reassurance can turn to Won’t You Be My Neighbor?, whose genial hero, Fred Rogers, set out a half century ago to make reassurance his stock in trade. An ordained minister, Rogers fell in love with the still relatively new medium of television and used it as his church, conducting a decades-long sermon for generations of children who formed his congregation. As those many millions recall, each episode of his long-running show, Mister Rogers’ Neighborhood, began with the beaming host opening the door and entering to hang up his coat, don a sweater, and sing: “It’s a beautiful day in the neighborhood, a beautiful day for a neighbor—would you be mine?” For thirty-five years Rogers welcomed kids into the Neighborhood of Make-Believe, where he used puppets to present a range of alter egos, and invited human visitors to share gentle conversation and life lessons.

Morgan Neville’s documentary is not exactly biographical; we learn next to nothing about Fred Rogers’s early life, except for a series of animations, using a Daniel Tiger-like protagonist, that explore generic, even mythic, modes of childhood—imagination, vulnerability, illness, dread, joy, and the persistent need to be loved. Won’t You Be My Neighbor? is really about how Rogers conceived the show that made his career; the film opens with black-and-white footage of him sitting at a piano in 1967, musing aloud about his plan “to help children through some of the difficult modulations of life”—like going, he explains with a quick twirl on the ivories, “from an F to an F sharp.”

A central mystery is the question of who Fred Rogers “really” was. If you stripped away the milquetoast persona so frequently lampooned by comics, what would you find? Neville strongly suggests that the mild, kind, childlike, and endlessly patient presence on the set was, in fact, the man himself. Neville includes footage from Rogers’s 1969 testimony before a Senate panel tasked with funding public television, chaired by the gruff Rhode Island senator, John Pastore. With unalloyed sincerity, Rogers explains his mission to “give an expression of care to each child”—then recites the lyrics to a song from his show, “What Do You Do with the Mad That You Feel?” We watch as Pastore gapes, then visibly softens. “I think it’s wonderful,” he says.

Rogers’s show was part of the emergence of PBS, and though he was a lifelong Republican, it isn’t hard to see his outlook as the prototypical liberal one: concern about the environment; opposition to the war in Vietnam; emphasis on racial harmony and justice; worry about a popular culture rife with casual violence; faith in the importance of childhood self-esteem. But beneath this pro forma set of stances resided something far more visionary: his abiding belief in the dire necessity, and the transformative power, of love. Neville is at pains to reveal the Christian radical hiding behind the nerdy milquetoast.

This radicalism evinced itself with quiet force. In the cast of Rogers’s show was a neighborhood policeman played by François Clemmons. Clemmons was black, and in one sequence Neville shows us searing footage of race hatred at integrated public swimming pools in the 1960s—then cuts to the show, where Rogers invites Clemmons to join him in dipping his feet into a plastic wading pool. Couched simply as an offer of relief on a hot day, the scene reveals Rogers extending a coded political message without abandoning, even for a moment, his pose of childlike innocence.

The moment sums up Rogers’s m.o. and suggests why, far from being simple, his show in fact was so subtly powerful. Clemmons was also a closeted gay man, and interviewed decades later, he tears up with gratitude, recalling how it became clear to him that Rogers’s message of acceptance extended to that level of his identity. Similarly moving is a scene in which Rogers welcomes onto the set a boy suffering grievous disability from a childhood spinal tumor and facing daunting surgery. As Rogers sits by the boy’s wheelchair, the two end up singing together, and we appreciate the courage flowing forth amply from both sides of the encounter. As with the moment when Rogers gently sloshes water on the other man’s feet, the act evokes something pastoral, even papal. In the end, we realize that what we are watching is a genius of love.

Neville uses clips of other 1960s kids’ TV shows, from Howdy Doody to Space Ghost, to peg the comic violence and antic slapstick that formed the norm from which Rogers chose to depart. “I saw people throwing pies at each other’s faces,” he recalls, “and I thought, ‘This is a wonderful tool. Why is it being used this way?’” How did he want to use it? To inculcate respect, to preach the dignity of all people, and to promote a model of emotional intelligence exercised through imagination and kindness. “Fred was radical,” comments David Newell, who played the delivery man, Mr. McFeely. Indeed.

Rogers, who died in 2003, surely would have been dismayed by where we are now: the depth and rancor of our political divisions; the nastiness of online trollery; the bruising carelessness, isolation, and speed of life as we too often live it. His show—steeped in gentleness, and radically slow—seems almost impossible to imagine today. And yet we need it more than ever.