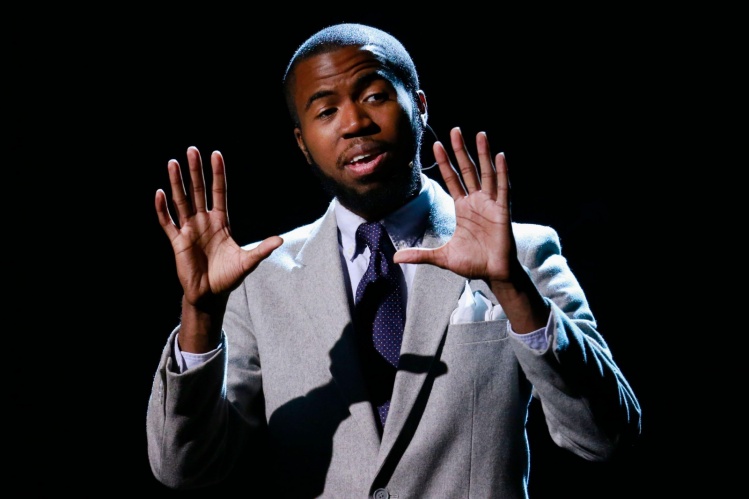 Odes are Janus-faced things. Keats praises that “light-winged Dryad of the trees,” the nightingale. But he also envies the bird (never mind that he says he doesn’t), wishing that he too could escape from the “weariness, the fever, and the fret” of human existence. In his “Intimations Ode,” Wordsworth rhapsodizes over childhood even while he bitterly regrets its passing. In odes, celebration dances with lamentation, the exultant song giving way to, and mixing with, the harrowing cry.

Joshua Bennett’s second poetry collection, Owed (Penguin Books, $20, 96 pp.), works all the notes on the odal scale. The title is a pun (odes point to those we owe fealty or love or respect to) and Bennett’s poems often pay homage: to Black writers like Langston Hughes and Zora Neale Hurston; to Black rappers like Juelz Santana; to Black athletes like LeBron James; to Black institutions like the barbershop. In Bennett’s telling, the barber, that “[p]ostmodern blackness black / -smith,” offers lessons in verbal invention: “Speak, / & entire phrases abandon / Standard American / Etymology; hence, you liberate / waves from the sea, cornrows / from the cornfield, reclaim fade / so I now hear the word & imagine / only abundance.”

A current of joy runs through Bennett’s book; it is as much praise-song as poetry. In “Owed to Pedagogy,” Bennett sings of his disciplinarian sister. She kept him studying inside during “the dead center of summer,” the two “poring over formulae: / divisors & dividends, quotient / the first synonym for resolution / I ever learned, & would later / come to love for its sound alone.” An early lesson in mathematics becomes a first lesson in poetics, in language’s music and pliancy. The word “quotient,” he writes, “reminded me, even then, / of words like quantum & quotation / mark, both ways of saying nothing / means what you think it means / all the time.” That line break after “nothing” displays Bennett’s excellent touch: what seems like saying nothing, linguistic emptiness, can in fact become a way of saying many things at once, linguistic plenitude.

Elsewhere, the speaker remembers his grandmother’s plastic-covered couch, “[w]hich could almost be said / to glisten, or glow, / like the weaponry / in heaven.” In an example of what Hurston calls the “will to adorn,” Bennett suggests that preserving beauty is a way of preserving life:

Ain’t no equal
& opposite reaction
to the everyday brawl
blackness in America is,
no body so beloved
it cannot be destroyed.
So we hold on to what
we cannot hold.
Adorn it
in Vaseline, or gold,
or polyurethane wrapping.
Call it ours
& don’t mean owned.
Call it just like new,
mean alive.

These are odes about who Bennett owes things to. But they’re also odes about how much Black Americans are owed and how that debt might be repaid. In “Mike Brown Is a Type of Christ,” Bennett “gaze[s] upon the boy / & all of our fallen return to us, their wounds unhealed / & howling.” Sonic echoes—all/fallen, unhealed/howling—hammer and hurt. Police violence continues; Black boys keep dying; and “who says the dead don’t think, don’t shake / the weight of marrow & slip, quiet as fire, back / into whatever partition binds this life / to its grand black Epilogue?” The first in a series of poems entitled “Reparation” recasts what freed slaves were once promised: “Forty acres & a jewel-encrusted orchid crown / for each & every living baby girl / growing up the way we did.” Not forty acres and a mule but forty acres and a jewel: true reparation requires not just necessity, but gratuity, beauty, adornment. Owed shows how much reparative work Black poets and communities continue to do, giving even when they should be receiving.

The act of artistic creation, which seems absolute in its solitude, often occurs at the point of contact between the imagination and other people.
sharetweet

Two recent books elegantly consider the flow of poetic knowledge: how poets arise from other poets; how the act of artistic creation, which seems absolute in its solitude, often occurs at the point of contact between the imagination and other people. In Studying with Miss Bishop: Memoirs From a Young Writer’s Life (Paul Dry Books, $16.95, 184 pp.), Dana Gioia offers “portraits of six people whose examples helped me become a writer.” In The Secret Gospel of Mark: A Poet’s Memoir (Seven Stories Press, $24.95, 416 pp.), Spencer Reece creates a “memoir-breviary” in which he considers how poets and poetry helped him to sobriety, self-acceptance, and ultimately the Episcopal priesthood. These books are odes to what two poets have owed, and still owe, others.

Gioia and Reece took circuitous routes to their poetic presents—Gioia was an executive at General Foods, while Reece worked for years at Brooks Brothers—and both are interested in how they got here. Gioia puts it well in his preface: “Style isn’t just a literary accomplishment; it’s a human one...I knew books and literature. That was the easy part. What I didn’t know was how to lead a writer’s life. I couldn’t learn that from books. I needed living examples, especially people I liked and admired.” One of Gioia’s living examples was Elizabeth Bishop. Gioia enrolled in Bishop’s “Studies in Modern Poetry” class while a graduate student at Harvard in 1975, and he sketches a portrait, both kind and precise, of the “politely formal, shy, and undramatic” poet. A nervous instructor, Bishop had a simple pedagogical principle: follow pleasure and the details that provide it. “Good poems existed for her in a sort of eternal present.... The order of the words in the poem was the only agenda, and we would go from word to word, from line to line, as if we had all the time in the world.” Another chapter describes a week spent with John Cheever: “Every gesture was so graceful that he scarcely seemed part of the clumsy everyday world. Even the way he sat still seemed as carefully composed as a portrait.” Gioia is Catholic and his sense of poetry is incarnational. As Bishop taught, poetry arises from the concrete. As this book shows, it also arises from community, from being in relation with others.

Growing up in Minnesota in the 1970s, Spencer Reece was a lonely child. His parents drank; he desired boys and hated himself for it; he concealed and withdrew. The Secret Gospel of Mark follows the general arc of a Bildungsroman: those difficult early years; Reece’s time as an undergrad at Wesleyan, drinking and repressing (and, more happily, studying with Annie Dillard); his work at Brooks Brothers; the publication of his first book of poetry in 2001; his surprising mid-life decision to become an Episcopal priest. This growth, fitful and imperfect, remains a mystery: “Mystery manifested and filled in more edges of everything I knew.” As his life turns and turns again, poetry is always there: Plath, Hopkins, Herbert, Strand, and others. In college, Reece reads and admires Bishop—also gay, also sad, also fastidious in self-concealment. “Because of my mother, I associated privacy with dignity,” he writes “Bishop’s poems supported this private way of living.” Later in life, Reece meets and exchanges letters with James Merrill: “Rich, eccentric, acerbic, flirty, childlike, Cary Grant-suave, worldly...Merrill came at me like an evangelist cloaked in nonchalance.”

Toward the end of The Secret Gospel of Mark, by which time Reece has been ordained and won prizes and worked through drafts of his poems with Louise Glück, he reflects on the mystery of transformation:

The term “little entrance” in the Greek Orthodox Church describes when the priest comes forward to read the Gospel—with such an entrance we spy some chink of eternity, words spoken break open the world. Many little entrances exist.

A poet reading his or her poems is a little entrance. The circles of AA and Al-Anon in church basements. Those meetings had little entrances. Someone opened their mouth and everything changed. Those little entrances led me back to the church.

By Reece’s accounting, he owes a great deal to poetry and to God. But that’s the thing about grace. You can reckon up what you owe; you can try and pay it back. But, despite everything, it keeps giving and giving.

This is part of a series in honor of National Poetry Month, in which Commonweal's literary critic Anthony Domestico offers weekly reflections on poets and new collections of poetry throughout April. You can find the first installment here, and the entire series here.