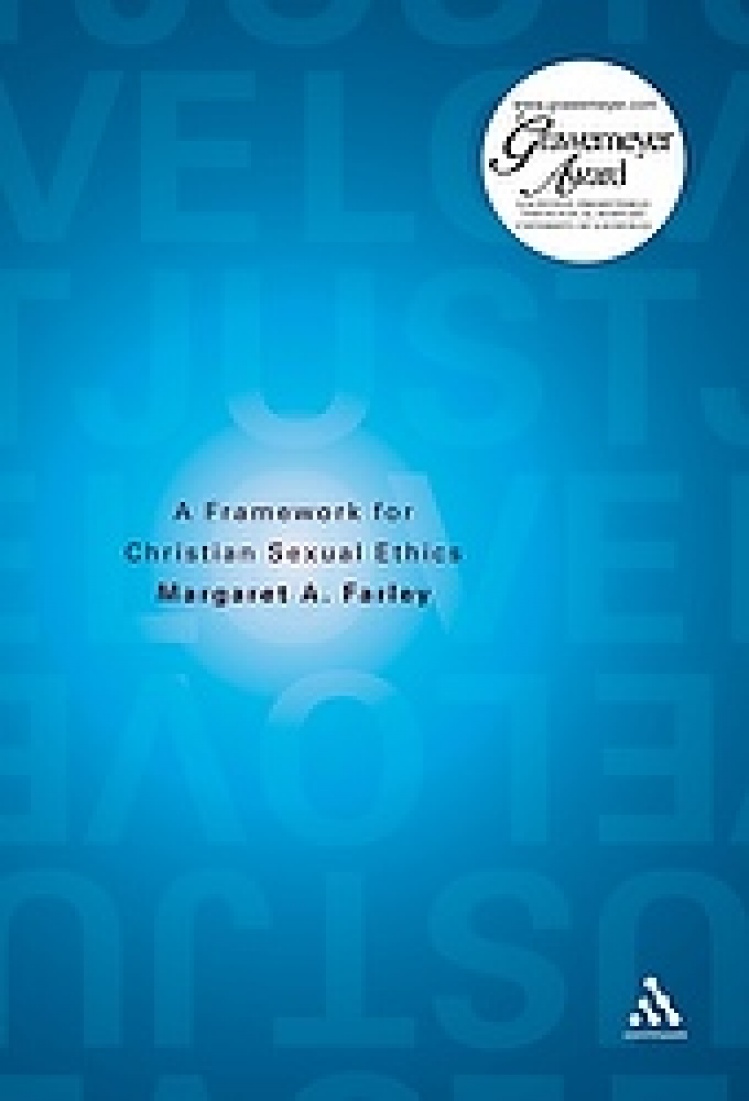 Today at Roman Noon the Congregation for the Doctrine of the Faith published a Notification about the book Just Love: A Framework for Christian Sexual Ethics (New York: Continuum, 2006) by Sr. Margaret A. Farley, R.S.M. (Read Luke Timothy Johnson's review of the book here.)

For those who dont already know about her, here are some highlights from the Yale Divinity School website: A Sister of Mercy, Farley was the first woman appointed to serve full-time on the YDS faculty and shared with Henri Nouwen the distinction of being the first Roman Catholic faculty member at the Divinity School. She is widely published and the recipient of the John Courtney Murray Award from the Catholic Theological Society of America. She has served as president of both the Catholic Theological Society of America and the Society of Christian Ethics. Respected not only as a scholar but as a teacher as well, she appeared on the cover of the Yale Alumni Magazine in 1986 in connection with a feature article on great teachers. She began teaching at Yale Divinity School in 1971 and earned her Ph.D. from the University in 1973. She retired as professor emerita in 2007.

The process toward the Notification began on March 29, 2010, with a preliminary evaluation indicating the doctrinal problems present in the text. According to the CDF, Sr. Farleys response of October 28, 2010 did not clarify these problems in a satisfactory manner. Then, following an evaluation by a Commission of experts, the CDF confirmed on June 8, 2011, that the book contains erroneous propositions, the dissemination of which risks grave harm to the faithful. On July 5, 2011, a letter was sent inviting Sr. Farley to correct the unacceptable theses in her book.

On October 3, 2011, the response of Sr. Farley was forwarded to the CDF, and this response, having been examined by the Commission of experts, was submitted to the Ordinary Session of the CDF for judgment on December 14, 2011. The resulting Notification results from that meeting.

In the end, the Notification concludes that the book is not in conformity with the teaching of the Church. Consequently it cannot be used as a valid expression of Catholic teaching, either in counseling and formation, or in ecumenical and interreligious dialogue.

In her response to todays Notification about the book, Sr. Farley does not dispute the judgment that some of the positions contained within it are not in accord with current official Catholic teaching. She explains that the book was not intended to be an expression of current official Catholic teaching, nor was it aimed specifically against this teaching. It is of a different genre altogether.

Growing out of my work as a Professor of Christian Ethics at Yale University Divinity School, she writes, this book was designed to help people, especially Christians but also others, to think through their questions about human sexuality. It suggests the importance of moving from what frequently functions as a taboo morality to a morality and sexual ethics based on the discernment of what counts as wise, truthful, and recognizably just loves. Although my responses to some particular sexual ethical questions do depart from some traditional Christian responses, I have tried to show that they nonetheless reflect a deep coherence with the central aims and insights of these theological and moral traditions. Whether through interpretation of biblical texts, or through an attempt to understand concrete reality (an approach at the heart of natural law), the fact that Christians (and others) have achieved new knowledge and deeper understanding of human embodiment and sexuality seems to require that we at least examine the possibility of development in sexual ethics. This is what my book, Just Love, is about.

At this initial moment, here are a few comments from my perspective as a scholar of the Bible and a historian of Christianity.

The Notification rejects the books recourse to contemporary experience. As a historian and biblical scholar, I find this puzzling. Christian theologians and ethicists have been drawing from contemporary experience from the time of Jesus onward. For example: In the first century, Jewish-Christians reflected on their experience of getting to know Gentiles -- in order to ultimately decide how to include them in Gods love and plan. Or consider how, in the 20th-century, Gentile-Christians reflected on their experience of relating with Jews -- and decided not to persecute them and even to elevate them in esteem (an insight later enshrined in the magisterial document, Nostra Aetate). These are examples of how Catholic thought -- including official teachings of the early Church and later of the hierarchical Magisterium -- has changed over time based on relationships of personal experience. If personal experience no longer constitutes part of an adequate basis for theology and ethics, why not? What is the argument? When did this change?

Who gets to say what?

Sr. Farley's book is quite clear to point out when her own opinion differs from magisterial teaching, and so it is hard to see why her book should be singled out. She makes careful use of the phrases my own view or my own position on matters of disagreement with official Catholic teaching. She's not the only prominent theologian to do so. Pope Benedict XVI -- writing under his scholarly name, Joseph Ratzinger -- has published two books on Jesus of Nazareth. In the introductory pages and throughout the text, he makes clear that he speaks in these pages as an individual scholar, searching for the truth as a man of fides quaerens intellectum. By his favorable quotations of the non-canonical Gospel of Thomas or his questioning of the historical veracity of Matthew's Passion Narrative, will faithful Christians be led astray?

If even the Pope -- whose every word and move is watched globally -- is permitted to step out of his office and write as a spiritual seeker and theologian, what about a woman religious with a Ph.D. and forty years' experience in the classroom? The Pope draws from contemporary philosophical currents (historical criticism derived from an Enlightenment consciousness) and contemporary experience (of anti-Semitism and its horrific effects) in the course of his presentation of Jesus. Just as with the Pope's books on Jesus, attentive readers of Sr. Farley's book on ethics know that she clearly states when she is speaking her own opinion about the principles of just relationships. Its hard to imagine how Catholic readers would be in danger of mistaking her assessments for those of the Catechism. And after over forty years as a professor at a prominent seminary, Sr. Farley knows that she is not giving the faithful questions that they don't already have. The faithful know what the Catechism says, and if we don't, it's easy to find out.

But the faithful also have close, personal experiences with faithful Christians who, for example: divorced a spouse because the relationship was unjust and causing grave harm; lived in a relationship of vastly unequal power and wanted to end it but couldnt; or were raised from childhood to be men or women of stalwart faith and morality by their faithful parents, who happened to be of the same sex. Sr. Farley's book results from years of study and witness to the questions raised by men and women who tried to live their Christian lives with faithfulness and righteousness.

A roundup of responses from other academics can be found here. Farley's statement is here. And here's the statement from the president of her community, Sr. Pat McDermott.

Related: CTSA statement on St. Margaret Farley, by Grant Gallicho
Lisa Cahill on Margaret Farley and the CDF, by Michael Peppard
Cherchez la femme, by Mollie Wilson O'Reilly
What's Justice Got to Do with It? by Luke Timothy Johnson

Lisa Cahill on Margaret Farley and the CDF