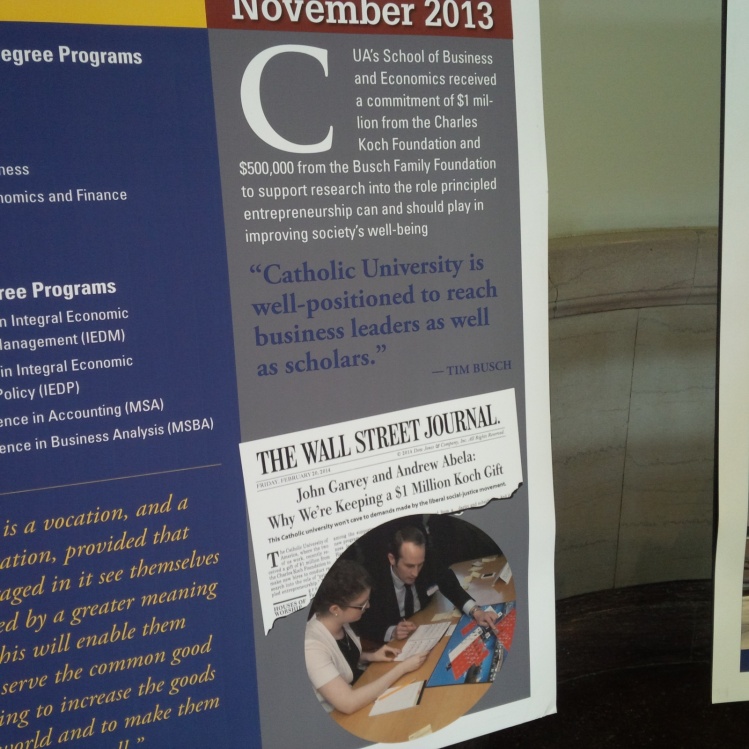 The problems at Catholic University’s business school run even deeper than I thought. Remember what is at stake: the business school has taken large sums of money from the unvirtuous Koch Brothers and other libertarian interests. The worry is that tainted money taints.

Now, CUA could try to deflect this criticism. They could argue that they need the money, and they will never waver in their commitment to traditional, orthodox, Catholic social teaching—the great legacy of people like John A. Ryan, whom Cardinal Turkson has been praising in recent speeches.

But CUA doesn’t take this approach. Quite the opposite, in fact. It actually attacks its critics and brags about these attacks. Look at the attached image. It is a photograph of a poster on public display at CUA’s business school. It boasts about taking large sums of money from the Kochs and the Busch Foundation. And it prominently displays an op-ed written by president John Garvey and then-dean (now provost) Andrew Abela for the Wall Street Journal, displaying the subtitle: “This Catholic university won’t cave to demands made by the liberal social justice movement.”

I am well aware that op-ed authors don’t often write their own titles and subtitles. But do Garvey and Abela seem remotely embarrassed by this title? Not in the slightest.

Of course, attacking “social justice” is par for the course for the Wall Street Journal editorial page. But for the president and provost of a pontifical university to use this line of attack is appalling. “Social justice” is central to Catholic social teaching, and its tenets are non-negotiable.

The op-ed itself has a defensive crouch to it. The only real issue of substance raised is the issue of public-sector unions. Garvey and Abela pull out the favored talking point that the Church has never spoken explicitly about unionization in the public sector. But neither has it said anything explicitly about unionization in any other sector! A natural right to association does not cease to be a natural right because the employer is public rather than private.

Beyond that, Garvey and Abela ignore all the ways the Kochs are actively undermining Catholic social teaching—such as by attacking the right to healthcare, fighting unionization, and (quite literally) poisoning the planet while perpetuating lies about climate change.

Let’s be absolutely clear: this is no compatibility whatsoever between this worldview and the worldview of Pope Francis—who, of course, is in full conformity with his predecessors. In fact, Laudato si’ offers a strong denunciation of the very ethos that seems to animate the Kochs—an ideology based on the “bondage of individualism” and a “magical conception of the market,” a short-term focus on self-interest and individual gratification, and willingness to degrade our common home and spread misinformation in pursuit of profit.

And in a speech in Bolivia this summer, Pope Francis had this to say: “Working for a just distribution of the fruits of the earth and human labor is not mere philanthropy. It is a moral obligation. For Christians, the responsibility is even greater: it is a commandment. It is about giving to the poor and to peoples what is theirs by right. The universal destination of goods is not a figure of speech found in the Church’s social teaching. It is a reality prior to private property.”

This is the very antithesis of the Kochs’ ideology. It is highly traditional Christian teaching. But would Garvey and Abela view these as demands coming from the “liberal social justice movement”?

CUA had a chance to side with Pope Francis over the libertarians. It did not. Instead it embraced the connection and attacked the critics. It used the money not to promote the kind of traditional teaching associated with alumni like Msgr. John A. Ryan and Msgr. George Higgins, but to hire libertarians and even climate-change deniers. There’s something very wrong with this.