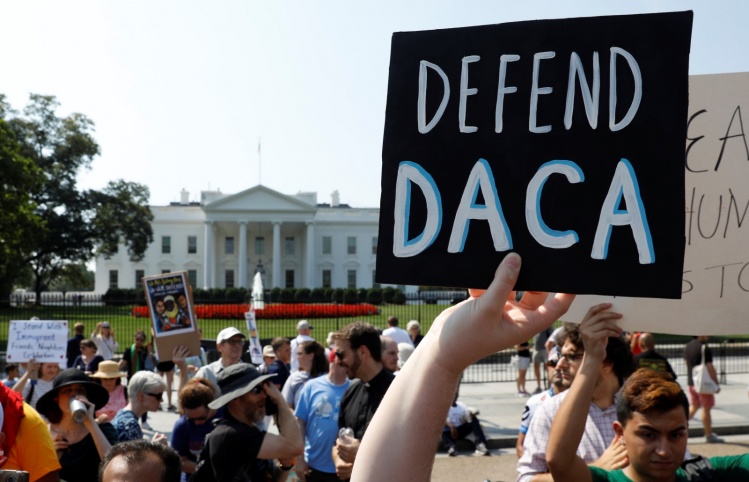 President Trump’s decision to end a program that protected nearly 800,000 young, undocumented immigrants brought to the United States as children from deportation ranks as perhaps the cruelest decision of his presidency. Trump has doubled down on the bitter politics of white backlash and ethnic nationalism at the expense of hopeful young people who represent the best of America. By pulling the plug on the Obama-era Deferred Action for Childhood Arrivals (DACA) program—giving a dysfunctional Congress just six months to clean up his mess—Trump ignored pleas not only from many Republican leaders, but also a number of the loyal evangelical advisors who stood by him even after his reprehensible reaction to the racial violence in Charlottesville.

While polls show that a majority of Americans across political parties think that those here under DACA should be allowed to stay in the United States, the president has again shown himself beholden to a base of voters who fear and loath immigrants as an existential threat. It’s worth remembering that many of Trump’s most loyal supporters didn’t vote for him in spite of his racist dog whistles: the xenophobia and "build-the-wall" promises of a fortress America were exactly what these voters wanted and now cheer.

Elections have consequences—in this case, dire ones. Trump is targeting selfless, hard-working, patriotic young men and women who love our country. A few days before yesterday’s announcement, to take a telling example, a young immigrant with DACA status died trying to rescue a victim of Hurricane Harvey.

Catholic leaders have consistently defended DACA holders, and the dignity of all immigrants. In February, the president promised to show them "great heart," but his decision yesterday, as Cardinal Blase Cupich of Chicago said in a statement, was "heartless." New Jersey Cardinal Joe Tobin described the move as "malicious," adding that the Trump administration "not only has closed borders; it also has closed minds and hearts." The U.S. Conference of Catholic Bishops called the decision "a heartbreaking moment in our history that shows the absence of mercy and goodwill, and a short-sighted vision for the future." In a pastoral letter, Fr. Timothy Kesicki, President of the Jesuit Conference of Canada and the United States, wrote: "You came to us for an education, you came for pastoral and spiritual guidance, and we welcomed you—not because of your nationality—but because you are our brothers and sisters in Christ. No government can tear that sacred bond." Fr. John Jenkins, president of the University of Notre Dame, likewise blasted Trump's move as "foolish, cruel, and un-American." And Catholic sisters also spoke out. The Leadership Conference of Women Religious denounced the president's "unconscionable action," stating that the decision "will cause irreparable harm to families and communities."

There are some things that angered Jesus, “and they should anger us as well”
sharetweet

Last week, Bishop Mark Seitz of El Paso joined more than 1,300 educators at Catholic schools to call on Trump’s chief of staff and former Homeland Security director John Kelly to save DACA. The bishop didn’t soft-peddle his demands, calling efforts to undermine protection for Dreamers "a politically motivated assault." There are some things that angered Jesus, "and they should anger us as well," the bishop said during a press briefing hosted by the organization I work for, Faith in Public Life. Bishop Seitz and Bishop Cantu of Las Cruces, New Mexico, also reacted to Trump’s decision yesterday in a joint statement that urged a moratorium on deportations, and called the DACA repeal a "betrayal of leadership."

House Speaker Paul Ryan, a Catholic, once again has the opportunity to show real leadership, a task he consistently has failed at during Trump’s first months in office. Now, Ryan will spearhead efforts to find an unlikely legislative clean-up to the chaos the Trump administration has callously caused. "At the heart of this issue are young people who came to this country through no fault of their own, and for many of them it’s the only country they know," Ryan said in a response. He expressed hope that Congress will "find consensus on a permanent legislative solution that includes ensuring that those who have done nothing wrong can still contribute as a valued part of this great country."

The president talks a lot about American greatness, but a great country doesn’t institutionalize cruelty as policy. Ryan and Congress now have a chance to do what’s right. Hundreds of thousands of young lives are depending on it.