Cardinal George to Chicago Catholics: 'You are my legacy.' 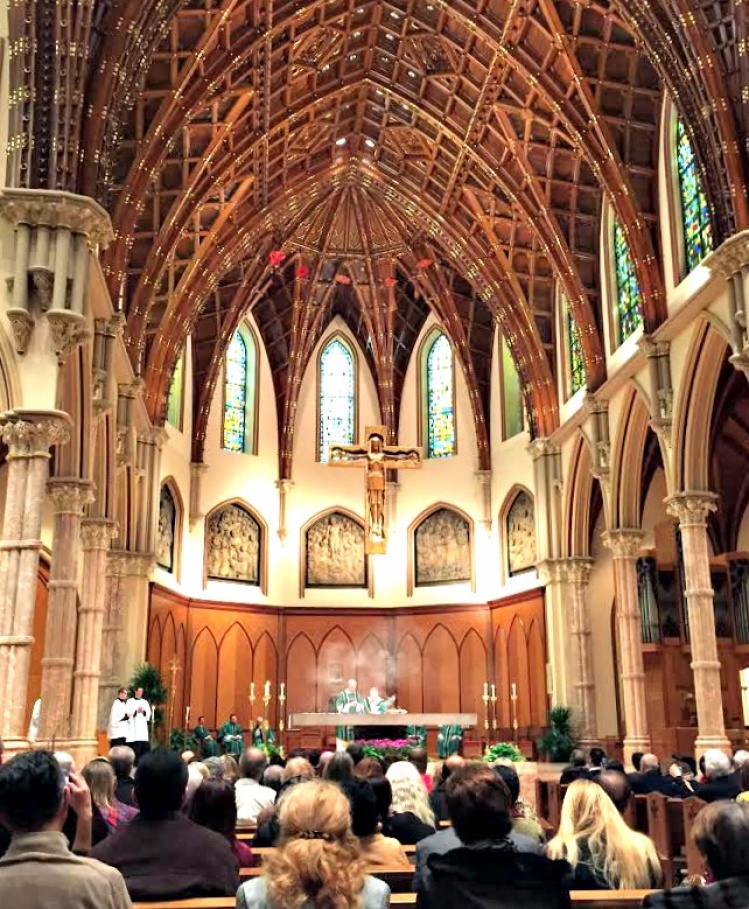 CHICAGO -- The congregation gathered early at Holy Name Cathedral this morning. A half-hour before Cardinal Francis George would begin his final Mass as archbishop before Blase Cupich succeeds him this week, the narthex was nearly full. The people waited for 9:30 Mass-goers to vacate. Msgr. Dan Mayall, pastor of the cathedral (an associate pastor of my childhood parish twenty-odd years ago), greeted arriving parishioners as they came in from the snow, and departing ones as they returned to it.

A bank of cameras on the north side of the transept turned in toward the pews to watch them fill with a very Chicago crowd: Catholics of every ethnicity, some dressed up, others down, some draped in furs and others in NFL jerseys (the Bears were playing at home), suits and jeans, some with toddlers in tow, others carrying babies, or pushing grandparents, some single, others not, some fingered rosary beads, others scanned the expansive wooden ceiling with their smartphones for the perfect Instagram shot. Cameramen moved toward the center aisle, just before the break in the pews. One leaned down to let a couple know that he wouldn't be obstructing their view for the whole liturgy. "Why are all these video cameras here?" the husband asked. The cameraman explained: the cardinal's last Mass. From within his coat pocket the husband produced a camera of his own.

An usher approached as the procession was about to start. "No one in the aisle," he warned the journalists. Besides, "the cardinal doesn't always do the procession." This time he did.

As Cardinal George labored up the aisle on crutches, weak from cancer treatment, he smiled at parishioners who beamed back. Some fought tears. Others failed. He took the ramp on the left side of the sanctuary, moved slowly past the altar, flanked by acolytes who helped him up the steps to the cathedra, the seat of the archbishop.

The cardinal delivered the homily while sitting. He preached on the gospel reading, the Parable of the Talents, in which the master--or, as George referred to him, the king--gives three servants differing amounts of money before he leaves them. After a long absence, he asks the servants for an account of their investments. Two of them chose wisely and doubled the money. But the third, afraid of failing and angering his master, buried his talent. He is rebuked by the master as a "wicked, lazy servant."

The question posed by this reading, George explained, is quite simple: "Can God trust us?" God has given us great gifts, the cardinal continued. Will we be hard-working or lazy? Will we allow fear to destroy love? "At some point, he will ask us what have we done with these gifts.... What will you tell God when he asks what you have done with his gifts?"

A version of that question has been asked of him often as he approaches the end of his seventeen-year tenure as archbishop of Chicago, George said. What will be your legacy? "Every priest and bishop is given the gift of people he is called to care for and to love in Christ's name." The cardinal continued: "At some point Christ will question me: What have you done with my people? Are they holier because of your ministry? Are they more generous, more loving toward one another? In short, you are my legacy."

"There are a lot of holy people in Cook and Lake Counties," the cardinal concluded. "I thank God for all of you--for your cooperation in the mission of the church, for your generosity toward others, especially the poor.... You are my legacy."

Before the final blessing, Msgr. Mayall thanked the cardinal for allowing him to serve as pastor of Holy Name Cathedral over the past thirteen years. As a token of appreciation, members of the pastoral council presented the cardinal with a book of well wishes from parishioners. He stood to receive the gift, smiled broadly, and offered his own words of thanks to Mayall, to the priests, staff, lay ministers, and to the whole congregation. "I know that Archbishop Cupich will be very pleased by what he sees here," George said. "Know that I will be pleased all the days of my life. You are my legacy. And I thank you from the bottom of my heart."

The congregation responded with a standing ovation. Cardinal George delivered the final blessing, his final blessing as archbishop of Chicago. As the choir sang "Now Thank We All Our God," the cardinal made his way back down the aisle past more applause and smiles and tears to a swell of reporters awaiting him at the narthex. The congregation shuffled out, parted by the wall of cameras. Some commented on the beauty of the liturgy, others on the brevity of the homily. Where should we brunch? Where did you park? Will you watch the Bears? A baby cried out, then interrupted herself with laughter.