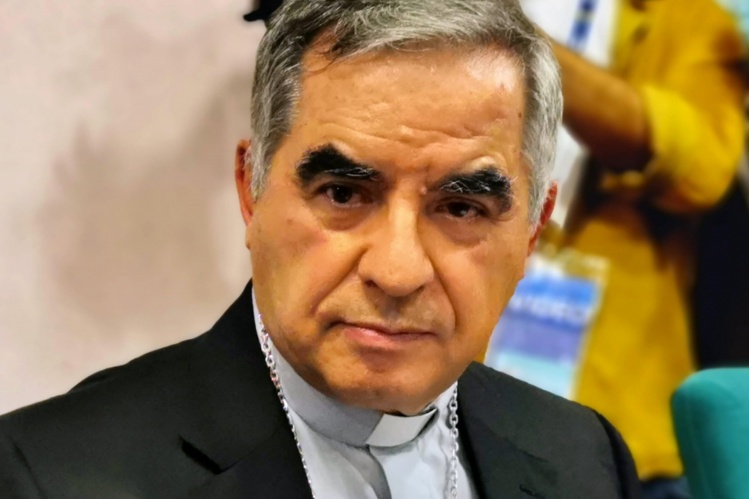 Only once in modern history has a cardinal entered the room for an audience with the pope and left without his red hat. It happened in September 1927, when Pope Pius XI relieved Louis Billot of his position for criticizing the pope’s condemnation of Action Française. On September 24 of this year, Pope Francis delivered another first, demoting a cardinal prefect of a curial congregation, Giovanni Angelo Becciu.

The news came in a highly unusual evening announcement from the Holy See Press Office, stating that Francis had accepted the “resignation” of Becciu “from the Congregation for the Causes of the Saints and from the rights of the cardinalate.” The timing was tied to the forthcoming visit by inspectors from the European Council’s anti-money-laundering watchdog, and to the looming publication of an investigative report on Vatican finances by the Italian weekly L’Espresso. Becciu is suspected to have given financial favors to family and friends, and though he is not yet under formal investigation, Francis appointed a special prosecutor on September 28 to look into matters. The day after his firing, Becciu called a press conference to defend himself, as well as hinting that, given the factional wars that typify the Curia, the news could somehow be turned against Francis as well.

Though the wording of the announcement of Becciu’s firing seems plain, it’s not quite clear what it means in terms of his standing. If Becciu remains cardinal, he still has the rights and duties of all cardinals; he loses those rights and duties only if he loses the red hat. Theodore McCarrick resigned from the college of cardinals on July 28, 2018; Francis additionally suspended him from the exercise of any public ministry and directed him to observe a life of prayer and penance because of the grave allegations of sexual abuse against him. Scottish Cardinal Keith O’Brien, who before the conclave of 2013 admitted to serial sexual misconduct, lived until his death in 2018 under similar restrictions and conditions, yet was allowed to keep his title of cardinal. As of now, Becciu has not been suspended from public ministry, or been sanctioned with a life of prayer and penance. (In interviews after his firing, he seemed to complain that his punishment appears similar to that reserved for “pedophiles.”) Besides questions about the canonical meaning of the sanctions against him, it’s also not clear what’s in Becciu’s future. He is seventy-two, and still young by Vatican standards. He is a man of the institution, not a cultural warrior, and so will likely not turn out to be another Viganò or Burke. But it is hard to imagine him quietly retiring, unless the special prosecutor does find evidence of serious crimes.

The Becciu affair amounts to an earthquake for the Vatican and for the Catholic Church in Italy. Over the last decade, even prior to Francis’s election, Becciu has been one of the most powerful men in the Vatican. He was apostolic nuncio to Cuba from 2009 to 2011, and in 2013 was appointed by Pope Benedict XVI substitute of the Secretariat of State, one of the most influential positions in the Vatican, with a portfolio of ecclesiastical and political duties. He has long-standing relationships with Italian political leaders and members of the establishment. In 2018, Francis made him cardinal and prefect of the Congregation for the Causes of the Saints.

The demotion of Becciu...is unprecedented—not only in this pontificate, but in the Vatican’s modern history.
sharetweet

Diplomatic by nature and training, Becciu embodies the low-profile style of the old diplomatic school. He never demonstrated the extravagance of a Cardinal Bertone (notorious for his lavish apartment in the Vatican) or complacency of, say, a Cardinal Sodano (who was embarrassingly silent on dictators like Augusto Pinochet and on serial predators like Marcial Maciel). But he has family members with significant business interests, and it seems that he favored them. (It’s useful to consider a particular Italian expression here: “tengo famiglia,” which expresses the idea that having a family can cover all manner of sins.) He may also have personally used Vatican money for real-estate deals in London and elsewhere. While Francis has dismissed highly placed officials before (Cardinal Mueller, Cardinal Burke, Archbishop Gaenswein, the editor of the Osservatore Romano, the spokespersons of the Holy See press office, etc.), the demotion of Becciu and imposition of sanctions on his duties as a cardinal is unprecedented—not only in this pontificate, but in the Vatican’s modern history. As such, it also sends a strong message to other top personnel in the Curia, where there is little transparency and where with alarming regularity there are firings and arrests tied to Vatican finances.

The Becciu firing also raises a general question about where we are with this pontificate, almost eight years after it began. Aside from the men (and a few women) doing excellent work in the information departments of the Vatican, those in wider “papal” Rome, and his global Jesuit connections, just who are Francis’s people? There has been minimal turnover in the cohort of cardinals appointed by Benedict, perhaps because of the “co-residency” of the current and former pope. But it is also a reflection of the distance that Francis has always maintained between himself and the Curia. Of the eighty-eight cardinal appointments Francis has made since 2014, only a handful have been for Curia posts, and mostly not in key curial congregations. Almost all of the cardinals appointed by Francis come from—and are destined to remain in—the far corners of the Church around the world, to signal the new global dimension of Catholicism. The cardinals who at the beginning of the pontificate supported Francis (Cardinals Kasper and Marx, for example) are not as visible or active as they once were. It’s been almost two years since the council of nine cardinals was reduced to six members, with no renewals or new appointments. The C9’s most important project, the constitution of reform of the Roman Curia, began in 2014, but work has been repeatedly delayed and it isn’t exactly clear what’s happening with it. Further, in the last year there has been a growing disconnect between Francis’s messaging and that of Vatican institutions that have been working for him since 2013. The documents of the Congregation for the Doctrine of the Faith and of the Congregation for Divine Worship on the liturgy, and the document of the Congregation for the Clergy on the parish, are clearly at odds with the pope’s ecclesiology.

There are perhaps three exceptions to the above: the appointment in December 2019 of Manila’s Cardinal Tagle to the Congregation for Evangelization; the naming in October 2019 of the Jesuit Michael Czerny as cardinal at the Dicastery for Promoting Integral Human Development, and of Cardinal Kevin Farrell as prefect of the Dicastery for the Laity, Family and Life. But if Curia politics is a contact sport that must also be played with ruthless delicacy, it’s not apparent what these appointments are meant to accomplish. More change may yet be in the offing, pending nearly a dozen new senior-post appointments Francis could make this fall. This year’s appointment of sixty-three-year-old Maltese Bishop Mario Grech as secretary of the Bishops’ Synod—a key piece in Francis’s vision of a synodal church—might suggest a sense of what’s to come. Further, the announcement that the Secretariat of State will no longer have a separate budget independent from the central budget authority of the Vatican signals attentiveness to curial reform—a step toward the transparency and accountability needed for the Vatican to be included on the EU’s  “white list” of economically reliable countries. In June, the Vatican implemented new procedures for awarding public contracts, which should also help change the culture of doing business for the Holy See and Vatican City. And on October 1, the Vatican released a detailed budget for the first time since 2016—one of the fruits of Francis’s January 2020 appointment of Jesuit Fr. Juan Antonio Guerrero Alves as head of the Vatican’s Secretariat for the Economy. But overall, Francis still seems less focused on the pursuit of institutional reforms than on emphasizing synodality and spiritual conversion.

Meanwhile, since the beginning of the year—or, to put it more precisely, since Francis’s decision not to accept certain proposals for institutional reform approved at the Amazon Synod—the Vatican’s political dynamics seem to have shifted. Once reliably vocal critics like Cardinals Burke, Mueller, and Pell have muted their theological complaints about Francis. Pell has returned to Rome following the fall of Becciu, his Vatican enemy; it remains to be seen if it is only to empty his apartment, or to enjoy an ecclesiastical rehabilitation following the overturning of his sexual-abuse conviction in Australia. Much will hinge on just how correct Pell will prove to have been on curial corruption and the state of Vatican finances, and just what remains to be revealed by Australia’s Royal Commission on his wider role in the handling of the sex-abuse crisis there.

So the fall of Becciu shouldn’t be seen in isolation, but rather in the context of the disconnects between Francis and the Curia, and their effects on his mission of reaching the peripheries he so often refers to. It reflects a more general problem of balance between spiritual reform and good governance, and of the unfortunate separation of the institutional and charismatic dimensions of the Church (as so tragically exemplified by the sex-abuse crisis). On the right bank of Rome’s Tiber River is the burial site of Peter, which symbolizes the church of institutional leadership of Peter and his successors (St. Peter’s Basilica), and on the left bank the charismatic church of Paul (the basilica of St. Paul outside the Walls). Being pope, pontifex, is also about rebuilding the bridges between these two banks.