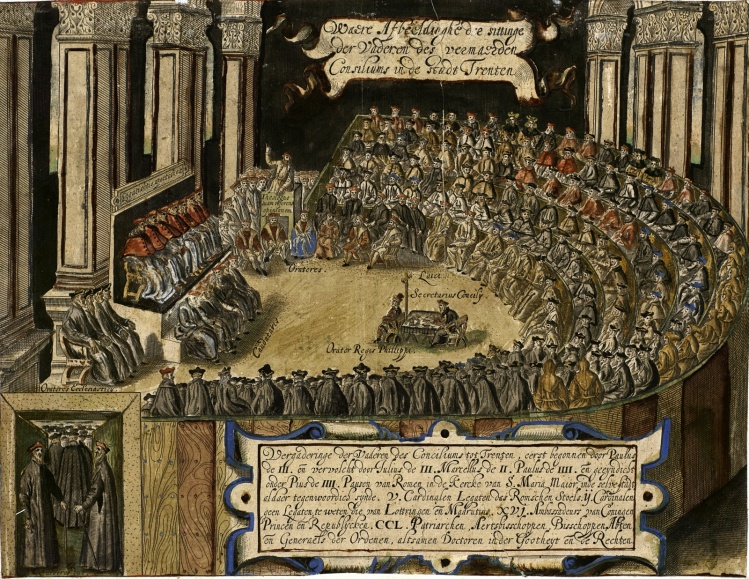 With great energy and unblinking conviction, E. Christian Brugger, who is now professor and dean at the School of Philosophy and Theology at the University of Notre Dame, Australia, argues that the Council of Trent (1545–1563) taught unequivocally that marriage is indissoluble. The book prompts at least three questions. Why did the author write it? Is his claim true? What does, or might, his claim mean?

In 2004 Kenneth Himes and James Coriden published a substantial article asserting that the church’s teaching on the indissolubility of marriage is “unrealistic, incoherent, and injurious” and furthermore that the teaching is neither de fide nor definitive doctrine. In 2011 Germain Grisez and Peter F. Ryan, SJ, published a refutation of Himes and Coriden that also addressed the work of the Belgian Jesuit Piet Fransen, on whom Himes and Coriden had based part of their argument. Fransen had built his case by exploring the canons of Trent. Accordingly, Brugger decided to investigate Trent’s teaching for himself. Then in 2014 Walter Kasper, on the invitation of Pope Francis, gave an address to a group of cardinals, subsequently published in English with the title The Gospel of the Family. Kasper suggested that in certain circumstances divorced and remarried Catholics might be readmitted to the sacraments. There followed two Synods on the Family, which amplified the noise on all sides of this neuralgic issue. So, Brugger says, his modest scholarly exploration of one issue treated at Trent has become a big deal and merits a full study. I’ll just add that almost since the end of Trent, the topic of the indissolubility of marriage had come up pretty frequently with answers on both sides of the question, albeit with the majority holding for strict indissolubility.

Trent left behind a voluminous record. Because of political and ecclesiastical strife in the sixteenth century the council met in twenty-five discontinuous sessions from 1545 to 1563. In the most widely used edition, that of Norman J. Tanner, SJ, the facing-page Latin and English text runs 139 pages of tiny print. Throughout the twentieth century, tireless scholars also published the verbatim records of the discussions held in the theological congregations and general sessions along with correspondence, occasional tracts, and other materials. Brugger worked through this material diligently. His actual text runs to 147 pages that are followed by 124 pages of appendices. One (“Authorities”) assembles statements on marriage by theologians from the church fathers to Cardinal Cajetan and Desiderius Erasmus, by popes, and by councils; one quotes and tabulates in great detail the discussions in the General Congregations and sessions 23 and 24 of 1563; and one gives a concise schedule of all the meetings of the Council of Trent.

Brugger’s focus on marriage needs a little framing timber. Marriage was discussed in 1547 in Bologna. Fear of plague caused the council to move from Trent to Bologna, then to adjourn, and then to reconvene in Trent. Six canons on marriage were proposed but none was promulgated. In the council’s twenty-third session in the summer of 1563, there was substantial discussion of marriage but no legislation. The council’s twenty-fourth session in the autumn of 1563 promulgated twelve canons on the sacrament of marriage. Of these only two directly addressed indissolubility. I shall come to them in a moment. Session 24 also issued “Canons on the Reform of Marriage,” arrayed in ten chapters, which addressed prohibitions on matrimony, polygamy, and concubinage. Brugger does not discuss these chapters. Some of them would tend to buttress his argument, but some do specify circumstances under which a marriage can be dissolved. All in all, marriage was not a key issue at Trent. Brugger admits that his argument is based entirely on Canon 7 of Session 24—seven lines out of seventy pages.

To understand Brugger’s argument, it is necessary to look briefly at Canons 1 and 5 and closely at Canon 7.  Canon 1 teaches that marriage is “in a true and strict sense one of the seven sacraments of the Gospel dispensation.” Canon 5 says that “heresy, or irksome cohabitation, or continued absence” are not valid grounds for dissolution. These two canons are aimed directly at the Reformers who denied that marriage was a sacrament and allowed for divorce under at least the three specified circumstances. Most of the scholars who have read Trent on marriage less severely than Brugger claim that the council’s fundamental aim was to defend the sacramentality of marriage and to protect the church’s right to teach authoritatively on marriage. Canon 7 says, “If anyone says the church erroneously taught and teaches, according to evangelical and apostolic doctrine, that the bond of marriage cannot be dissolved by the adultery of one of the spouses; and that neither party, even the innocent one who gave no grounds for the adultery, can contract another marriage while their spouse is still living; and that the husband commits adultery who dismisses an adulterous wife and takes another woman, as does the wife dismissing an adulterous husband and marrying another man: let him be anathema.” The question of adultery is important because of the “exceptive clause” in the Gospel of Matthew 19:9—“I now say to you, whoever divorces his wife (lewd conduct [Greek πορνεία, Latin fornicatio] is a separate case) and marries another commits adultery, and the man who marries a divorced woman commits adultery.” For the Orthodox, this verse opens up more than a dozen valid cases for legitimate divorce and remarriage, for the Reformers, at least three. Many scholars have also read the Matthean verse in such a way as to legitimize divorce, at least in cases of adultery, while acknowledging in principle that marriage is indissoluble.

For Brugger Canon 7 is unambiguous, based on Scripture and tradition, and focused on matrimonium ipsum (marriage itself, the very nature of marriage) and not on the Reformers. He does acknowledge the anti-Reformation emphasis of Canons 1 and 5.  He builds his case partly from the text of Canon 7 and partly from a careful reading of countless pages of theological discussions pertaining to Canon 7 at Trent. His text and his tables show that views were not unanimous but they were pretty overwhelming. Some voices wanted to omit the anathema while a few others wanted an even stricter formulation.

The wording of Canon 7 is odd. The language proposed in session 23 began “If anyone says, that on occasion of the adultery of one of the spouses a marriage can be dissolved...let him be anathema.” In August 1563 the Venetian delegation raised an urgent matter. Venice controlled many lands where the hierarchy was Catholic but much of the population was Orthodox. Because the Orthodox permitted divorce and remarriage for many reasons, the Venetians insisted that the strict wording of the proposed canon would unduly burden not only the Orthodox but also the Catholic prelates in Venetian territories. Thus the indirect formulation quoted above: the anathema shifted from anyone who claimed that adultery legitimated divorce to anyone who claimed that the church errs in teaching that adultery does not legitimate divorce. Brugger lays all of this out carefully and he cites the key sources in both Latin and English translation.

So, Trent taught that marriage is indissoluble and in doing so affirmed a tradition that reached back to Christ himself. Yet neither Brugger nor those who interpret Trent differently than he does are tendentious. There is room for disagreement. Conservatives like Brugger do not like to talk about the “spirit” of a council. They prefer a strict construction of a council’s legislation. But Brugger builds his strict interpretation of Canon 7 on the foundation of his reading of the discussions in the congregations and sessions, on the spirit of Trent where matrimony was concerned. Charles de Guise, the cardinal of Lorraine, added the phrase “according to evangelical and apostolic doctrine” to the initial formulation of the canon in order to clarify the basis for the church’s teaching. In 1972 Cardinal Walter Kasper said that Canon 7 was based on but not identical with the teaching of Christ. Understanding of Scripture has changed over time and might again in this instance. The indirect formulation of the opening of Canon 7 leaves the door ajar, albeit not wide open, to the possibility that the church might one day teach differently, with the clear implication that a rejection of the new teaching would be anathema. Brugger himself, in his Capital Punishment and the Roman Catholic Moral Tradition, showed that the Catholic Church can rethink and understand anew its own teachings.This, of course, is what John Noonan taught us all in his A Church That Can and Cannot Change.