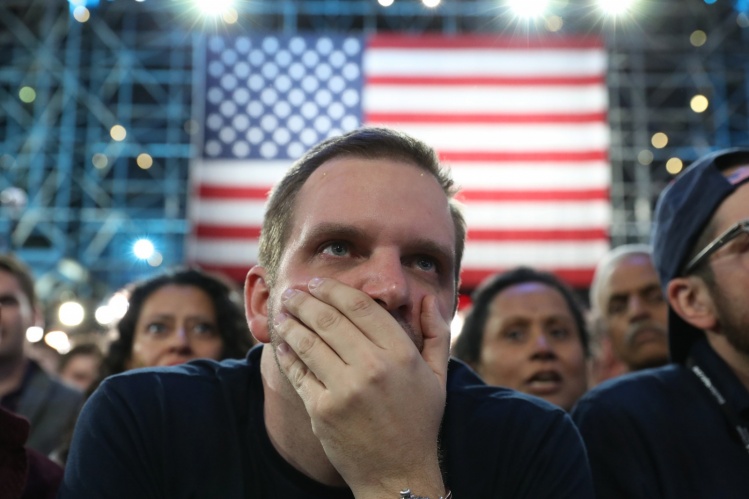 Last week the New York Times ran a front-page article, “Trump’s Doubts on Vulgar Tape Stun Aides,” revisiting the notorious comments he made on Access Hollywood about grabbing women’s genitals. The article disclosed that the president has been “raising the prospect with allies that it may not have been him on the tape after all.” Relating this turn of events, the Times does not mince words: “Mr. Trump’s falsehoods about the ‘Access Hollywood’ tape are part of his lifelong habit of attempting to create and sell his own version of reality.” The article quotes Republican Senator Jeff Flake of Arizona, who has addressed Trump’s mendacity before. “It’s dangerous to democracy,” Flake said after hearing about Trump’s attempt to deny the tape. “You’ve got to have shared facts. And on so many of these, there’s empirical evidence that says no: You didn’t win the popular vote, there weren’t more people at your inauguration than ever, that was your voice on that tape, you admitted it before.” (Monday’s New York Times featured an op-ed by Billy Bush, famously caught laughing at Trump’s remarks on that Access Hollywood tape, reminding Trump that he did indeed say what he was recorded saying.)

I know that liberals and progressives, chastened by the results of last year’s election, are supposed to reckon seriously with the meaning of Trump’s victory, and particularly with the voices of the people who voted for him. Staunch liberals from Mark Lilla to Nicholas Kristof to  Thomas B. Edsall have produced excellent and well-reasoned arguments for doing so. Their writings urge us to hearken to the plight of Trump’s white working-class voters, and to reconfigure the Democratic party accordingly.

I’m open to these arguments. Yet I find myself careening wildly between this responsible, self-questioning, even conciliatory point of view, and a starkly different opposite impulse—the desire to get in the face of Trump supporters and shout, Are you NUTS? Nick Kristof’s op-ed was titled, “Trump Voters are Not the Enemy.” But too often for my own comfort, I think they are.

The problem, day after day, is that Trump displays behavior that is simply beyond the pale for a president of the world’s leading democracy. We knew this about him from the start, a man whose candidacy was launched by his propagating an insidious lie about the (black) president’s nationality. Candidate Trump went on from there. Openly inciting audience members to attack protestors. Praising Vladimir Putin—a vicious and corrupt tyrant—for being “in control of his country.” Suggesting that a journalist asked a tough question because she was menstruating. Boasting about his penis size during a presidential debate. Routinely calling women “pigs,” “dogs,” “slobs,” and “disgusting animals.” Advocating the torture of terrorist suspects and the murder of their families. Proposing that his opponent’s Secret Service guard be disarmed (“let’s see what happens to her then!”). Calling the pope un-Christian and John McCain a coward. Sneering at Hillary for taking a bathroom break (“It’s disgusting, I don’t want to talk about it.”) Mocking handicapped people.

The problem, day after day, is that Trump displays behavior that is simply beyond the pale for a president of the world’s leading democracy.
sharetweet

And President Trump has kept with it—right out of the gate, beginning with those false claims about the size of his inauguration. He advises any NFL team owner with a protesting player to “get that son of a bitch off the field.” Advocates that Americans who burn the flag in protest should have their citizenship revoked. Urges police officers to treat suspects more roughly.  On the floor of the UN, he threatens to “totally destroy” North Korea, mocking and taunting its leader as “Rocket Man.”  He expresses admiration for the Philippine President Rodrigo Duterte, a murderous thug. He rants against journalists and expresses sympathy with Putin’s view of the press as an enemy he’d like to do away with. He announces major policy reversals in the middle of the night, by Twitter, without telling the relevant governmental agencies—including the military—and leaves them scrambling to catch up. He rails at his own Justice Department and undermines the work of the FBI. He makes false or misleading statements at a rate of five per day.

Then there’s his bizarre fixation on trivial spats and personal insults. He mocks a senator from his own party (Bob Corker) for being short. He taunts Mika Brzinski about her plastic surgery. The other week he stooped to trade Twitter jabs with the father of college basketball player LiAngelo Ball, calling him “an ungrateful fool,” and petulantly demanding credit for getting his son out of those shoplifting charges in China. Trump’s tweet? “It wasn’t the White House, it wasn’t the State Department, it wasn’t father LaVar’s so-called people on the ground in China that got his son out of a long term prison sentence—IT WAS ME.”

The egregiousness of Trump’s behavior and bearing as president is practically surreal. And I mean that literally. On and on it goes, a never-ending catalogue of puerile behavior that leaves one agog. At least, it leaves me agog. How in the world can any sane person think a president should be wasting his time, and our nation’s credibility, doing that kind of thing? Again and again I ask Trump supporters: aside from all differences of political affiliation, don’t you find this kind of thing simply embarrassing and weird, coming from the president of the United States?

As I insist to a friend of mine who voted for Trump, this is not a question of mere “personality.” It’s judgment and character. At best, our president’s impulsivity seems reckless and self-indulgent; at worst, it resembles the style of an autocratic ruler. And a minor one at that. Trump is a tin-pot dictator. He should be president of Kazakhstan. He could build statues to himself, throw reporters in jail, and cow everyone around him into nervous sycophancy.