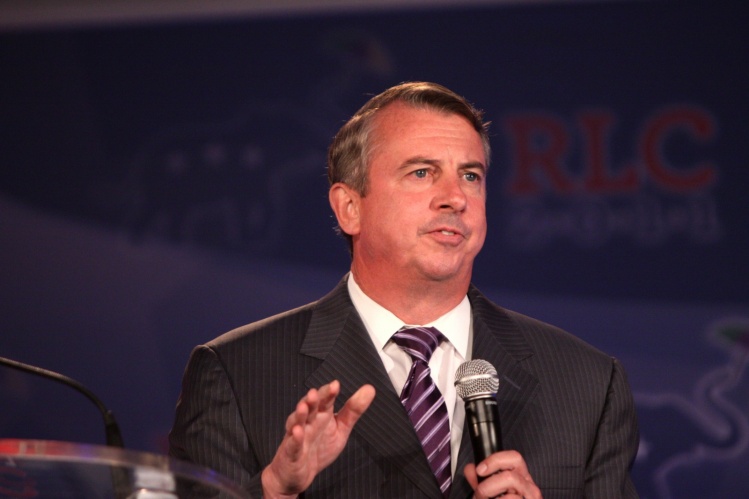 Ed Gillespie, the Republican candidate to be Virginia’s next governor, is a proud Catholic who touts his prolife, family values. It’s worth asking then why this son of Irish immigrants and graduate of The Catholic University of America is running a viciously anti-immigrant campaign that is out of step with the advocacy of church leaders—and pandering to voters who are rallying behind Confederate monuments.

The simple answer is that stoking fear and sowing division often works. Demagoguery turned out to be a winning strategy for Donald Trump. Our Tweeter-in-Chief praises Gillespie for being tough on crime, and (in a tweet, of course) said that he will “save our great statues/heritage.” A lobbyist and former head of the Republican National Committee, Gillespie is a quintessential establishment insider. But after the electoral earthquake that scuttled so many political certainties last November, Gillespie rebooted. He’s now running on an agenda that fuses tax breaks for the rich and white identity politics to offer red meat to both the corporate class and segments of working-class whites who have rallied behind an “America First” nationalism.

Gillespie has aired a series of ugly television segments attacking his opponent, Democrat Ralph Northam, for being “weak on MS-13” (a notorious Salvadoran gang) and favoring “sanctuary cities that let illegal immigrants who commit crimes back on the street.” Menacing images of tattooed Latino men and the gang motto “Kill, Rape, Control” flicker on the screen. Not surprisingly, independent fact checkers have called Gillespie's ads misleading, and the entire episode is reminiscent of the notoriously racist “Willie Horton” television spot George H. W. Bush used to tag Mike Dukakis as soft on crime during the 1988 presidential campaign. Gillespie also opposes in-state college tuition for young immigrants who have been granted Deferred Action for Childhood Arrivals (DACA) status, an Obama-era policy that provides protection for immigrants brought to the United States as children. President Trump rescinded the program and has given a dysfunctional Congress a tight deadline to find a solution. The Virginia Catholic Conference, the policy arm of the state’s bishops, has advocated to keep the in-state tuition for “dreamers.”

Our Tweeter-in-Chief praises Gillespie for being tough on crime and (in a tweet, of course) said that he will “save our great statues/heritage.”
sharetweet

Given how much Gillespie’s campaign ads depict immigrants as violent scourges—considerable research actually shows immigrants are less likely to commit crime than people born in the United States—I wonder whether he ever pauses to remember that his own ancestors faced an America that branded Irish immigrants as drunken, dirty hordes who threatened the purity of Protestant values and even the pillars of democracy? The candidate once decried the same scare tactics he’s now hoping will lead him to victory next week. “Anti-immigration rhetoric is a political siren song, and Republicans must resist its lure,” he wrote in a 2006 Wall Street Journal op-ed. He’s clearly not the first politician to shape-shift, but Gillespie’s journey from big-tent Republicanism to nativist opportunist is a telling example of what’s happened to the GOP in recent years.

Along with running hard to the right on immigration, Gillespie is doubling down on white identity politics by defending Confederate monuments at a time when those symbols of white supremacy have become a faultline between conservatives of conscience and reactionary Republicans still embracing such a repugnant ideology. As Ronald Brownstein wrote in the Atlantic:

The Virginia gubernatorial contest has unexpectedly become a test case of the explosive politics of race in the Donald Trump era. The outcome could tug the Republican Party much further toward Trump-style racial provocation and polarization next year. Or it could warn the GOP that such positioning carries too high a political price among white swing voters and minorities.

Whatever the political price, the moral bottom line is clear.

A Catholic candidate for public office who tells you how important his faith is and who takes pride in his Irish immigrant past while running a campaign based on nativist fear mongering dishonors both his faith tradition and the best of our nation’s values. Gillespie and other Catholic Republicans blindly jumping on the “populist” train should pause to consider how Pope Francis offers a better framework to understand the economic anxiety and sense of cultural dislocation that has led to the resurgence of right-wing nationalism in Europe. Solidarity, the pope said in a March speech to over two dozen heads of state, is “the most effective antidote to modern forms of populism.” Solidarity is what reminds us that “when one suffers, all suffer,” Francis explained. In contrast, a tribalism that divides us along lines of race and nationality leads to “false forms of security.”

If Catholics on the left and right have any potential to model a better kind of politics, we need to decisively reject candidates who appeal to our worst fears, find a way to confront complex challenges with pragmatic hope and lead from below when those at the top aren't up to the task.

Woe to the Texas Attorney General!