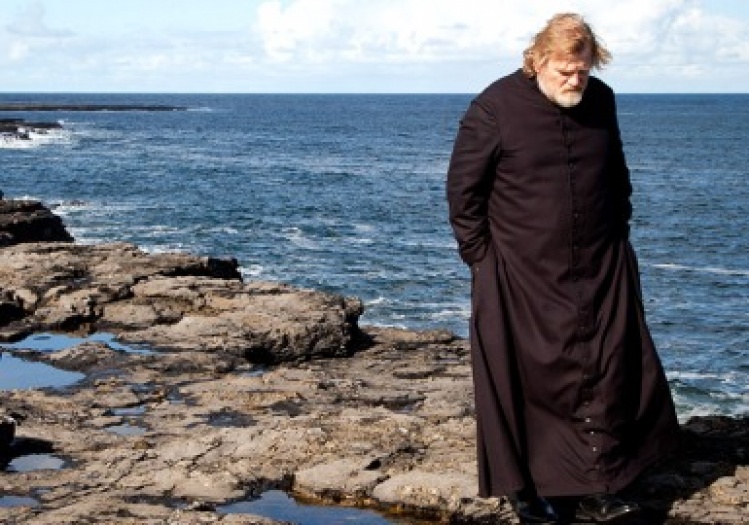 Calvary belongs in that select company of films (Diary of a Country Priest, I Confess, Under the Sun of Satan, and a very few others) that deal powerfully with the plight of a priest who finds himself at odds with his community. Its achievement is all the more impressive when you consider how hobbled the movie is by its own gimmickry.

Fr. James (Brendan Gleeson) is the pastor of a village parish in County Sligo, Ireland. One day a shadowy figure enters the confessional and tells Fr. James that he has one week to wind up his affairs and make his peace with the Lord. The man says that a pedophile priest ruined his life by raping him for years, starting when he was seven, and he has decided that only the murder of a good priest will deliver the obscene shock to the church that it deserves. That good priest is Fr. James. Having designated the nearby beach as the place of execution, the man asks, “Have you got something to say to me?” The priest answers, “Not now, but I’ll think of something by next Sunday.”

That response and the steady tone in which it’s uttered encapsulate Fr. James’s character—his self-possession, faith, and grim humor. Given these qualities, it’s not too surprising that he spends the next week not flailing in fear but simply listening to what his fellow villagers have to say, giving what advice he can, tending to his sick dog, and saying what could prove to be farewell to his daughter. (He’s a widower who became a priest in middle age.) He knows he could go to the police, since death threats aren’t covered by the seal of confession, but James has other plans: he’ll try to work out the vengeance seeker’s salvation by the time of the mortal appointment.

Now some might consider this premise gimmicky enough, but I think the seven-day time limit brings shape and suspense to the drama, while the priest’s resolve certifies his heroic character. But, alas, writer-director John Michael McDonagh adds one extra twist: James makes it clear to his bishop that he knows exactly who has threatened him, though we don’t find out who it is till the film’s climax. This is an artistic mistake for two reasons. First, it’s the device of a detective story, which Calvary isn’t, not the device of a theological suspense narrative, which Calvary certainly is. It’s as if a Graham Greene or François Mauriac novel got rewritten by Agatha Christie.

Second, in the scenes of Fr. James dealing with his flock, Gleeson has been directed not to show any unusual degree of emotion when he comes into contact with the one who threatened him, because that would give the game away to the viewer. But the drama would have been heightened, not deflated, if the priest and his menacer had silently acknowledged their sinister secret as each went about his daily business in full view of fellow villagers. The banalities of daily life would then be conducted under a sword of Damocles that only the priest and the vengeance seeker could see. Nor would this have eliminated the suspense since, as in Hitchcock’s I Confess, we would be constantly wondering how this silent duel of devotion vs. evil would conclude. Would the would-be killer change his mind?

Despite this weakness in its plot, Calvary grips, and grips fiercely. As its title announces, the priest’s journey through what might be his last week is a climb up Golgotha, and each contact with a villager is a kind of station of the cross. What infuses these modern encounters with painful power is the priest’s bewilderment in the face of people who are sinning not for pleasure but to torment themselves. Fr. James may be struggling with his fear of death, but his bigger temptation is despair at not being able to save a single soul. Perhaps that’s another reason why he seems to have so much sympathy for his would-be killer. Anyone who’s desperate enough to plan a murder may be a better candidate for salvation than those merely playing with sin, which seems to be the major hobby of most of the villagers.

I once attended a party where a young woman, miserably drunk, kept laughing so loudly and joylessly that every laugh seemed a cry of pain. When our host finally stared at her in compassionate bemusement, her laughter grew even more hysterical, as if she were daring him to remonstrate. That’s pretty much the relationship between Fr. James and the villagers. (It was never clear to me which villagers he could call parishioners since we never see how many of them attend Mass.) Nearly all of them—a promiscuous wife, her nervously flippant husband and sullen immigrant lover, a policeman paying for sex from a disturbed male prostitute, a rich man haunted by the financial ruin his wheeling-dealing has wrought, an atheistic doctor with no compassion for his patients, even a serial killer the priest visits in prison—are possessed by a hilarity devoid of joy and fueled by a false sense of liberation. With the crippling of the church’s authority in a country where Catholic teachings were once (virtually) law, a clear moral criterion has been lost, resulting in spiritual vertigo. The quips, sarcasms, and tipsy blather directed at the priest seem just so many desperate efforts to provoke his censure, but why would anybody want to hear such censure? Nostalgia for the good old days when moral decisions were more important than lifestyle choices and a priest had the authority to tell you with certitude when you made the wrong one? In any event, it is Fr. James’s confrontations with people boasting about the very conduct that makes them miserable that gives Calvary its haunting power, not the guessing game of who is gunning for the priest.

Unlike McDonagh’s previous feature, The Guard, in which the good guys—Gleeson as an Irish cop and Don Cheadle as an American detective—had the majority of the wisecracks, Calvary’s hero gets lines so humdrum they verge on, and sometimes fall into, cliché. To the serial killer’s query as to whether God understands him, Fr. James merely answers, “If God doesn’t, nobody can.” When the rich swindler declares himself a lost cause, the priest replies, “No one’s a lost cause.” It’s as if, in the face of self-loathing, a spokesman for God can respond only with self-effacing plainness, rather like my host’s taciturnity in the face of the young woman’s battering laughter. Still, plainness has its limits, as does patience, and Fr. James’s store of both qualities is getting low in the face of death. He almost hops a plane, but at the airport he runs into a French woman he had comforted a few days before after her husband died in a car accident. Their brief conversation—in view of baggage handlers smoking and chatting while they lean indifferently against her husband’s coffin—pulls the priest back to his destiny.

Like Carl Dreyer’s magnificent The Passion of Joan of Arc (1928), another cinematic climb up Golgotha, Calvary is a film of close-ups. Faces compose the real landscape here, and the camera examines them like a detective adducing clues. Does that smirk contain a glimmer of self-doubt? Does that frown include or preclude compassion? But unlike Dreyer, who shot indoors against minimalist backdrops, McDonagh has his talented cinematographer, Larry Smith, occasionally train his camera on the rocky Streedagh beach or on Ben Bulben, using nature as a breathtaking background against which the intrigues of village life can seem trivial. Still, no cliffside can hope to be as craggy as Brendan Gleeson’s face, nor can any ocean rage as tempestuously as the emotions churning within his character. He’s the right actor for a movie in which the past roils the present, and Yeats’s “rough beast” slouches closer and closer.