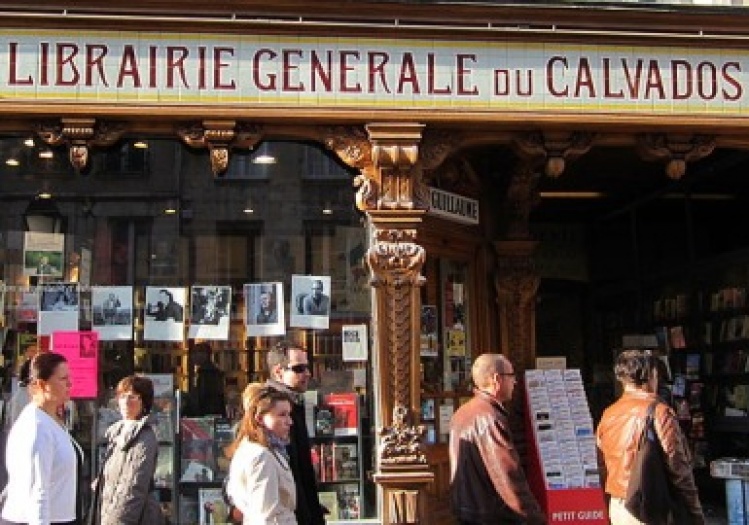 As an exchange student in Paris in 1999, Phyllis Cohen was drawn to the city’s used bookstores. She went to work in one, and ultimately she decided to open one herself: Berkeley Books of Paris, which she founded in 2005 with two friends, in a location near the Luxembourg Gardens.

Cohen first fell in love with bookstores at Cody’s Books and Moe’s Books in Berkeley, California; her shop’s name is partly an homage to them. Moving to New York City at nineteen, she worked at Posman Books and at St. Mark’s, a longstanding staple of the East Village. Cohen recalls a job application that spanned three pages and asked her to list her “Ten Desert Island Books.” For her it was an ideal community, a place where people lived and breathed books.

Today such communities are endangered. Both Posman and St. Mark’s weathered the storm of the 1990s and early 2000s, when indies were pushed out of business by goliaths like Borders and Barnes & Noble—chain stores that, in turn, are now being squeezed out by Amazon. St. Mark’s is still hanging on, but not without a scare. In July, unable to pay increased rent, the store had to vacate. Loyal customers and other booklovers donated money to help fund a move to a new location on Third Avenue.

It’s not just U.S. bookstores that are feeling the threat. In July of this year, French legislators passed a new law, popularly called the “Anti-Amazon Law,” barring large online companies from offering free shipping on their books—an inducement long used by Amazon and FNAC, the largest retail store in France, to lure customers away from other outlets. Whether the law is enough to save independent bookstores is unclear. (Amazon responded by pricing shipping at one cent.) But what is clear is the French government’s willingness to protect independent bookstores. Discussing the Amazon law, French Minister of Culture Aurélie Filippetti pledged “to defend the network of independent bookstores, because they are essential not only for access to culture, but also for the cultural life of our land [terroir].”

Filippetti’s use of the word terroir evokes a winemaker intimately tied to the land and to the riches of an artisanal tradition. The analogy casts the independent bookstore as a repository of French cultural memory and practices, connecting the reader to a literary sphere, just as the vintner connects the wine-drinker to the soil. For its part, Amazon argues that such cultural mediation is unnecessary, a relic of the past. We no longer need middlemen; the important relationship is the one between the author and the reader. In this view, not only do independent bookstores offer no added value; they actually get in the way, preventing the reader from being connected to an unlimited pool of books. They are symptoms of market inefficiency.

From its inception Amazon has sought to disrupt the traditional bookselling market. The tactic is simple: undercut the competition, selling books at a loss if necessary, while building up a huge customer base and using it to mine salable consumer data, cross-market other products, and leverage industry prices. The plan has succeeded brilliantly; current estimates are that Amazon sells about half of all books sold in the United States. In turn, it has used its dominant market position to pressure publishers. Forbes reports that Random House, the largest book publisher in America, gives Amazon a 53 percent discount on its books. Amazon’s attempts to bully publishers have triggered a bitter dispute with the publisher Hachette over such issues as who gets to control the price of e-books. In response to what it views as Hachette’s recalcitrance, Amazon has delayed the shipping of a number of the publisher’s titles. For instance, books by Hachette author Malcolm Gladwell, previously available in two days, now ship in one to three weeks.

The central assumption under which Amazon operates is that books are no different from any other commodity. “Books don’t just compete against books,” Amazon vice-president Russell Grandinetti recently told the New York Times. “Books compete against Candy Crush, Twitter, Facebook, streaming movies, newspapers you can read for free. It’s a new world.” Indeed, one might ask, why should I pay $26.10 for Malcolm Gladwell’s newest hardcover, when the same amount of money gets me unlimited movies and TV shows for three months through Netflix—or when I can download the complete works of Jane Austen for free at Gutenberg.org?

The French are not seduced by this logic. Official French state policy recognizes that books are different and require protection. In 1981, the “Lang Law,” named after then-minister of culture Jack Lang, fixed prices on French-language books, insulating independent sellers from market pressures by forbidding retailers from discounting more than 5 percent from the publisher’s list price. More recently, the government extended such price-fixing to e-books as well. The state also offers subsidies and tax breaks to independent bookstores. For the most part, these protectionist policies have worked. Currently only about 10 percent of new books sold in France are sold by Amazon.

AT ITS HEART, the battle between the indie bookstore and Amazon is a contest over consumer culture—what it is, and who will define it. Amazon offers the consumer unlimited options, and makes them available almost instantly. You don’t even have to leave your house. The Amazon vision of utopia places convenience and choice—and cost—front and center. The independent bookstore, on the other hand, invokes a different utopia: one where the cultivation of a taste for books is done communally, through the slow process of browsing the store’s collection, with an informed bookseller as guide.

The two models entail different habits and behaviors. Phyllis Cohen notes that more people these days enter her store on a specific errand. It almost seems they have forgotten the semi-aimless curiosity that is the essence of browsing. Instead, they come for a particular book, and they want it now. In this sense, Amazon seems to be winning the battle over the formation of global consumer habits, replacing browsing with searching. This shift entails a loss both for the individual and for the general culture. As the critic Leon Wieseltier wrote two years ago in a perceptive essay in the New Republic, “browsing is a method of humanistic education.... When you search, you find what you were looking for; when you browse, you find what you were not looking for.”

But searching is what Amazon is all about; and many people find it difficult to resist the company’s promise of access to a near-infinite trove of books—or the devices that give you access. I, for one, was an early adopter of the Kindle. Having had the nightmarish experience of packing suitcases filled with books for a research trip to Europe, I rejoiced at the prospect of being able to store my entire library on a small device. But after an initial period, the excitement faded. The e-books I downloaded often had poorly formatted text, sometimes with no paragraph indentations. The typeface was drearily uniform. The option to keep switching from one book to another proved distracting, making it hard to concentrate on long novels. Over time I found myself reading less and less on my Kindle. War and Peace remains loaded on it, still untouched.

Of course, e-book design will continue to improve, and it’s true that e-books have the potential to offer readers aesthetic experiences that physical books cannot. Yet a basic fallacy underlies the e-book: the assumption that books consist purely of “content,” words that can be swapped in and out of any device, whether tablet, phone, or laptop. As book lovers know, a book consists of more than just text. Every part of a book—its binding, its typography, its cover—reflects choices made by editors, designers, and typesetters. The reader’s relationship to the text is mediated by these choices and the physical realities they create; in a fundamental way they affect his or her aesthetic experience of the book. The e-book undoes this mediation—and in the process threatens an entire ecosystem of bookbinders and typographers.

At stake is not just the survival of jobs, but also the thread that connects us with centuries of cultural and historical practice. In the Amazon digital utopia, computer algorithms automatically make many of the aesthetic choices in book production. The physical book, in contrast, links us to a collective human past. And here, perhaps, is a crucial difference. In five hundred years, will there be traces of the individual hands that entered the code or helped digitize the text? One of the more haunting sites on the internet is Krissy Wilson’s “The Art of Google Books,” where we can see images of the hands of employees who flip book pages as the scanner takes the picture. Google never intended for these images to be shown, but Wilson’s website has captured them for posterity. The images serve to remind us that humans toiled to convert our physical artifacts into digital ones. Some of the hands have wedding bands. Others have nail polish. One pair is captured while digitizing a 1730 edition of Milton’s Paradise Lost.

Despite much gloom and doom, all is not lost for the paradise that is the independent bookstore. As Andrew Leonard reported recently at Salon, there are signs of a revival. Since the low point in 2009, indie bookstores have rebounded in the United States, their ranks growing by 19.3 percent. The reasons are several. The fall of Borders created a vacuum that indie bookstores helped fill. The “shop local” movement mobilized consumer sentiment on behalf of a neighborhood, brick-and-mortar experience. And then there is that terroir factor. At Berkeley Books of Paris, Phyllis Cohen encounters American tourists who view going to the bookstore as appealingly nostalgic—a “bespoke, exotic experience,” she says. They lament that their corner bookstore back home has closed down, and hope that someone will open a new one.

The physical book, Phyllis Cohen insists, has a “soul,” and as a bookstore owner she feels not only a responsibility to her customers, but to the book itself. “It actually goes in both directions,” she says, describing her daily mission to help the books in her shop “find good homes.” The bookstore as she conceives of it is far more than a mere marketplace where goods are exchanged for money. “It’s why I don’t sell my books online,” she explains. “If I don’t see the people, I can’t match them up with their books. I can’t just sell them like they’re shoes.”

Selling books, Cohen continues, is “a personal thing,” which is why she believes that her store and others like it will survive and flourish. “Amazon can’t compete with me,” she says. “They sell books, it’s true, but I really don’t think we’re in the same business.”

Albert Wu teaches history at the American University in Paris.