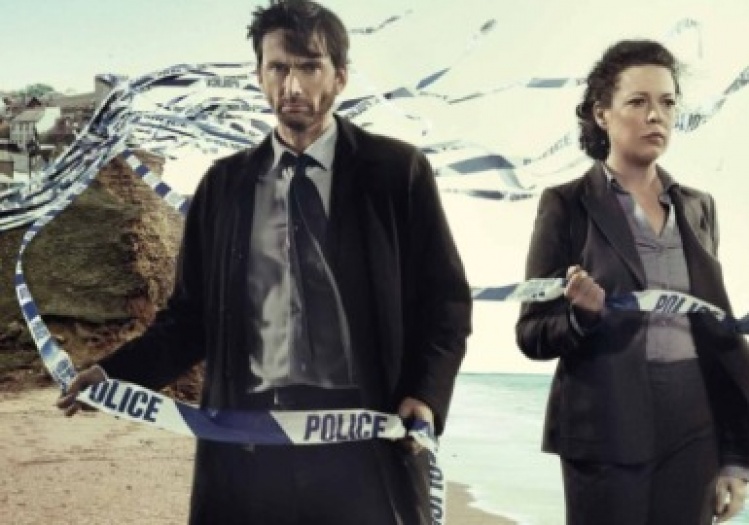 If W. H. Auden were alive today, he’d be setting his TiVo to catch Broadchurch, the atmospheric, artfully methodical detective drama airing on BBC America August 7 through October 2. A hit in the UK, where it was the most Tweeted-about TV program ever, this eight-episode series is not edgy, innovative or—like so many mystery hopefuls these days—Scandinavian. Instead, it is a rounded-out version of a classic British whodunit—the kind of reassuringly formulaic entertainment that Auden paid tribute to in his 1948 essay “The Guilty Vicarage.”

In that piece, Auden argued that detective stories allow readers who suffer from a keen sense of sinfulness to fantasize about “being restored to the Garden of Eden.” Auden thought the best mysteries facilitated this virtual restoration by adhering to certain conventions: their narratives unfurled within a subsection of society, for instance, and their characters included many figures who initially appeared innocent, only to reveal varieties of guilt.

These and other vintage sleuth tropes turn up in Broadchurch, which initially feels a tad boilerplate, but grows increasingly suspenseful and engrossing, thanks to canny pacing, smart plotting, and vivid performances. Auden, who preferred whodunits set in rural England, would delight in the show’s picturesque milieu: a seaside town, resplendent with quaint harbor vistas, scenic lanes, and awe-inspiring beaches.

While spinning its mystery tale, Broadchurch paints a careful portrait of this eponymous town—a close-knit hamlet where newsworthy events are rare. When an eleven-year-old boy named Danny is murdered, and national journalists descend, the residents—including the amiable Detective Sergeant Ellie Miller (Olivia Colman), of the local police force—are stunned. Miller is dismayed to find herself working on the case with a surly newcomer, Detective Inspector Alec Hardy (David Tennant), who has no time for sentiment or social niceties, and who sees guilt at every turn. Believing her neighbors to be good, upright folk, Miller abhors her colleague’s cynicism. “Most people have a moral compass!” she exclaims to Hardy at one point, after he shares a suspicion. “Compasses break!” he replies.

As Miller and Hardy investigate, and an eager cub reporter at the local paper (Jonathan Bailey) does his own research, alibis crack and secret sins tumble into the open. The local vicar, Rev. Paul Coates (Arthur Darvill), has something to hide. So does Danny’s father (Andrew Buchan). So, for that matter, does Hardy, who failed spectacularly at his last big murder case, and so has all the more to prove with this one.

Refreshingly, Broadchurch doesn’t draw much on the hard-boiled-mystery tradition, as so many modern mysteries do: the characters have flaws, but the world they live in isn’t thoroughly tawdry and corrupt, and Miller and Hardy don’t feel the need to bend rules in order to achieve justice. The show does stray from classic whodunit territory in focusing frequently on the grief of Danny’s mother, Beth (Jodie Whittaker): in one heart-wrenching scene, we see her trying to distract herself by grocery shopping, only to find her eyes straying to Danny’s favorite cereal. In another, we see her jogging desperately along the beach, as if trying to outrun her agony.

Such scenes, with their emphasis on family heartbreak, recall comparable scenes in the first two seasons of AMC’s The Killing, an exasperating hardboiled-mystery series based on a Danish TV show. Like the family in those seasons of The Killing (I gave up before season three), the parents in the less lugubrious Broadchurch are uneasy when religion is offered as possible consolation. When the vicar suggests that Danny may be in heaven with God, Beth flings back a bitter challenge: “Tell God: Give me a signal! Something. Let me know he’s OK!” The priest is at a loss.

Like Beth, Inspector Hardy is anguished, beset by personal afflictions that reveal themselves as the series progresses. Indeed, in Hardy—plodding gloomy and unshaven through the idyllic landscape around Broadchurch—you can see the mythic underpinnings of the malaise-racked gumshoe as literary trope. From the cocaine-addicted Sherlock Holmes to Lord Peter Wimsey—wracked by remorse when he has helped send a man to the gallows—to Henning Mankell’s brooding, unhealthy investigator Kurt Wallander, to Hardy and even Miller, the detective is on some level a magical priest-king figure, who suffers for the community. The traits that make a good sleuth are traits that invite unhappiness.

“The job of detective is to restore the state of grace in which the aesthetic and the ethical are as one,” Auden wrote. It’s a job that, often, requires sweat and pain.