Bring Out Your Dead

A Review of 'The Good Funeral'
By Thomas Baker
U.S. Catholicism
Death and Dying 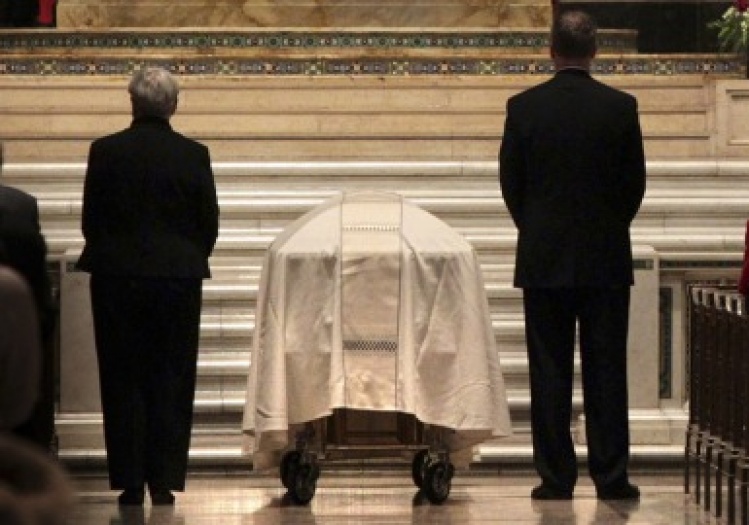 According to the country’s largest publisher of online obituaries, “passed away” remains our favorite euphemism for death by a wide margin. But I wonder if they are keeping up. Lately, more and more people I meet seem to abbreviate it simply to “passed”—“She passed last night.” Is “away” now too explicitly directional for polite company?

When it comes to both death and God, it has always been less risky to use words sprinkled with a pinch of sugar. But it is not only our talk about the dead that has been bowdlerized, but, increasingly, the rituals at which we remember them. The Good Funeral is an extended conversation on what has been lost in the process, and especially on what its authors feel is our most egregious death-avoidance tactic: the gradual disappearance of the dead themselves from the rituals at which their presence is indispensable.

Both authors should be familiar to Commonweal readers. Long is a prominent Presbyterian professor of homiletics at Emory who has written on funerals before (Accompany Them with Singing), and Lynch, a past contributor to these pages, both runs a small chain of funeral homes in Michigan and is a highly regarded poet. (He notes that he has not one but two occupations that can clear a space around him at any party.) Together, the preacher and the funeral director have apparently become something of a popular roadshow at funeral-industry gatherings, and in this collaboration they contribute alternating chapters but aim relentlessly at one target: the de-funeralized remembrance service at which, it often seems, there is “a guest list open to everyone except the actual corpse.” Here Lynch describes what many Americans now experience, either in a church or outside of one, as the typical “funeral”:

The living gather at their convenience to “celebrate the life” in a kind of obsequy-lite at which therapy is dispensed, closure proclaimed, biography enshrined, and spirits are, it is supposed, uplifted...the corpse has been dispensed with in private, dispatched without witness or rubric.

The authors’ primary complaint is not the posthumous narcissism of many funeral tributes, although all of you, I am sure, have endured at least one seemingly endless lineup of eulogists, a testimonial dinner without the necessary open bar. Instead, they want us to remember that the physical presence of the dead “is an essential, definitive element of a funeral,” and that their absence drains modern rituals of the larger questions that funerals are meant to ask. Simply being in the presence of the dead, claim the authors, brings us to a deeper level of feeling, challenges us to wonder what we believe about death, promotes serious and unexpected conversations, brings tears that it might be good for us to shed, and poses questions that only life’s turning points can confront us with.

All that, of course, is something that many people are not sure they want. Even some Christian clergy, apparently out of a sense of compassion, believe that having a corpse around can be an unnecessary trauma for the bereaved. Those who plan their own funerals in advance now frequently ask to have their body gotten out of the way with as little fuss as possible, perhaps out of a sense that they will be doing their family and friends a financial and emotional favor (see Paul J. Schaefer’s “Looking Away”).

How did we get to this point? Lynch points to the funeral industry’s most savage and effective critic, Jessica Mitford, whose The American Way of Dying, now fifty years old, can apparently still rankle a funeral director as if it had been published yesterday. Mitford’s tales of expensive caskets and pointless vaults, packaged up with laughably flowery marketing language, created a stereotype of the smarmy, predatory undertaker that hasn’t disappeared. Yet the greater damage was done not by Mitford’s claim that funeral directors cheat people but by her implication that what we do at funerals is mostly a waste of time. Mitford, writes Lynch, refused to mourn her own losses and thought other people shouldn’t make such a big deal about it either; she helped build a cultural movement toward dispensing with the dead as quickly and cleanly as possible.

More powerful than Mitford’s muckraking in the long run, however, is our culture’s obvious loss of a common sense of what funerals are intended to tell us. Even with Americans’ widespread reported faith in God, death finds these faithful tongue-tied (or theologically wrong) about what has happened to the dead, and starved for images of life after death that are either believable or appealing. Since we lack a larger, agreed-upon understanding of what death means, what we are left with is not that story but the dead person’s story, often with an upbeat gloss on his or her qualities and quirks. And if that’s mainly what we have gathered to hear, the corpse’s presence is indeed a needless downer.

We might hope that Catholic funerals would be less prone to sanitization and ritual timidity, and they are—but not entirely. Even in Catholic cemeteries, these days you might pay extra for the privilege of saying the prayers of interment at graveside; the cemetery’s preference is often now for mourners to leave the deceased at a drop-off chapel and be on their way, so that cemetery workers can do their final tasks unseen whenever they get around to it. Yet this “burial” without dirt, or a hole in the ground, or the graves and names of other family members nearby, hardly seems worth the drive. Surely we can all traipse through a little mud as a sign of our solidarity with the dead, and as a memento mori for the living that isn’t always unhealthy.

The authors emphasize that their insistence on the physical presence of the dead is not meant to denigrate cremation as an alternative to burial. But they rightly point out that, too often, cremation is chosen simply to get the deceased out of the picture as soon as possible. Lynch also asks unexpected and challenging questions about why members of the family and their clergy don’t insist on being present for the cremation itself. It is, after all, no less of a ritual moment than the traditional burial, and he points out that, among cultures that practice cremation, ours may be the only one in which it frequently takes place at an unknown, unvisited processing facility.

Perhaps inevitably in a book structured in alternating chapters, and with such an intense focus on a single cause, The Good Funeral suffers from some tiresome repetition. More disappointing, those who minister in parishes will wish that many other ingredients of a “good funeral”—music, preaching, family eulogies, wake services—got at least some attention here from these experienced, wryly humorous practitioners. But despite these flaws, this passionate, highly readable primer is an effective reminder of what funerals, at their best, do for the living: through them, “we enact and interrogate yet again what we believe about life and death...and who we are called now to be.”

Why We Need an Entrepreneurial Church