Bring Back the Drachma

Why Greece Should Leave the Eurozone
By Charles R. Morris
Economy
Foreign Affairs 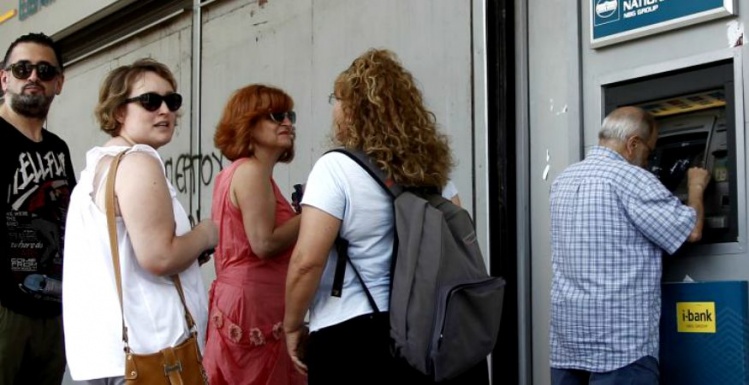 Euripides and Aristophanes might have enjoyed the current agon of the Greek government, for it offers a rich admixture of tragedy and comedy. It’s hard to feel sorry for Greece. An oligarchy of ship-owners, bankers, and politicians have enriched themselves and impoverished the country, buying off the electorate with no-show jobs, early retirements, and extensive subsidies—a banana republic in the heart of Europe.

Greece’s spendthrift ways have elicited several bailouts since 2009, each one eventuating in half-hearted austerity measures, higher debt, and lower growth. Over the past few months, the maneuvering for yet another bailout has generated a change in government, riots and demonstrations, and, most recently, a capitulation of sorts by the leftist Syriza government. But the details of that are yet to be negotiated, and no new money will be forthcoming without tough new spending cuts. August 20 is a crucial date: that’s when the Greeks must pay a €3.5 billion loan installment to the European Central Bank (ECB). A default could pave the way for the so-called Grexit, a Greek exit from the single-currency regime, which many fear could lead to a breakup, or at least radical shrinkage, of the entire eurozone.

Greece joined what is now the European Community only in 1981, half a dozen years after it had installed its first modern democratic government. The single-currency eurozone was established in 1999, but membership required standards of financial management that Greece could not meet. But in 2001, it managed to squeeze in after Goldman Sachs showed the Greek government how to falsify its national accounts.

For Greece, eurozone membership was destabilizing. Members can issue eurobonds, so post-admission Greek bonds looked much like the bonds issued by the sober and reliable German or Dutch governments. Greece naturally issued lots of eurobonds—for example, to build the stadiums, airports, and new hotels it needed to host the 2004 Olympics.

Greek bonds did carry a small interest premium, however, so they were devoured by European banks. Interest rates were scraping bottom throughout the world, and the small Greek premium, when multiplied by the thirty- or even forty-to-one leverage ratios favored by European banks, produced boffo profits. Bank lawyers somehow managed to remain oblivious to the very prominent provisions in the eurozone treaty stipulating that each country was responsible for paying back its own debt.

Had bankers had eyes for anything other than their own bonuses, they would have soon capped Greek debt issuance, for Greece was a subprime country if there ever was one—the equivalent of the one-room shack with a subprime mortgage in Orange, California. But, hey, this was the 2000s, the epoch of the “Great Moderation.” The world’s central bankers proclaimed that they had eliminated recessions. Trade was booming, high finance was a new Acropolis, bond buyers were high on the intoxicating gases of the Oracle at Delphi. Then the cold blast of the Great Recession whisked away the illusions, and the marble temples of investors’ imaginations were exposed as so many skid rows.

So, yes, the Greeks got into this mess with eyes wide open. But so did the rest of the eurozone and all the world’s international bankers. And the country that profited most from the indiscipline of the Greece was Germany, now the new Scourge of Profligacy.

INTERNATIONAL TRADE REQUIRES exchanging currencies. American purchases from China are made with yuan, not dollars, and vice-versa. (The actual exchanges are managed by banks.) Americans have long complained that the Chinese government represses the value of the yuan, instead of allowing free-market pricing to determine the yuan-dollar conversion rate. But China’s growth strategy required export surpluses to fund its development. An undervalued yuan made Chinese products look very cheap in terms of dollars, and made dollar-denominated products very expensive when priced in yuan. Presto, a big Chinese trade surplus with America.

When the single-currency eurozone was created, the value of the new euro was based on its average purchasing power throughout the currency zone. Greece and Germany were on opposite ends of that average. So Greece could borrow in euros and enjoy a currency that was grossly overvalued relative to its ability to pay. Germany, on the other hand, was gifted with one of the cheapest trading currencies in the world. Some recent estimates are that if Germans had stuck with the deutschemark instead of joining the eurozone, the price of German exports would now be 40 percent higher.

Predictably, German trade surpluses soared, with more than half earned from other eurozone countries. Germany retired a great deal of its old debt, balanced its budget, and at the same time kept investing in its export machine. After the 2008 crash, German trade within the eurozone dropped sharply, as doubts rose about the ability of the “PIIGS” (Portugal, Ireland, Italy, Greece, and Spain) to pay their bills. But Germany has diligently diversified its export markets, so exports still account for nearly half of German GDP. The German 2014 trade surplus was about 8 percent of GDP, one of the highest in the world. (China’s trade balance has recently been running at only about 2 percent of GDP.) The world’s most predatory trader is now Germany, both inside and outside the eurozone.

Although Germany’s lending within the eurozone has already generated huge trade flows and profits, it is insisting on punctilious repayment of every euro. That has put it at odds with the International Monetary Fund (IMF), which has participated in the previous bailouts. Christine Lagarde, the IMF’s boss, has been insisting that the Greeks need true debt relief, not just further loans. According to the IMF’s most recent analyses of Greece’s obligations, the Greeks would have to run a budget surplus, before interest payments, of 3.5 percent a year for “several decades,” and achieve the same productivity as Ireland and the same unemployment rate as Germany. Those are laughable objectives. Ireland is a young and technically sophisticated country, with the highest productivity in Europe. Germany is populated by Germans, who have a fondness for discipline. Greece is an aging third-world relic, culturally and economically closer to a Turkey than to a France or an Austria.

That events could come to such a pass is a telling commentary on the inadequacy of eurozone institutions. For example, any bailout of a member state, other than one caused by natural disaster, requires the unanimous consent of all the other member states. Finland has taken an even harder line than Germany, and may still insist on submitting any final Greek deal to its parliament for approval. Imagine if the Texas legislature had a veto over, say, federal aid to Detroit.

Greece, indeed, may be better off outside the eurozone, as the hard-line German finance minister, Wolfgang Schäuble, speculated a few weeks ago. The repeated imposition of austerity policies in Greece has generated a catastrophic collapse of GDP, a spike in what was already Europe’s highest unemployment rate, and a partial shutdown of banks. Greece’s recent referendum on accepting the eurozone’s financial requirements produced a resounding “Hell no!” But polls suggest that the Greeks really didn’t mean it—perhaps because they don’t trust their own politicians without the eurozone looking over their shoulders.

But the recent experiences of countries like Argentina suggest that default may be workable. The first step would be to repudiate all outside debt, and create a new internal currency that would have to be carefully controlled so as not to create runaway inflation. Elect a reform government that collects taxes and reduces spending. Get rid of all the rules that specify the size of a loaf of bread, and other petty bureaucracy. Over time, peg your new drachmas to the euro, pay your bills and balance your budgets, and your drachmas will gradually be recognized in trading for external essentials. Then start negotiating with external debtors for greatly reduced settlements of defaulted bonds.

That’s more or less what a number of Latin American countries did in the 1980s after defaulting on their trillions of 1970s petrodollar debts. Those were pretty irresponsible borrowers, but when total collapse hit, countries pulled up their socks, elected some responsible politicians, and stayed the course, although each had to pass through years of grinding poverty. It may have made a difference that the austerities were ones they imposed on themselves. Greece is a small country, but it is a prime tourist attraction, and has world-class specialty agricultural products—its olive oil, experts say, may be the best in the world.

All of that will take time, and it will be very painful. But it already is.