A Pair of Jazzman Biopics
By Richard Alleva
Movies 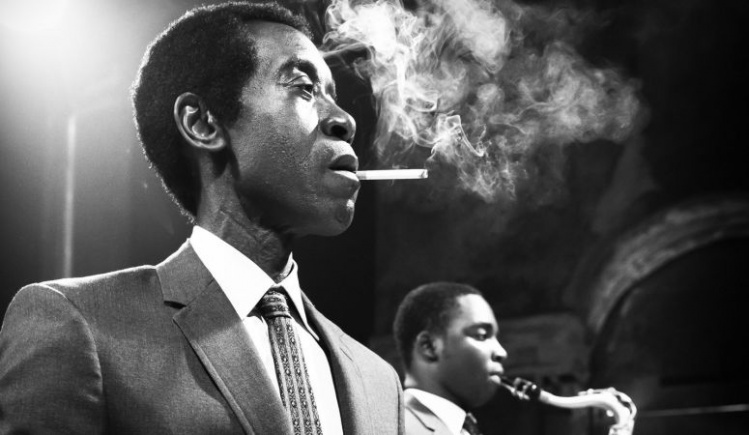 Miles Davis and Chet Baker: two trumpet-playing international stars of jazz (though Davis bridled at the word and preferred “social music”); both coming into prominence in the late 1940s bebop era but flourishing later with more melodic styles; both matinee-idol handsome in their youth and enjoying the favors of many women; both heroin addicts, with Davis finally shaking his addiction and Baker succumbing to it. And now each is the subject of an independently produced biopic taking its title from one of its hero’s hits: Born to Be Blue, written and directed by Robert Butreau, with Ethan Hawke as Baker; and Miles Ahead, written and directed by Don Cheadle, with Cheadle as Davis.

These movies even have similar narrative strategies. It’s Butreau’s conceit that in 1966 Chet Baker is playing himself in a low-budget biographical feature that will purportedly tell us about his early career and success. Similarly, Miles Ahead begins with Miles Davis being interviewed by a freelance journalist for Rolling Stone, and this launches us into flash-backs. Both Butreau and Cheadle opt for heavy fictionalization, Miles Ahead finally turning into a sort of gangster movie, while Born to Be Blue has Baker getting involved with the lead actress of the film he’s making. In fact, both film and actress are fabrications. (Baker did make a goofy Italian movie in the 1950s called “urlatori alla sbarra.” Scenes from this enjoyable folly appear under the end credits of Bruce Weber’s wonderful documentary about Baker, Let’s Get Lost.) Presumably, these inventions are meant to illuminate the inner natures of the jazzmen. How well do they succeed?

In the case of Born to Be Blue, not at all. The movie gets derailed in its first fifteen minutes when the movie-within-a-movie device is so hastily abandoned that I was left wondering why it was used in the first place. With it goes any attempt to show how the musician developed his idiosyncratic way with a trumpet and his even more peculiar way of singing, so memorably feminine but not in the least effeminate. But perhaps the script’s avoidance of all that is just as well since Ethan Hawke, doing his own vocals, completely fails to capture Baker’s unique timbre. (Oddly, Matt Damon gets it just right in The Talented Mr. Ripley, and he’s not even playing Chet!)

Beaten up by his drug dealers, Baker loses his embouchure—the lip formation that ensures consistent horn technique. (This actually happened.) Having fallen in love with Baker, the actress Jane Azuka sticks by him during his physical and artistic rehabilitation, which is always on the verge of being thwarted by his addiction to heroin. As in any remake of A Star Is Born, the long-suffering, constantly self-sacrificing woman represents Salvation, while addiction understandably represents Destruction and is the woman’s only real rival for her man. To see this handsome young couple strolling across lovely West Coast landscapes holding hands and exchanging endearments makes for pleasant, if banal, viewing, but such scenes completely falsify both the chaos and the heroic pertinacity of Chet Baker’s career. The fictitious Jane (touchingly played by Carmen Enjogo) may be intended as a composite of all the many women in Baker’s life but, when it comes to dealing with Baker’s affairs, numbers matter. We have to see him juggling many affairs simultaneously, because this man was faithful to nothing except music. If it weren’t for his contributions to jazz, he could be dismissed as nothing but a near-sociopathic conman and sexual manipulator. Why make a movie about what the French call a “sacred monster” if you’re going to eliminate both the sacred and the monstrous?

In the Weber documentary, we see the sexual and familial destruction left in Baker’s wake—the abandoned and often destitute wives and lovers, the children pleading for at least a visit. And the women are so different from one another, so strikingly individual in the way they respond to Weber’s questions, that it’s clear that making a composite of them to be played by one actress, even one as skillful as Enjogo, is misguided.

It’s in one of the documentary’s last scenes that we glimpse the heroic side of Baker. His once gorgeous face now as raddled as the picture of Dorian Gray, and his voice diminished though still compelling, Baker politely but firmly encourages a café crowd at the Cannes Film Festival to curtail their chatter out of respect for the song he’s about to sing. Respect for the song, mind you, not for himself. Then he plays and sings Elvis Costello’s “Almost Blue” and, whatever his vocal limitations, draws the hushed audience within an aural radiance.

The only memorable scene in Born to Be Blue shows Chet and Jane visiting his parents in Oklahoma. The mother is nervously welcoming but the father, a failed musician whose envy of his son’s success is disguised even to himself by self-righteous disapproval, can only greet the now disabled Chet with the taunting offer that the gas station down the road is hiring. Only in this scene does Butreau’s writing contain some insight into what made Chet Baker so self-destructive, and, as Chet’s father, the actor Stephen McHattie etches this smarmy, hayseed Cronus into our memories without resorting to melodrama.

The narrative flaws of Born to Be Blue are compounded by the casting of Ethan Hawke. This actor has proved himself in movies such as Childhood and Training Day, but his specialty is the portrayal of normal men challenged by abnormal circumstances. There was nothing normal about the man he’s playing here, and Hawke is unable to capture Baker’s self-centered, cobra-like intensity. The real Chet Baker was appalling and magnetic. This movie’s version is amiable and dull.

MILES AHEAD, THOUGH riddled with flaws, is well worth seeing because it possesses the one big virtue lacking in Blue: you can believe that the music you’re hearing on the soundtrack was created by the man you’re watching onscreen. Whatever his shortcomings as writer-director, Don Cheadle as actor is at the center of the story—and the center holds. Whenever his Miles Davis walks into a room, he acts as if he owns the place and everyone else is there by his sufferance. This characterization reminded me of Jean Cocteau’s description of Orson Welles as “a solitude surrounded by a crowd,” and it’s in line with what Lena Horne once said: “Miles is a potentate. He’s also a puritan, and the combination can be pretty sadistic.” The imperiousness, confidence, cruelty, and inner solitude are all there in Cheadle’s panther-like tread, his menacing and yearning stares, his opaque silences, and in the almost scientific thoroughness with which he plots out his music with his band. (That Cheadle also gets down pat Davis’s famously raspy Prince of Darkness voice goes without saying.) This convincing embodiment of Davis as a shape-shifter—dreamer, lover, craftsman, churl—is much more interesting than the fictional story in which Cheadle the writer-director has embedded him, but Cheadle the actor almost succeeds in making the film’s melodrama work.

A sleazy but resourceful (and entirely fictitious) journalist played by Ewan McGregor wants to interview the mysteriously secluded Davis sometime in the mid-1960s and succeeds in securing his attention with a supply of cocaine. But the interviewee then involves the interviewer in a quest for some tapes stolen from him by a thuggish music agent. As the quest unfolds, various incidents remind Miles of turning points in his life to which we become privy in flashbacks: his enchantment with the gorgeous dancer Frances Taylor (Emayatsky Connealdi), who becomes his second wife (all the other wives are missing from the movie); the collapse of the marriage because of his drug-induced paranoia and his insistence that she give up her art; his brushes with the law; his work with a select and racially integrated group of musicians whose talents he harnesses to produce the intimate sound (“modal jazz”) he wants to hear. My major complaint about the movie is that, as it sinks deeper into the gangster-movie scenario, climaxing in high-speed car chases and a highly improbable and clumsily staged shoot-out at a boxing match, less and less attention gets paid to Miles Davis the artist.

Nevertheless, the film has its moments, not valuable as sheer biography but as slices of a peculiar personality: Davis warning off a too-eager German fan with, “Get the fuck off me, Hitler!”; his sudden compassion for the hitherto despised journalist when he hears of the latter’s marital troubles; the way Davis, as he plays in a jazz club, narrows his focus on the attending Frances until he (and the camera) literally can’t see anyone but her in the audience. That this movie works so brilliantly in starts and fits yet flounders so badly as a whole might amuse Miles Davis himself if he could watch it from his bandstand in heaven (or is it in the other place?). He would see that he’s remembered, mimicked, and larger than life on the big screen, but that nobody seems able to sum him up. Would this make him laugh, or would he just shrug his shoulders and mutter, “So what”?

Published in the May 20, 2016 issue:
View Contents
Tags
Movies