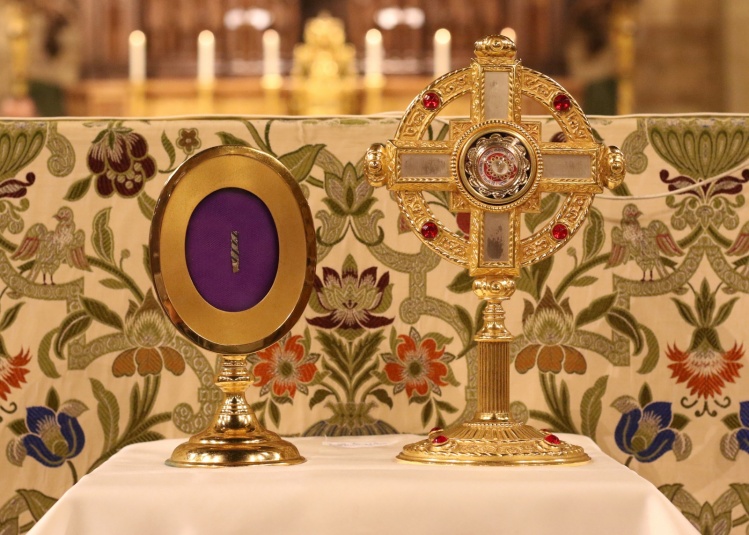 Reliquaries containing relics of Sts. Jacinta Marto, left, and John Paul II are displayed in front of the altar prior to a vigil Mass. (CNS photo/Gregory A. Shemitz)

It isn’t often, at least in my experience, that one gets to attend a Mass where desiccated body parts are tastefully displayed on the altar. Yet that is what happened on the Sunday after Easter at the church where I now go to Mass. At first, I was under the impression that the pastor had placed two bronze monstrances at either end of the altar. This would not have surprised me, because he is a middle-aged man of traditional and obviously sincere piety. There is also, I suspect, a certain ideological conservatism at work in his approach to liturgy. He makes a point of adding “Pope Emeritus Benedict XVI” to part of the Eucharistic Prayer where the celebrant mentions the pope and the local bishop. Benedict XVI is an impressive figure in many ways, but whatever the pastor’s intention might be, the effect is to suggest that we have two popes, not one.

As it turned out, the bronze crucifixes were not monstrances, but reliquaries. In my experience, reliquaries rarely make an appearance in suburban American churches, but in this instance they appear to be permanent additions to the sanctuary. Eventually we were informed that one contained bone particles of the French priest St. Peter Julian Eymard, founder of the Servants of the Blessed Sacrament, and that the other contained bone particles of the Lebanese monk St. Charbel Makhlouf.

The cult of saints and the veneration of relics played no part in my suburban Catholic upbringing, but I have no objection to such venerable religious practices. In fact, despite the jarring impression such rituals make on the “enlightened,” in many ways I find such symbolic actions to be impressive invocations of reverence and spiritual longing. In Italy years ago, I visited a church where a bishop’s corpse, dressed in his miter and robes, was carefully preserved in a glass coffin built into the altar. It was macabre but thought-provoking for someone steeped in an American culture that is determined to ignore the inevitability of death and to banish the bodies of the dead from sight and mind. Historically, of course, altars often held the relics of saints. For much of its early history, the historian Peter Brown reminds us, “Christianity, as it impinged on the outside world, was shrines and relics.”

Ritual should change our perceptions of reality, and make visible, even tangible, what is otherwise hidden.
sharetweet

How and where relics are displayed makes a difference, of course. I found the sudden and unexplained appearance of the reliquaries on the altar to be a misplaced opportunity. Aidan Kavanagh, OSB, who taught me liturgy, insisted the altar be “kept free of contraptions such as elaborate bookstands, pots, cruets, plastic things, electrical apparatus, aids to piety, and the efforts of floral decorations. The book of the Word and the sacrament of the Word are adornment enough.” The altar and the baptismal font should be the focal points of the liturgy. That sounds orthodox to me. Reliquaries have their place, but it is not on the altar during Mass. That is a distraction, not an aid to piety.

I also wonder what my fellow Mass-goers make of the “presence” of Peter Julian Eymard and Charbel Makhlouf on the altar. Reverence for the relic of a saint is traditionally understood to make real and palpable the presence of such “invisible friends.” I suspect that, like most well-educated American Catholics, my fellow parishioners regard the veneration of relics as an incomprehensible superstition left over from the church’s less enlightened past. I understand that skepticism. How does one make sense of the stories of cures and other miracles the church attributes to saints? One of the claims for Charbel Makhlouf’s sanctity, for instance, concerns a “dazzlingly bright light” that emanated from his tomb for forty-five nights after his burial. Needless to say, I have never observed anything like that. Then again, what we perceive and what we believe to be real, especially about social relationships, can vary dramatically from culture to culture and religion to religion.

Anthropologists have shown that what may appear to be irrational actions and false apprehensions in so-called “primitive cultures” can be richly evocative symbolic interactions, rituals used to negotiate social transgressions or alienation and renew or broaden a group’s sense of solidarity. Catholics should be wary of the popular modern rejection of traditional ritual as nothing more than “hocus pocus.” In his book The Cult of the Saints: Its Rise and Function in Latin Christianity, Peter Brown showed that the pilgrimages, rites, and exorcisms enacted in the veneration of relics in early Christianity transformed an entire culture, supplanting paganism’s distant and indifferent gods and its worship of nature with a cosmology that changed the relationship between man and nature by placing human beings and “human time, linked to the deaths of outstanding individuals” at the center of the universe. The presence of Christianity’s invisible friends in the shrines of the martyrs enabled Christians “to seek the face of a fellow human being where an earlier generation had wished to see the simmering presence of a bodiless power,” Brown writes. He explains how the cult of saints breached the “ancient barrier between Heaven and Earth.” In the dramatic ritualized readings of the martyr’s passion, even time was abolished by bringing the past into the present. The revolution Christianity wrought turned the heavens of the pagan world into a place where personal relationships—not the intimidating silence of the cosmos—were the ultimate reality.

Since Edward Gibbon wrote The History of the Decline and Fall of the Roman Empire, historians tended to understand the cult of saints and the veneration of relics as an eruption of crude popular religion from below. Brown argued that the cult, which Catholic bishops embraced, was quite the opposite—an expression of the most sophisticated spiritual aspirations and a ritual practice of remarkable power and imaginative beauty. The Incarnation had turned the relationship between the stars and the earth, the divine and the human, on its head. “God became human,” said Athanasius, bishop of Alexandria, “so that humans can become divine.” Thanks to their relics, the saints, having followed Jesus to their deaths, provided access to the divine and a glimpse of the afterlife. It was a humanizing vision, not a superstitious one.

Ritual should change our perceptions of reality, and make visible, even tangible, what is otherwise hidden. Bread and wine, a lock of hair, or a piece of bone—these are all things we can see and touch. The veneration of relics is a hard thing for many Catholics of this time and culture to wrap their minds around. It’s certainly difficult for me. But I suspect that skepticism is a constriction of our sense of possibility, not an expansion. I, for one, prefer the presence of invisible friends to that of a bodiless and impersonal power. 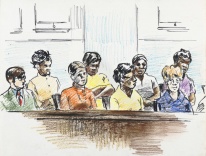