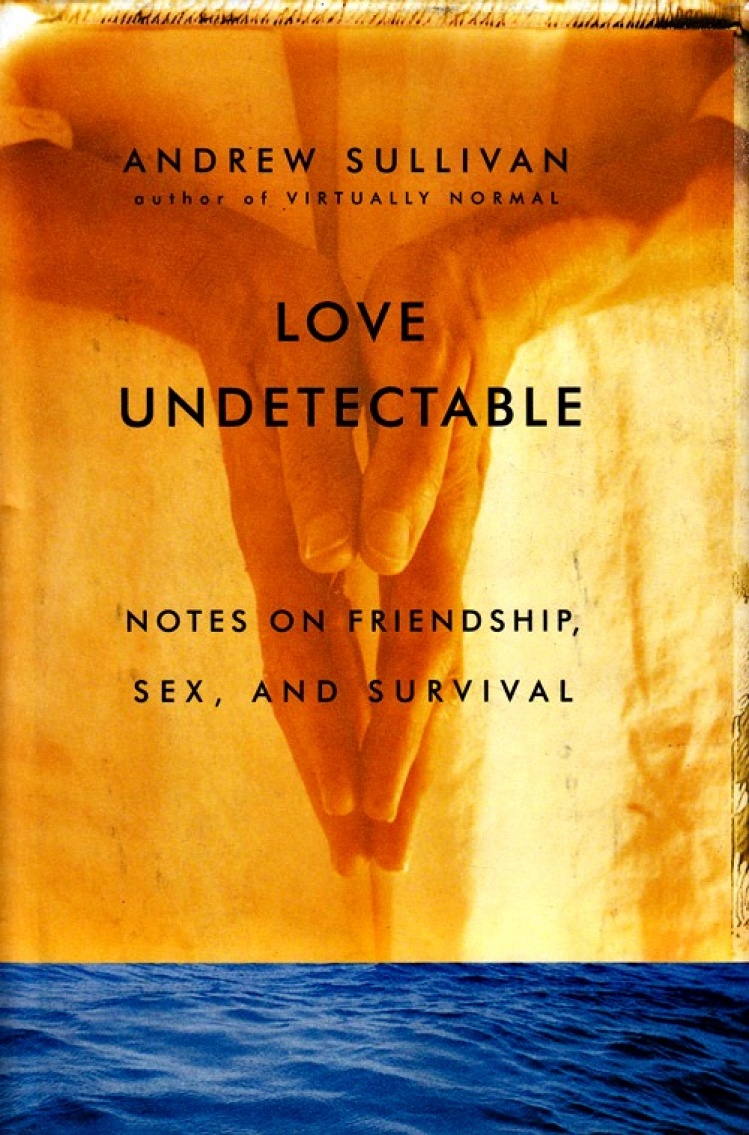 In his preface, former New Republic editor Andrew Sullivan says that he had intended to write  a  book about friendship. Distracted from that task by the death (from AIDS) of a close friend, he turned instead to write the essay "When Plagues End." Returning to the subject of friendship (in the essay in this volume titled "If Love Were All"), he decided that both of these essays were "different answers to the same questions, different responses to the same period in my life, different parts, I hope, of the same book." The third essay in this book, "Virtually Abnormal," is a sustained examination of psychological debates about the origins of homosexuality.

I confess that I cannot find many connections among the essays, other than that all three take up questions important to the author's own sense of himself. Unless we are especially interested in that, however, we are probably better off simply taking the essays as three quite separate pieces. Indeed, the one that makes the fewest references to Sullivan's own life and identity—'Virtually Abnormal"—is surely the most tightly argued of the three. It examines Freud's views on the origins of homosexuality and turns, then, to more recent theorists—both reparative theorists and defenders of the "normality" of homosexuality. What is never quite clear, even at the end of the essay, is what readers—or the author himself—should conclude from the evidence he discusses and the arguments he dissects. He summarizes the long course of the argument in this way: "Homosexuality is not, in the usual sense of the word, normal. But nor is it, from a psychoanalytic context, necessarily abnormal. It is different." None of this, however, gets us to a moral judgment—as Sullivan himself realizes in his clearer moments. He does, though, outline the two most important moral issues to be considered when evaluating homosexual relationships: the lack of "an intrinsic ability to create new life within that relationship," and the lack of "true gender complementarity" or otherness in such a bond.

These features suggest to Sullivan that narcissism and promiscuity are likely to be permanent features of gay culture, and in this book, despite his status as a strong proponent of "gay marriage" (see Sullivan's Virtually Normal), he seems strangely at ease with that conclusion. At some points, indeed, he attempts to make a virtue of these limitations. Thus, for example, he argues that "precisely because such a same-sex relationship cannot in itself create new life, it is more pellucidly entered into for its own sake." One wonders whether this is really a good thing, a question to which I return below.

"When Plagues End" is in part the story of the death of a friend, and in part reflection upon the significance—psychological and otherwise—of the fact that it is now reasonable to think of "surviving" AIDS. Sullivan explicitly recognizes that AIDS has not really been a plague in the normal sense; yet his discussion does not seem to assimilate that acknowledgment. This essay also contains the book's most sustained analysis of and response to the fact that Sullivan's own faith community—Roman Catholicism—condemns homosexual conduct. His response, at least in my view, is one of the most disappointingly weak elements of the book. Having acknowledged that his own HIV infection might have come from any one of many sexual partners, having argued that "gay marriage" would be a better way of channeling desire, he can still defend his refusal to give up promiscuous activity as "an act, at some level, of integrity. It was simply not possible for me to change my entire makeup...."

Hence, a religious ethic that calls for abstinence outside marriage requires "the arid emptiness of complete self-denial, which is to say, to end one's life altogether." Evidently Sullivan must think that this is also what the church has asked of unmarried heterosexuals—not faithful obedience to the ordinance of God, but a loss of integrity and end to meaningful life. Thus, he can describe his own view, which holds that sex is most humane when expressed in faithful love but also permissible in other contexts as a more "nuanced" and less simplistic ethic than that which the church has taught—a claim that sounds more condescending than persuasive.

"If Love Were All" is the essay that would have become a larger book about friendship according to Sullivan's original design. It discusses, in varying degrees of detail, many of the important writings on friendship; yet, many of the judgments Sullivan offers about this diffuse body of writing seem to me either imprecise or just mistaken. Thus, for example, he describes Montaigne's famous essay as the "first and last serious treatment" of friendship in the modern world. He is right, of course, to make the general point that friendship received more attention in the classical world, but that judgment overlooks writers as diverse as Jeremy Taylor, Emerson, Simone Weil, and C.S. Lewis. Taylor's A Discourse of Friendship is at least as serious a treatment as Montaigne's—and far more carefully argued.

Having described Montaigne's as the "deepest" essay on friendship, he later distinguishes (romantic) love from friendship by suggesting that "love is sudden, [but] friendship is steady." We fall in love, but not into friendship. Yet, of course, all readers of Montaigne's essay know that he says of his friendship with Etienne that "at our first meeting... we found ourselves so taken with each other...that from that time on nothing was so close to us as each other." Sullivan also suggests that friendship, again in contrast to love, permits "a space that allowed the other person to remain safely another person." Montaigne, by contrast, writes that "in the friendship I speak of, our souls mingle and blend with each other so completely that they efface the seam that joined them, and cannot find it again." Now, of course, on any or all of these matters Sullivan's views may be correct, but they do not, without considerably more argument, flow very naturally out of Montaigne's essay.

Sullivan seems to regard it as one of the strengths of Aristotle's view that "friendship is impossible without self-love." But it may be more reasonable to see in this—if it really is Aristotle's view—the chief problem his thought on friendship never overcomes. Moreover, the classical notion of the friend as "another self" may, in fact, cut against Sullivan's claim that one must first love oneself in order to be capable of friendship. We need the friend as "another self" so that we may come to know who we really are. Hence, an attempt first to know or love oneself, to suppose that I must first be a person capable of friendship, may be self-defeating. Something must first be risked in friendship if we are ever really to become "selves" capable of sustaining deep personal bonds.

Sullivan's high regard for Montaigne's essay is grounded chiefly, I think, in the fact that Montaigne so clearly exalts friendship above familial and romantic love. Romantic and sexual love are inferior to the union of souls in friendship because "bodies cannot, strictly speaking, unite." I do not know what "strictly speaking" means here. We need an argument to show how souls, "strictly speaking," can unite. But some bodies do seem more suited to unite than others, and Sullivan's claim simply overlooks that fact. He dislikes the neediness implied in the surrender of self that romantic love involves (though, as I noted above, he may be mistaken to suppose that friendship does not also call for such self-surrender). He dislikes the neediness of loves grounded in biological urges or necessities--in our embodied condition. That this embodied condition might lead us to marry, at least in part, for the sake of children, is to him a sign of deficiency in sexual and familial love. Like Montaigne, he believes that familial love is inferior to friendship because it is unchosen.

One might usefully contrast Sullivan's treatment of friendship with that of Lewis in The Four Loves. For Lewis each of the natural loves provides an image of something that must be present in caritas, in love that is everything it should be. And each of the natural loves, isolated from caritas, must go wrong and fall short. By contrast, Sullivan simply pits the various natural loves against each other, giving first prize to friendship, and he thereby misses important aspects of human love at its best. In short, readers in search of a nuanced mode of entry into the literature of friendship should not regard this essay as an entirely reliable guide, though they may find other reasons to read one or more of the essays in this book.

Gilbert Meilaender is a Senior Research Professor at Valparaiso University and the Ramsey Fellow at the Notre Dame Center for Ethics and Culture.