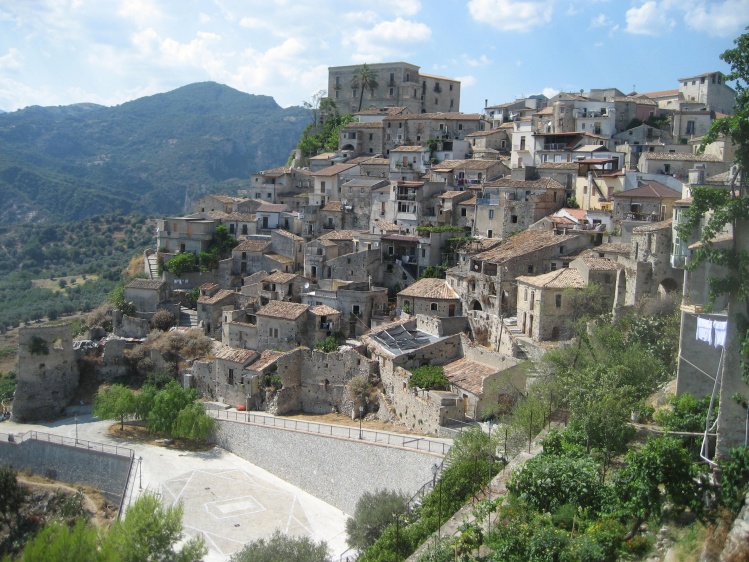 The room my wife and I were led to on the first evening of our Sicilian honeymoon had a warped linoleum floor, a sway-backed bed, and a cracked plastic chair in the corner. The shower curtain was torn and mildewed; ants crawled on the melting lump of soap. Outside the single window, down in the alley, a kitchen worker poured another bucket of scraps onto the moldering heap of clam shells and cantaloupe rinds. We checked out before we could fully check in, explaining that this was not what the brochure had promised. The desk clerk shrugged, conceding nothing, but asked if we’d stay for something to eat. We were treated to fresh linguine pesto served in hand-painted bowls on a shady stone terrace scented by orange and lemon blossoms, the Mediterranean glittering nearby, Monte Pellegrino golden in the distance.

From the “disgusting & odious” to the “sublime and lovely,” to paraphrase Shelley, whose formulation the “two Italies” Joseph Luzzi uses for the title of his memoir. Part personal and cultural history, part scholarly reflection, this brief but expansive book documents Luzzi’s attempts to reconcile the conflicting experiences of his own, hyphen-less Italian American upbringing, along with his investigation into the split nature of Italy itself: How can a civilization that produced Michelangelo and Verdi and Fellini also have spawned the Mafia, Mussolini, and Silvio Berlusconi? How can the corrupt and the beautiful reside so closely?

Luzzi approaches the question from an interesting position. He is not of the huge second generation born to the huddled masses associated with late-nineteenth- and early-twentieth-century immigration, but rather came of age in 1970s and ’80s Rhode Island, the only American-born child in a large family recently arrived from the impoverished region of Calabria. This accident of origin is fodder for some of the numerous “two Italy” pairings Luzzi (now a professor at Bard College) will write about. He is a modern American boy with parents who barely speak English and still slaughter their own rabbits and goats for dinner. But he’s also out of step with his contemporaries-in-heritage, the third- and fourth-generation Italian Americans whose fullest expression of ethnicity is realized in chicken parmigiana, The Godfather—the movie, not the novel—The Sopranos, and the reality TV show Jersey Shore. Not only does he aspire to artistic pursuits and an advanced liberal-arts education, he’s also keenly aware of the distance these may put between himself and his past, and between himself and his family—the male members of which are mainly physical laborers. (At one point, the men gather tribunal-style to decide on appropriate punishment for an adulterous wife.)

Some of his anecdotes will feel familiar to any Italian American who remembers a grandfather diligently wrapping his fig tree in burlap for the winter or a black-clad nona making devotions to the parish’s patron saint. Yet Luzzi’s memories are not from decades long gone but from the relatively recent past. And though Luzzi (rightly, in my opinion) bemoans the unwillingness of his fellow Italian Americans to engage with different expressions of their culture—indeed, why aren’t more of us reading the novels of John Fante or Pietro di Donato’s immigration-era Christ in Concrete than reciting lines from Goodfellas?—it feels as if he punts instead of offering an explanation for it:

The Godfather and The Sopranos offer an American morality play of upward mobility through the acquisition of power, money, and prestige. Where else might Italian Americans turn for their master narrative...? I don’t think that the great Italian American book or film will ever be created. Such a story would require a powerful organizing myth. We Italian Americans commemorate our past only to remind ourselves of how far we have traveled from it. Our pride in our ancestors grows with the distance we set between them and ourselves.

But if a punt, it’s a good tactical move that positions Luzzi for the strongest part of his memoir—the more compelling material on Italy itself. Or make that “the Italies themselves.” Luzzi, through numerous, almost compulsive visits to the Old Country, seeks to bridge some of that distance “we set between them and ourselves,” even while positing theories for Italy’s vexing dichotomies. A number of these are discussed: Is it the relative youth of a country (Italy was unified only in 1861) built out of a disparate and fractious collection of regions and city-states? Is it the questione della lingua—the “momentous” problem of language where regional dialects still hold sway over the “official” Tuscan that Dante and Boccaccio composed in? Or is it the unhelpful enshrinement of abstractions like bella figura (the importance of creating a fine impression above all) and sprezzatura (studied nonchalance) as collective virtues? Perhaps it’s all of the above, and at the same time (this being Italy), none.

Along the way, Luzzi contrasts the beauty and art of Florence with the gaucheness and verve of Naples and the stubborn poverty and harsh terrain of the mezzogiorno, including his ancestral Calabrian village, still home to numerous relatives. And he’s not shy about the conflicted responses such differences evoke in him, which makes for affecting and at times touching writing—especially in passages on how the sudden death of his wife unpredictably shapes his assessments. He also bolsters these sections with reporting, on such uniquely Italian cultural phenomena as the mammoni (“mama’s boys,” adult men still living at home with their mothers); on the bureaucratic red tape that can make even the purchase of a stamp a hellish experience; on the country’s occasional escape from political and economic dysfunction (such as 1987’s il sorpasso, “the overtaking” of Britain by Italy as the world’s fifth-largest economy) and its seemingly inevitable decline as signaled today by brain-drain, falling birthrates, and the recent return to recession.

Yet visitors still reliably flock to the Duomo and the Colosseum. Luzzi ultimately resists crafting a simple, single explanation for the challenge that is Italy—but he quotes a thought-provoking passage from Lampedusa’s The Leopard: “[The visiting British officers] were ecstatic about the view, the light; they confessed though, that they had been horrified at the squalor and filth of the streets around. I didn’t explain to them that one thing was derived from the other.” When symptoms are causes and causes are symptoms, maybe there’s little point in explaining. To use a versatile phrase bequeathed by the paesani to American English: Whaddya gonna do? Of course, as our old relatives will tell you, it sounds much nicer in Italian.