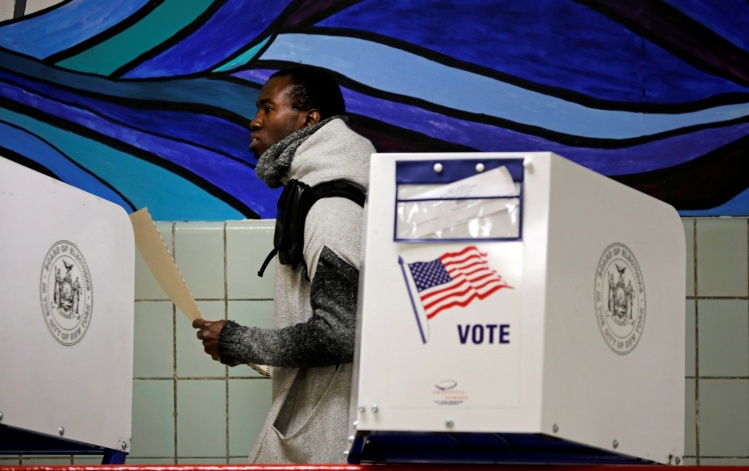 A voter carries his ballot behind a voting booth at a polling station in the Bronx section of New York City during the 2016 U.S. presidential election. (CNS photo/Saul Martinez, Reuters)

Let’s posit three rules of political analysis. First, data are better than presuppositions. Second, actual votes cast can tell us more than the polls. Third, even when we carefully examine the facts, we’re all vulnerable to seeking confirmation of what we believed in the first place.

On the basis of these rules, some widely accepted assumptions about our political moment can be seen as, at best, incomplete.

Democrats, it’s often said, are so obsessed with President Trump and the Russia scandal that they talk of nothing else. But anyone who spent Tuesday listening to a regiment of potential 2020 Democratic presidential candidates present their case at the liberal Center for American Progress’ Ideas Conference can testify that this is simply untrue.

Attacks on Trump were far less prominent than promises related to economic justice and warnings about the ways in which the United States is falling behind other parts of the world. When Trump did come under fire, it was usually on health care, his lopsided tax cut for corporations, or administration corruption outside the context of the Russia inquiry.

If you want to argue that the holy grail of “a persuasive and unified Democratic message” has yet to be discovered, well, sure. Still, you could hear behind many of Tuesday's speeches echoes of John F. Kennedy's 1960 slogan, “Let's get America moving again.” The idea was that Trump and the GOP are ignoring the problems most voters care about, or are making them worse.

And as The Washington Post’s liberal blogger Greg Sargent has insisted, anyone who explores what Democratic candidates on the ground are campaigning on will notice how much they're emphasizing bread-and-butter concerns.

Attacks on Trump were far less prominent than promises related to economic justice and warnings about the ways in which the United States is falling behind other parts of the world.
sharetweet

Candidates—on the whole, anyway—aren’t stupid. They look at surveys such as the Kaiser Health Tracking Poll last week, which reported that the top three issues on voters’ minds in battleground states and districts are gun policy (23 percent), the economy and jobs (20 percent) and health care (also 20 percent). Politicians who want to win act accordingly.

And Democrats recognize that the relentless focus of the news media on the Russia scandal (and Trump's own Twitter feed) will do a lot of the work of rousing their base in outrage.

Which leads to the need to qualify another popular assertion: that there has been an uptick in Trump’s popularity. There is truth here. His approval rating is up about 5 points in the RealClearPolitics averages from six months ago—but as of Wednesday afternoon, it still stood at an anemic 43.2 percent.

And what’s unchanged is the fact, as David Byler wrote earlier this spring in The Weekly Standard, that “Americans who don't like Trump really don’t like him.” Those who strongly disapprove of Trump’s performance significantly outnumber those who strongly approve.

For example, The Economist/YouGov May 14-15 poll had a relatively close split on Trump’s job rating (42 percent approved, 50 percent disapproved). But even in this survey, strong disapprovers outnumbered strong approvers, 39 percent to 25 percent. This will affect turnout to the Democrats’ advantage this fall.

But how much? We don’t know yet­—the hardest thing to say in political punditry. The special elections held since Trump took office point to the strong possibility of a Democratic “blue wave” in November, but it is far from a certainty.

Turnout in Tuesday’s Pennsylvania primaries tilted Democratic, a good sign for the party, but it’s also true that registered Democrats substantially outnumber registered Republicans in the state. In Ohio’s May 8 primaries, on the other hand, Republicans outnumbered Democrats, although the GOP had a large registration advantage going in and Democrats could thus claim to have performed relatively well.

The two big swing-state primaries suggest that while the Democrats enjoy an advantage this year, its size is still very much in question.

Wednesday’s bipartisan conclusion of the Senate Intelligence Committee that Russia intervened in the 2016 election to help Trump and hurt Hillary Clinton will complicate the political lives of the president and his die-hard Republican supporters—and keep the Russia story at the center of the news.

But understanding 2018 requires accepting that the news cycle is not the same as the campaign cycle and that all elections involve a mix of mobilization and persuasion. The intense dislike of Trump means that mobilization will play an especially large role this year. But few Democrats—in swing areas and among would-be presidents—are counting on animosity to the president to do all their work for them.