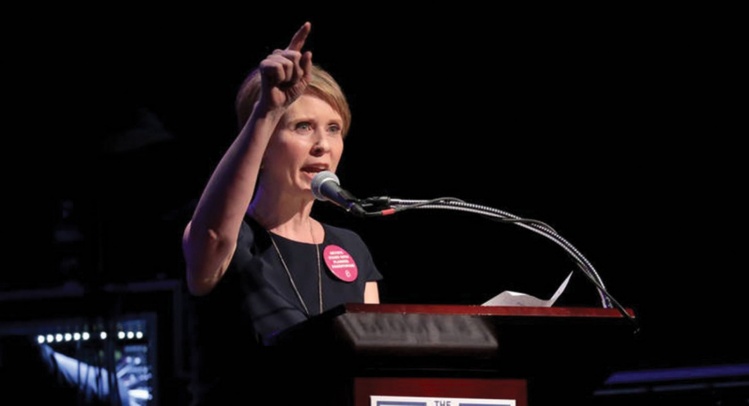 Photo from 2018 Cynthia for New York

This spring, Cynthia Nixon, the actress most familiar to fans for her role as Miranda on HBO’s Sex and the City, announced a Democratic primary challenge to New York’s powerful incumbent governor, Andrew Cuomo. Nixon has no experience in government and few of the qualifications generally associated with running for elected office, though she has been a vocal activist for public schooling in New York City, where she lives. She’s also a prominent supporter of the city’s self-styled progressive mayor, Bill de Blasio, which has led to speculation that he put her up for the job; the mayor and the governor, nominal allies and one-time friends, have for several years been mired in a petty and petulant feud, the roots of which no one can quite seem to get at. The emerging contest has some hallmarks of a typical New York battle—sharp-elbowed, personal, and parochial—yet it has national implications, and not merely because both candidates are obligated to denounce Donald Trump.

For one thing, Cuomo, vying for his third term as governor, is expected to run for the Democratic presidential nomination two years from now. He has spent many years assiduously amassing political power and has the support of Queens Congressman Joseph Crowley, the current chairman of the House Democratic Caucus, who quite possibly could leapfrog Nancy Pelosi to become speaker should Democrats flip the House this fall. As for Nixon, she’s running an anti-party-establishment campaign, an outsider articulating the frustrations of “true” progressive Democrats who feel betrayed by a sullied insider making shady, mutually beneficial deals with Republicans. Cuomo maintains a high favorability rating among all voters, but Nixon polls well among liberals and  Democrats under the age of fifty. Were she somehow to upset Cuomo in this September’s primary, it could be seen as validation of a strategy the restless progressive grassroots has been clamoring to take nationwide. (Though see Ohio, where Dennis Kucinich—proudly brandishing his “F” rating from the NRA—lost to former Director of the Consumer Financial Protection Bureau Richard Cordray—endorsed by Elizabeth Warren—in May’s “true-blue” primary contest for the Democratic gubernatorial nomination.)

Nixon’s announcement of her candidacy drew condescending ridicule from Cuomo, who has since appeared rattled and defensive, and at times indignant at the temerity of his challenger. Nixon seems able to rile the governor, though that may say less about the sharpness of her tongue than the notorious thinness of his skin; he showed similar discomfiture four years ago when challenged from the left by liberal law professor Zephyr Teachout. As a campaigner, Nixon has at times exhibited shaky command of policy and confusion about New York’s complex mechanisms of finance and funding. But she is comfortable before an audience, issuing reliably energizing salvos—He’s a bully! He’s power-hungry!—along with soothing expressions of empathic progressivism. This has sufficed for the mostly like-minded audiences she has drawn in her mostly New York City–limited appearances. Her first major proposal was for legalization of marijuana, the justification being that, if white people have been getting away with using it for years, why shouldn’t black people? There’s good reason to look at pot legalization, and an ever-urgent need to address racial disparities in the justice system. But in welding the two issues she weakened her argument on both ends. A curious voter might ask: Why not enforce existing marijuana laws equally, across the board, regardless of race, income, and zip code? A skeptical one might think: virtue signaling.

Why not enforce existing marijuana laws equally, across the board, regardless of race, income, and zip code? A skeptical one might think: virtue signaling.
sharetweet

Yet soon after Nixon promised to legalize pot, Cuomo did too, and with the powers of his position has all but seized the issue from her, along with others—from equal pay for women to ending cash bail for misdemeanor offenders. He is almost uniquely adept in the dark arts of politics: preserving power, wielding influence, making deals, and stealing the march. He also has managed to distance himself from numerous allegations of corruption, mainly tied to “pay-to-play” deals and business- and residential-development projects involving underlings and allies; one of his closest associates was recently convicted for felony bribery and wire fraud. In 2014 Cuomo shut down a commission investigating corruption in the statehouse in Albany, just as it appeared to be closing in on him. One New York pundit harps on what he sees as Cuomo’s monarchical tendencies by referring to him as “Andrew, King Cuomo the Second, son of Mario, King Cuomo the First.”

The fact of this lineage can be a source of wistful disappointment for New Yorkers who recall the elder Cuomo as a thoughtful, eloquent statesman, and still thrill to the remembered cadences of his keynote speech at the 1984 Democratic National Convention. Cuomo the younger was educated by Jesuits at Fordham University, though you might not know it from his mode of public discourse. He threatens, belittles, brags, and preens. His efforts at oratory come off as bombast. He doesn’t do much in the way of debate, or of written opinion—though it’s hard to imagine any politician now, say, maintaining a running dialogue with readers and editors in the pages of Commonweal, as his father did in the 1980s and ’90s. Comparing Andrew with Mario might seem unfair, except that the son invokes the father’s memory so often, and often mawkishly.

At a late-April event in Brooklyn (where else?), Nixon was well received by an expectant audience clearly hoping for a giant-slayer. She stuck close to her script, and it was, for the most part, a good script. The city’s transit system is a shambles, its housing costs are stratospheric. Its policing and criminal-justice system is not exactly race-blind, and its rich-poor divide is yawningly wide. Tens of thousands of public-housing residents, victims of municipal and federal neglect after Hurricane Sandy, live in dangerous conditions, while the public-school system is now the most segregated big-city system in the country. But all of these are New York City issues, and Nixon couldn’t quite seem to widen the focus in a way that would include the other 11 million people across the state.

Nixon would be the first to admit she’s a neophyte. “You don’t need experience to run for governor,” she said, reminding her Brooklyn audience that Cuomo had no experience in elected office when he first ran (and lost). Being new to the game is hard enough, but she has compounded the neophyte’s challenge by stressing her ideological contrast to Cuomo. As Matt Grossmann and David A. Hopkins noted in the New York Times last month, contentious debate over ideological fidelity is an approach more naturally suited to Republicans, whose purity tests function to amplify and reinforce “symbolic conservative predispositions.” Contests among Democrats tend to “produce arguments about who will do a better job addressing the real-world priorities of key constituencies as well as competition to secure endorsements from party-aligned interest groups.” Thus Nixon’s appeal, they conclude, is “unlikely to persuade the state’s Democratic electorate to abandon the sitting governor.... She will need to convince party-aligned groups not only that she is more sympathetic to their concerns but also that she is well equipped to work the levers of government to deliver concrete policy achievements.” Nixon is gamely attending to the first but meeting with only modest success, while on the second she is at a distinct disadvantage. This may sound like bad news for the leftier precincts of the party, which have had quite enough of what they see as Cuomo’s centrist accommodation. But really it’s not great news for anyone—centrist, moderate, progressive—troubled by a candidate whose accomplishments seem purely transactional and ethically questionable, and who seems motivated by little but ambition. Even when acknowledging the need for the capable management of interests, the complexities of policymaking, and the limits of idealism, it nonetheless helps to be inspired. Settling is never satisfying, but to have to do so feels particularly galling now, when the moment demands so much more.

Would it kill you to read a book?