On Becoming a Catholic 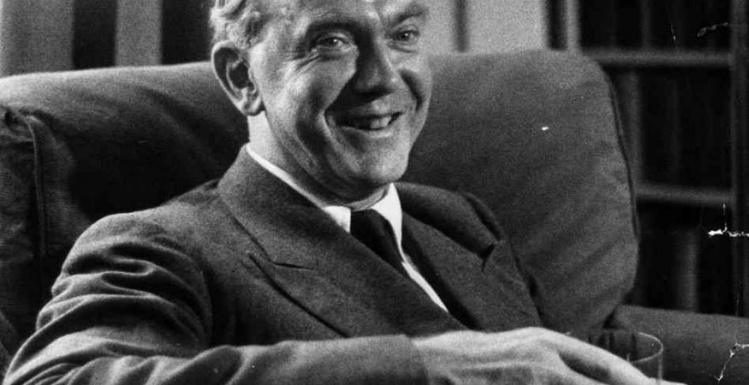 Vivien was a Roman Catholic, but to me religion went no deeper than the sentimental hymns in the school chapel. "Lord Dismiss Us with Thy Blessing" represented the occasional mercy of God, and I enjoyed the luxurious melancholy of "Abide with Me." The only prize I had ever won at school was a special prize for an "imaginative composition," given by an elderly master in memory of his son killed in the first World War. It was the first time the prize had been awarded, and being a deeply religious man he was grieved that it should go to a story about an old senile Jehovah who had been left alone in a deserted heaven.

I met the girl I was to marry after finding a note from her at the porter's lodge in Balliol protesting against my inaccuracy in writing, during the course of a film review, of the "worship" Roman Catholics gave to the Virgin Mary, when I should have used the term "hyperdulia." I was interested that anyone took these subtle distinctions of an unbelievable theology seriously, and we became acquainted. Now it occurred to me, during the long empty mornings, that if I were to marry a Catholic I ought at least to learn the nature and limits of the beliefs she held. It was only fair, since she knew what I believed—in nothing supernatural. Besides, I thought, it would kill the time.

One day I took Paddy for a walk to the sooty neo-Gothic Cathedral it possessed for me a certain gloomy power because it represented the inconceivable and the incredible. There was a wooden box for inquiries and I dropped into it a note asking for instruction. Then I went back to my high tea of tinned salmon and Paddy was sick again. I had no intention of being received into the church. For such a thing to happen I would need to be convinced of its truth and that was not even a remote possibility.

The impossibility seemed even more pronounced a week later when I returned to the Cathedral and met Father Trollope. I was to grow fond of Trollope in the weeks which followed, but at the first sight he was all I detested most in my private image of the church. A very tall and very fat man with big smooth jowls which looked as though they had never needed a razor, he resembled closely a character in one of those nineteenth century paintings to be seen in art shops on the wrong side of Piccadilly—monks and cardinals enjoying their Friday abstinence by dismembering enormous lobsters and pouring great goblets of wine. Poor Trollope, his appearance maligned him. He led a very ascetic life, and one of his worst privations was the rule which, at that period, forbade him to visit the theater, for he had been an actor in the West End-not a star, but one of those useful reliable actors who are nearly always in demand for secondary roles. First he had become converted to Catholicism (Dr. Fray, that former ogre of Berkhamsted, had persuaded his family, who lived in Lincoln under the shadow of the deanery, to oppose his conversion), and then he was driven further by some inner compulsion to the priesthood. There were many plays on his shelves among the theological books—reading them was the nearest he could get to the footlights.

It was some weeks before he told me his story, and it came like a warning hand placed on my shoulder. "See the danger of going too far,'' that was the menace his story contained. "Be very careful. Keep well within your depth. There are dangerous currents out at sea which could sweep you anywhere." Father Trollope had been swept a very long way out, but the turbulent sea had not finished with him yet. He held a high position in the Catholic Nottingham world: he was Administrator of the Cathedral, well placed to rise into a hierarchy where men of business ability are valued, but he was deeply dissatisfied with any future which could be represented as success—he hadn't yet sacrificed enough, and a few years after I left Nottingham he wrote to tell me that he was entering an order, an order which was to my mind the least attractive of any, the Redemptorist. What had these monks, with an obligation to dwell in all their sermons and retreats on the reality of hell, in common with this stout cheerful man who loved  the smell of grease paint and the applause at a curtain fall? Perhaps nothing except the desire to drown. A few years later he was dead of cancer.

It was quite a while before I realized that my first impression was totally false and that I was facing the challenge of an inexplicable goodness. I would see Trollope once or twice a week for an hour's instruction, and to my own surprise I came to look forward to these occasions, so that I was disappointed when by reason of his work they were canceled. Sometimes the place of instruction was an odd one—we began our lesson, perhaps, with a discussion on the date of the Gospels on the upper deck of a tram swaying out to some Nottingham suburb where he had business to do and concluded it with the significance of Josephus in the pious pitch pine parlor of a convent.

I had cheated him from the first, not telling him of my motive in receiving instruction or that I was engaged to marry a Roman Catholic. At the beginning I thought that if I disclosed the truth he would consider me too easy game, and later I began to fear that he would distrust the genuineness of my conversion if it so happened that I chose to be received, for after a few weeks of serious argument that "if" was becoming less and less improbable. Bishop Gore in his great book on religious belief wrote that his own primary difficulty was to believe in the love of God; my primary difficulty was to believe in a God at all. The date of the Gopels, the historical evidence for the existence of the man Jesus Christ: these were interesting subjects which came nowhere near the core of my disbelief. I didn't disbelieve in Christ—I disbelieved in God. If I were ever to be convinced in even the remote possibility of a supreme, omnipotent and omniscient power I realized that nothing afterwards could seem impossible. It was on the ground of a dogmatic atheism that I fought and fought hard. It was like a fight for personal survival.

My friend Antonia White many years later told me how, when she was attending the funeral of her father, an old priest who had known her as a child tried to persuade her to return to the church. At last—to please him more than for any other reason—she said. "Well then, Father, remind me of the arguments for the existence of God." After a long hesitation he admitted to her,
“I knew them once, but I have forgotten them." I have suffered the same loss of memory. I can only remember that in January 1926 I became convinced of the probable existence of something we call God, though now I dislike the word with all its anthropomorphic associations and prefer Chardin's "noosphere," and my belief never came by way of those unconvincing philosophical arguments which I derided in a short story called "A Visit to Morin."

"Oh," it may be said, "a young man is no match for a trained priest," but in fact, at twenty-two, fresh from Oxford and its intellectual exercises, I was more capable of arguing an abstract issue or debating a historical point than I am today. The experience of a long life may possibly increase one's intuition of human character, but the mass of memories and associations which we drag around with us like an overfull suitcase on our interminable journey would weary me now at the start with all such arguments as we indulged in then. I cannot be bothered to remember—I accept. With the approach of death I care less and less about religious truth. One hasn't long to wait for revelation or darkness.

Although I was not received 'till early February 1926, I must have made my decision some weeks before, for I wrote flippantly to my mother in January, in the course of a letter full of other concerns, "I expect you have guessed that I am embracing the Scarlet Woman." The flippancy was fictitious: the fun of the intellectual exercise was over. I had reached the limit of the land and there the sea waited, if I didn't turn back. I was laughing to keep my courage up.

The first General Confession, which precedes conditional Baptism and which covers the whole of man's previous life, is a humiliating ordeal. Later we may be­ come hardened to the formulas of Confession and skeptical about ourselves: we may only half intend to keep the promises we make, until continual failure or the circumstances of our private life finally make it impossible to make any promises at all and many of us abandon Confession and Communion to join the Foreign Legion of the Church and fight for a city of which we are no longer full citizens. But in the first Confession a convert really believes in his own promises. I carried mine down with me like heavy stones into an empty corner of the Cathedral, dark already in the early afternoon, and the only witness of my Baptism was a woman who had been dusting the chairs. I took the name of Thomas—after St. Thomas the doubter and not Thomas Aquinas—and then I went on to the Nottingham Journal office and football results and the evening of potato chips.

I remember very clearly the nature of my emotion as I walked away from the Cathedral: there was no joy in it at all, only a somber apprehension. I had made the first move with a view to my future marriage, but now the land had given way under my feet and I was afraid of where the tide would take me. Even my marriage seemed uncertain to me now. Suppose I discovered in myself what Father Trollope had once discovered, the desire to be a priest? At that moment it seemed by no means impossible. Only now after more than forty years I am able to smile at the unreality of my fear and feel at the same time a sad nostalgia for it, since I lost more than I gained when the fear belonged irrevocably to the past.

Graham Greene, the British novelist, was the author of The Power and The Glory, The Heart of the Matter, Our Man in Havana, A Sort of Life, and many other works.

The Birth of a 'Catholic Writer'