‘But to be Young Was Very Heaven’

To God who gave joy to my youth
By Robert P. Imbelli
Religious Life 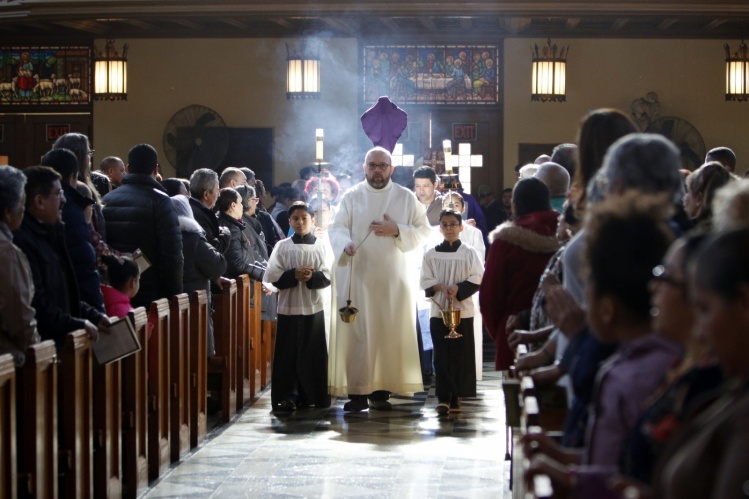 A deacon candidate and altar servers lead a procession at St. John-Visitation Church in the Bronx, March 24, 2019 (CNS photo/Gregory A. Shemitz).

For a boy of fourteen, growing up in a lower middle-class neighborhood in the South Bronx, heaven was far from the young Wordsworth’s paean to the French Revolution. Closer to heaven were the World Champion New York Yankees, about to embark, in 1953, on their record fifth-straight World Series title.

Bliss it was to be alive and marvel at one of Mickey Mantle’s tape-measure home runs. And one no longer had to spend 50 cents on a bleacher seat at nearby Yankee Stadium. The eight-inch illuminated screen had finally made its way into most apartments of the five-flight walk-ups that housed Manhattan’s overflow.

But there was another bliss that even a fourteen-year-old intuited to be still more heavenly. It was summed up by the altar boy’s first response at the Tridentine Mass’s “Prayers at the Foot of the Altar.” To the priest’s proclamation, “Introibo ad altare Dei” (“I will go to the altar of God”), the server replied, “Ad Deum qui laetificat iuventutem meum” (“To God who gives joy to my youth”). Few were the boys who, at some point, did not envision themselves in the role of the priest, announcing: “I will go to the altar of God.”

Bliss even those early mornings, with the smell of incense and beeswax awakening the senses. In retrospect one can perceive a formative ascesis for the youngsters who served Mass. Memorizing the Latin responses, phonetically transcribed on the four-sided instruction card: “iuventutem—u ven to tem;” rising at 6 a.m. to arrive with time to spare for the 7 o’clock Mass in hope that the old sacristan with gnarled hands would let you toll the monumental bell; struggling to light the silver candlesticks perched high above the altar, wicks stubbornly uncooperative; even sacrificing Captain Video and the Video Ranger on Monday evenings to serve Benediction at the Miraculous Medal Novena.

Our small “national” parish had three priests, the pastor and two “assistants.” And though there was no parish school, there was an abundance of funerals, baptisms, weekly Masses, catechism classes, and hospital visits to keep them busy. One, recently arrived from Italy, used his “day off” to work, over many years, toward a doctorate at Fordham University. He became a mentor and friend, plying this high-school freshman with books beyond my ability to understand fully, but which nonetheless enchanted and opened vistas. Even more significantly, he guided me into the worlds of opera and classical music that have delighted and sustained me for these nigh seventy years since he first gave me a two-volume set of 78-rpm records of Verdi’s Aida.

The memory has remained as an urgent reminder that discerning the boundary between good and evil is an ongoing imperative.
sharetweet

I mentioned the Monday evening novena that was a parish staple. It kindled devotion, even as it was, undoubtedly, a social occasion as well: time to pray, but also to meet and to gossip on the church steps. A further feature of those Monday evenings was the presence of a visiting priest, a teacher who offered the lengthy sermon in the course of the novena. He was a fluent speaker, but without rhetorical pretense. His sermons, as I recall, were both straightforward and substantive. Not only was he a fresh voice, he avoided the formulaic approach that marked many a Sunday sermon. His gave one pause, made one think. In addition he was personally affable and considerate. Before the service he’d inquire about our families and our schoolwork, not in a perfunctory way, but showing real interest. Often, after the novena, I would accompany him the four blocks to the subway station for his return home.

One day in January, I was summoned to my high school’s front office. There I was astonished to be given a piece of mail addressed to me. Inside was a note wishing me a “happy fourteenth birthday.” It was from the novena priest. The envelope also contained two dollars. Now two dollars for a fourteen-year-old in 1953, was, if not quite bliss, certainly a welcome blessing. Even more than the money, though, was the sense of being remembered, cared about. A small gesture, perhaps, but precious to me. The following Monday I expressed, as best I could, my thanks for his thoughtfulness, and Father invited me to go with him to a movie that coming Saturday. I arrived at the residence where he lived and he brought me to his room. To my embarrassment, I was suddenly maneuvered onto his knee and given fourteen birthday slaps on my backside. Confused and embarrassed, I was told it was customary in his family to celebrate birthdays in this fashion.

Absolutely nothing else occurred, that day or thereafter. We went on to the movies. I have no recollection of what we saw. But I remember that on the bus we discussed Leonard Feeney, SJ, whose poems and essays we had been reading in my high-school English class. I dimly knew that there was some controversy surrounding Feeney, and Father explained to me Feeney’s misinterpretation of the Church’s teaching regarding who could be saved. I listened intently, avid to understand.

Yet now, in light of all that has transpired over the last twenty years, I cannot but wonder whether anything more had been intended. In language that has, sadly, become all too familiar: Was I being “groomed”? Did a sensitive, intellectually alert priest see in me a young protégé, perhaps a future seminarian? Or was a lonely man impelled by a less salutary desire? I cannot hazard an answer. But the memory has remained as an urgent reminder that discerning the boundary between good and evil is an ongoing imperative, and that we are all too often prone to self-deception.

Once the press of schoolwork forced me to cease serving the Monday evening novena, our paths no longer crossed. For most of the years since 1953, I considered my interaction with Father in a positive way, grateful for his solicitude and instruction. And I did ascend to the altar of God who was, indeed, the joy of my youth, and who continues to pour forth blessings. I remember thankfully, eucharistically, to our gracious God all those priests whose guidance, sure or stumbling (like my own), has accompanied me on the way.

Rev. Robert P. Imbelli, a priest of the Archdiocese of New York, is Associate Professor of Theology Emeritus at Boston College.