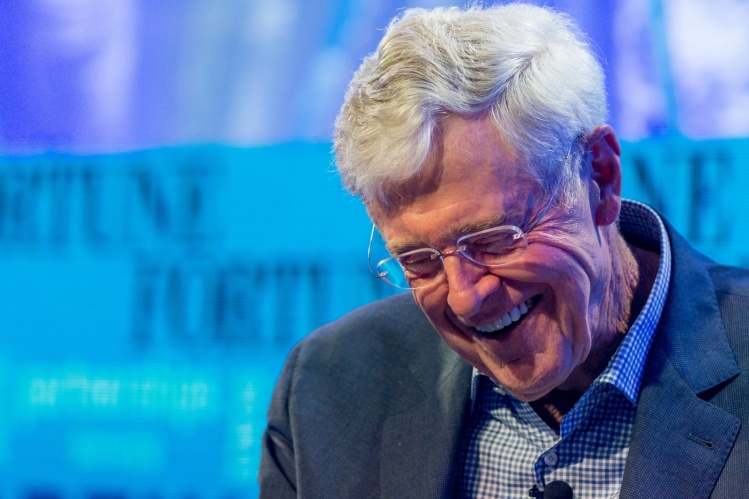 Last month the seminary at The Catholic University of America in Washington, D.C., canceled a talk from the popular author Rev. James Martin, SJ, after a fringe group on the Catholic right attacked the priest’s efforts to encourage dialogue with the LGBT community. But just a week ago the university’s business school rolled out the red carpet for Charles Koch. Along with his brother David, the billionaire industrialist played a key role in financing the Tea Party movement, and has long bankrolled a vast network of groups fighting against unions, living wages for workers, Medicaid expansion, and efforts to address climate change.

The Charles Koch Foundation has given nearly $13 million to the university’s business school in recent years, sparking challenges from some Catholic scholars who argue that the Koch brothers’ deep pockets have been used to advance policies that clash with Catholic social teaching when it comes to economic and environmental justice—and the priorities of Pope Francis. Despite this, Koch headlined the $2,500-a-ticket conference, “Good Profit: How Profitable Business Can be a Force for Good,” while Timothy Busch, a Catholic CEO from Orange County, California, who operates a chain of luxury hotels and founded the Napa-based winery Trinitas Cellars, warmly introduced him. Busch’s $15 million gift to Catholic University last spring was the largest in the school’s history.

“He shares our values,” Busch said while introducing Koch. “I tell Charles he's a Catholic, he just doesn’t know it.”

During an on-stage interview with Andreas Widmer, who directs the business school’s program in principled entrepreneurship, Koch spoke about characteristics he looks for in those who work for his companies. “We hire first on values and we promote on principles,” he said. Koch argued that economic freedom is stifled by government overreach and corporate subsidies. “The market is full of cronyism,” Koch said. “You look at all the rules and protectionism that are limiting opportunity for the disadvantaged and creating this two-tiered society where some of us make a lot of money and others can’t get started.”

To describe the discussion with Koch as a softball interview would be an insult to the sport.
sharetweet

To describe the discussion with Koch as a softball interview would be an insult to the sport. Widmer asked no tough questions. As Jane Mayer of the New Yorker magazine and other investigative reporters have extensively documented, Koch Industries has a history of covering up toxic spills, bullying those who challenge them, and underwriting well-funded disinformation campaigns to cast doubt on the overwhelming scientific consensus on climate change. "They have a pattern of lawbreaking, political manipulation, and obfuscation,” Charles Lewis, founder of the nonpartisan Center for Public Integrity, said about the Kochs in a 2010 interview. “I’ve been in Washington since Watergate, and I’ve never seen anything like it. They are the Standard Oil of our times.” Not surprisingly, Koch wasn't asked about any of this.

The conference also showcased the way Busch, whose tenure on the university’s board of trustees recently ended, has created an influential networking space—the Napa Institute—where wealthy Catholic business leaders rub shoulders with clergy, members of the hierarchy, and conservative politicians. The Napa Institute organized last week's conference, and Busch and the Institute hosted a meeting at the Trump International Hotel in Washington last spring billed as an exclusive gathering of “Catholic leaders, clergy and important DC insiders.” Prominent leaders in attendance included Supreme Court Justice Samuel Alito, former senator Rick Santorum, Los Angeles Archbishop Jose Gomez, and Alan Sears, founder of the Alliance for Defending Freedom, the organization representing a Colorado baker who refused to prepare a wedding cake for a same-sex couple. The high-profile case is now before the Supreme Court.

“Our events are open seating so you can pick your favorite bishop, priest, or business man to sit next to,” Busch explained in remarks at the conference last week. He touted a cigar-bar reception on the eleventh floor of the Renaissance Hotel, where conference attendees stayed. “You don’t have to smoke cigars, ladies. It’s open bar. Great wine. Oh, it’s our wine,” he said to laughs from the audience. Busch praised Koch’s donation to the university, and wasn't shy about taking credit. “We reenergized The Catholic University of America and made it great again,” he said. It wasn’t the only time at the conference Busch used a line that echoed President Trump’s rhetoric. Busch also praised the global Catholic news outlet EWTN, whose board he sits on and which has aired some of the Napa Institute’s events. “It’s much better than this fake news you get elsewhere,” Busch quipped.

Koch and Busch, who play golf together at the same California course, share a libertarian economic philosophy that is out of step with traditional Catholic social teaching on the economy and treatment of workers. The Catholic Church has officially supported a living wage since at least 1891, when Pope Leo XIII affirmed that principle along with the right of workers to organize. The U.S. Conference of Catholic Bishops endorses raising the federal minimum wage. In fact, it was a priest at the Catholic University of America, Rev. John Ryan—also known as the Right Reverend New Dealer—who became a leading national advocate for living wages and helped inspire social reforms that came to fruition under President Franklin Roosevelt. Busch, in contrast, has blasted the minimum wage as an “anti-market regulation that leads to unemployment” and does “great harm” to workers. Koch-backed groups have also fought efforts to raise the minimum wage. While Pope Francis recently called unions “prophetic” institutions that “unmask the powerful who trample the rights of the most vulnerable workers,” the Kochs have financed anti-union campaigns for years.

Koch’s businesses and politics can’t be so neatly separated.
sharetweet

At a time when the pope uses his global pulpit to challenge “an economy of exclusion,” to praise unions, and to elevate climate change as an urgent moral issue, it’s worth asking why a business school at the nation’s only Vatican-chartered university has closely aligned itself with a billionaire whose political networks have been on the opposing side of these causes. In an interview with Crux before the conference, Catholic University President John Garvey addressed that question.

“Charles Koch is not being invited to discuss his politics, or the environment, or his thoughts about the church,” Garvey said. “He’s going to talk about hiring employees based on virtue and good habits.” But after distancing the university from Koch’s politics, Garvey didn't shy away from embracing Koch. “The church’s teachings on business ethics and morality certainly overlap with his philosophy," he said. "And the church—from Leo XIII through Francis—has supported job creation to help the poor, and entrepreneurship which strives to make products that alleviate hunger, suffering, and want. I scratch my head at those who don’t see that overlap.”

I’m also my scratching my head.

Koch’s businesses and politics can’t be so neatly separated. The Koch brothers haven’t become some of the wealthiest men on the planet by selling fair-trade coffee, but by running toxic oil refineries that pollute what Pope Francis calls “our common home.” There is nothing principled or noble about funding groups that deny climate change, or in amassing enormous political power in the service of the wealthiest few. Would Catholic University invite an executive from the National Rifle Association to wax philosophical about passing sensible gun laws, or a tobacco industry executive to talk about public health?

Principled entrepreneurship can be a noble goal that should be taught at business schools. But if The Catholic University of America continues to think that the Kochs are poster boys for ethical business practices, reality is indeed stranger than fiction.