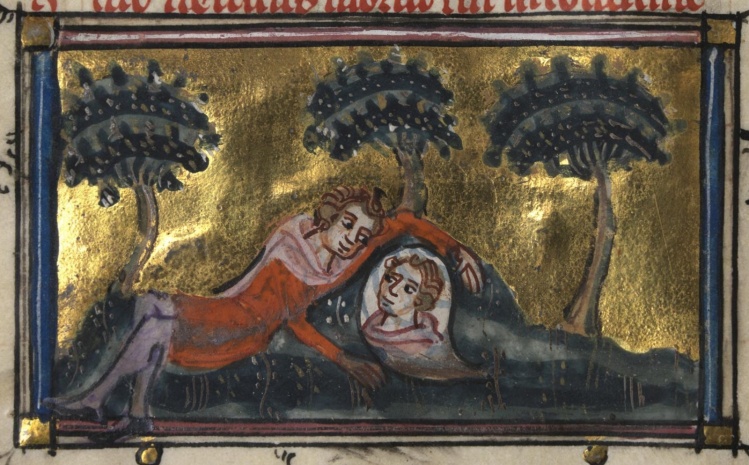 Narcissus gazes at the spring. From a 14th Century copy of Roman de la Rose

This article appeared in the November 27, 1942 issue Commonweal

NATURAL RELIGION assumes that it will find the Unconditional objectively manifest in existence, and studies human experience in that hope, only to find that the more it learns, the clearer it becomes that all experience is dualistic, bifurcating, into Individuality versus Universality, Known Object versus Knowing Subject, Extension versus Thought, Free Will versus Necessity, etc., and that it is impossible to relate these contradictory elements in such a way that either is conditioned by the other.

Since it cannot reconcile, Natural Religion must repress, and whether it choose to admit the Esthetic or the Ethical, it walks in dread lest the other half of life which it has rejected should come to consciousness, for then it must also become conscious that its choice was arbitrary, from which knowledge only one conclusion is possible, the scepticism of despair—What is Mind ? No matter. What is Matter? Never mind.

Revealed religion starts out with the belief that God created the world ex nihilo. In that case everything manifest is equally real but equally conditioned, and if we cannot resolve the dualism of our experience, it is in our perception of existence that this dualism must lie, not in existence itself, i.e., a contradiction we manufacture for ourselves because we have eaten of the tree of the Knowledge of Good and Evil.

A married man and a married woman are tempted to commit adultery. They consult the Esthetic who asks smiling, "Are you in love? Really? You're quite sure? Then, children, I give you my blessing." Just to be on the safe side they consult the Ethical also who exclaims: "How dare you suggest such a thing. Quite inexcusable under any circumstances. But there, there, don't cry. I'll help you. I have here some excellent sedative pills. Take two every three hours." As a last resort they consult the Religious who, before they can have even begun to tell their story, says: "I know what you are going to ask. If you are not in love, the question is academic and you should be ashamed of wasting my time and yours. If you are in love, I am very glad, but the answer is no. Suffer and praise God."

The recognition that, on any given occasion, one's will is evil is not an inevitable consequence of the structure of the human mind, like the recognition of the truths of mathematics, for one can refuse it; that is, it is a subjective religious event. The conversion of an evil will into a good will cannot be its own act, for it is impossible to will the opposite of what one wills; that is, it is an act of God's.

Freed from their religious pretensions, the esthetic and ethical can realize their proper functions, the first of providing a clear mirror in which each man may discover what his will is, the second of providing the means by which every good intention may translate itself into an effective result. Magic becomes Art: Ethics becomes Science.

Man's sinfulness is the same whether he recognizes it or not.
sharetweet

Artistic truth is—for what is, is— but of no practical value. Scientific truth has practical value, but it always remains corrigible, true only in a pragmatic sense. Both are beyond good and evil, but only because they are of secondary, not primary importance. Man's sinfulness is the same whether he recognizes it or not. The good or evil of his intention is the same, whether he succeeds in realizing it or not.

Since Art and Science are human activities, there is always an element of sin, the sin of idolatry, in our creation and enjoyment of either.

The lowbrow majority perceive, correctly, that if art and science are to be beyond good and evil, their importance will be secondary. The demand therefore that one or the other or both shall return to being the religion of self-love, that art shall flatter them, science give them the power to be successful in love, business and war.

The highbrow minority perceive, equally correctly, that if art and science surrender to this demand, they contradict their real nature. They try to insist, nevertheless, that their importance is primary, to construct a religion in which good and evil shall have no importance.

Once upon a time, in a poor woodcutter's cottage in the depths of the forest, a hunchback was born named Narcissus. His parents never dared to tell him of his deformity, and since they were too poor to own a looking-glass, there was no danger of his finding out the truth for himself. The time came, however, when he wished to go out into the world to seek his fortune. His parents, foreseeing what he would suffer, tried in vain to dissuade him. As he was on the point of leaving, his mother said to him: "When you arrive at a town, you will probably notice that people stare at you. Don't let this worry you. It would be odd, indeed, if they did not, for you are the handsomest young man in the world."

And so it was. People stared but, thinking he knew the reason, Narcissus was unperturbed. One day he came to a spring and saw his reflection for the first time, but the conviction that he was beautiful had become such a habit with him, that what he saw was only the reflection of his belief. "Ah, how handsome I am," he sighed, and remained enchanted by the spring. Ages went by until one fine morning a small boy passed that way, and catching sight of Narcissus, shouted: "Look at the funny hunchback," and threw a stone which struck him on the forehead so that he fell senseless.

When he came to himself, his mind was a blank. Try as he would to remember his past life, nothing came into his head but a meaningless phrase, "Look at the funny hunchback."

While he was repeating these words slowly to himself, he caught sight of his reflection in the spring, and suddenly realized what they meant. He sat there in a stupor of despair, repeating the phrase over and over again, but presently he began to listen to himself repeating it. "So what," he thought, "one doesn't meet a hunchback every day of the week, still less a hunchback who knows he is a hunchback. It's pretty smart of me to realize that I am not beautiful, and pretty brave of me to admit it." As he thought thus, the pitch of his chant rose, and its tempo accelerated. When the boy, who had taken to his heels as Narcissus fell, returned to make sure that he was all right, he found him sitting by the spring, jabbering so fast that the words were scarcely intelligible, and in such a high squeak that, like a bat, he was scarcely audible:

Look at the funny hunchback.