The Art of the Con 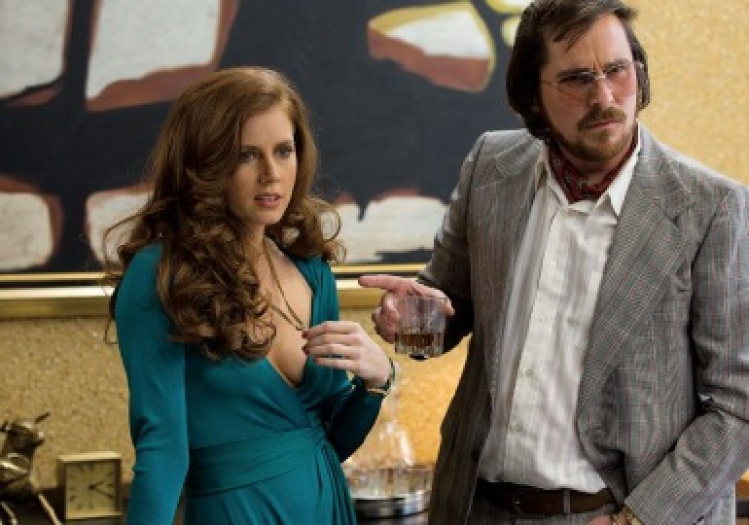 We’ve all seen movies in which con men don disguises, but when Irving Rosenfeld, the fraudster-hero of David O. Russell’s rambunctious comedy-drama American Hustle, reappoints the top of his head—with numerous hair pieces and a comb-over—he isn’t really disguising himself for a specific swindle. He’s just firming up his daily persona. With his awful 1970s coiffure and lounge-lizard apparel, Rosenfeld (played by Christian Bale) has turned himself into a wheeler-dealer of the disco era. Like Jay Gatsby, he’s putting together an ideal version of himself.

That’s why Sydney Prosser (Amy Adams), his lover and confederate in crime, is the perfect partner for him. Having come from the Midwest determined “to become anything but what I was,” she begins her New York working life honestly enough (like Irving, who’s inherited his father’s glazier business). But when her own talent for self-invention meshes with Rosenfeld’s, she becomes “Lady Greensleeves,” a British visitor whose tony accent and distinguished airs help Irving lure suckers into his fraudulent investments and art-forgery deals. Sydney herself is entranced by her alter ego and keeps slipping into the aristo accent even when talking in private with her accomplice. It’s as if she’s found a way to make money from a multiple-personality disorder. And though Irving still possesses a sense of responsibility toward his wife Rosalyn (Jennifer Lawrence), whose life and personality seem taken from The Real Housewives of New Jersey, it is Sydney’s manufactured elegance that makes him feel he’s living a Manhattan dream of glory.

Then the Feds pounce. But the con artists luck out: the head of the sting operation that nabbed them, Richie DiMaso (Bradley Cooper), is himself a kind of hustler and needs their help to entrap Carmine Polito (Jeremy Renner), the morally vulnerable mayor of Camden, New Jersey. Polito is sincerely devoted to promoting his city’s welfare, but DiMaso wants to nudge him into the company of gangsters and corruptible congressmen. (This scheme is very loosely modeled on the ABSCAM affair, but American Hustle remains fiction.) Since Irving dislikes DiMaso (who’s a rival for Sydney’s affections) and sympathizes with Polito, how is this scam going to affect his self-image? He’s used to thinking of himself as a swashbuckling trickster bilking only the greedy. Is he now just a government shill luring a good man to ruin?

The film’s reconstruction of the period is spot on. The hairstyles and clothes help the actors define their characters. Mayor Polito’s Elvis pompadour, for example, makes him look like the man who could turn Camden into the next Las Vegas. Even more impressive is the film’s use of pop music to tap into fantasy life. Irving spots Sydney’s innate classiness when he discovers that she shares his enthusiasm for the great Duke Ellington at Newport album. Then, exhilarated by their new partnership, he lip-synchs the Broadway song “I’ve Got Your Number” (“We’ll break the rules a lot / We’ll be damn fools a lot”). Later, when Rosalyn contemplates betraying her husband to the mob, she lip-synchs the title track of Live and Let Die, and her face takes on the self-dramatizing, glamorous ferocity of a James Bond villainess. This is a movie in which every main character has an inner soundtrack. But don’t we all?

Not that the actors let the hairstyles and music do all their work for them. The four principals have all worked with Russell before (Cooper and Lawrence in Silver Linings Playbook, Adams and Bales in The Fighter). Here Russell subtly modifies the qualities he drew out of these actors in their earlier collaborations. Bradley Cooper’s poignant bravado from Playbook now becomes whiney and less sympathetic. Lawrence’s comic mouthiness takes on a touch of brass. Bale’s volatility in The Fighter gets tamped down, so that we can feel Irving seething behind his know-it-all exterior. And Amy Adams’ steely sexiness, so heroic in The Fighter, makes Sydney enigmatic enough to keep us guessing.

The dialogue by Russell and Eric Singer has a loopy, out-of-left-field comic eloquence, as when Irving describes his wife as “the Picasso of passive-aggressive karate.” As director, Russell is a master at orchestrating voices raised in anger or self-vindication. (“Thank God for me!” brays Rosalyn at one point.) No moviemaker since Preston Sturges has made the din of recrimination this funny. And no living director (except Pedro Almodóvar) so riskily walks the knife-edge between hilarity and pain.

Yet there is something missing from this exhilarating movie. If fails to answer, or even ask, some obvious questions about its own characters, especially in its second half. Why does Irving, so ruthless toward his past victims, get so dewy-eyed about Mayor Polito as the confidence trap springs shut? Because the mayor cares about his constituents? When did Irving become so civic-minded? Or is it because Polito has a nice wife and many children? Did none of Irving’s previous targets have a family? True, Polito does gift Irving with a microwave, but surely the swindler received more expensive gifts in the past from those for whom he felt no pity. This relationship between knave and gull needed to be explored earlier in the story—and with more than just a few close-ups of Christian Bale staring regretfully at his future victim.

In American Hustle’s first half, Irving and Agent DiMaso are both portrayed as comic monsters. But later, Russell starts to play favorites by making the agent so clownish that it strains our credulity (despite the gusto of Cooper’s performance), while allowing the con artists at least some shreds of decency. After the final sting, Irving sums up the results: “The big leagues…the money men…you got none of them.” But in the film as in the real ABSCAM story, some corrupt congressmen face indictment and the shoddy side of Washington deal-making is laid bare. Is this really nothing? And in view of how many investors may have been ruined by Irving in his pre-ABSCAM days, who is he to be so self-righteous? David O. Russell seems to have been scammed by his own fictional character.

WATCHING THE FIRST hour of Martin Scorsese’s 180-minute The Wolf of Wall Street, I kept thinking, “Wow, one great scene after another! This is going to be a masterpiece.” By the third  hour I was groaning, “Oh no! One damn scene after another! This is going to be torture.” It wasn’t. The brilliance never lets up, and there are just as many great moments toward the end as there are near the beginning. But, despite all the great scenes, the film lacks dramatic progress. Wolf dazzles while going nowhere.

The Wolf of Wall Street tells the (mostly) true story of Jordan Belfort, who made millions for himself and his stock-pitching underlings by a “pump and dump” operation: pump up the value of “penny stocks” by lying to investors, watch the stock prices temporarily rise, then dump them for a huge profit just before they fall and leave your investors hanging. At the beginning of this film Belfort introduces himself to us as “a money-crazed little shit.” At the end of three hours he is a money-crazed, sex-crazed, dope-crazed little shit. All the stimulants and endless parades of hookers don’t seem to do much damage to his character, if only because he was so damaged to begin with.

I suspect this is a case of a director starting to make one kind of movie and then discovering, mid-production, that he wanted to make a different kind. When young Jordan begins working at a relatively respectable brokerage, his mentor (a superb Matthew McConaughey) advises him that his only real objective should be to “keep the clients on the faro wheel.” So we can see the resemblance to the more blatant hustle of Scorsese’s Casino. But as Wolf unfolds, with Belfort launching his own operation, the script doesn’t focus on the details of how these unscrupulous financiers make their money but on the sick pleasures they spend it on: fellatio in glass elevators, public copulation on the sales floor, parades of animals (monkeys, pythons!), not to mention dwarf-throwing. This movie has less in common with Oliver Stone’s Wall Street than with Fellini’s Satyricon.

Yet the actors wring an amazing amount of comedy out of all this sordidness. Leonardo DiCaprio is inexhaustible as Belfort, and there’s not a dud among the supporting performances. Rodrigo Prieto’s photography dazzles, Thelma Schoonmaker’s editing makes the film pulsate, and even the soundtrack’s golden oldies take on new life with accelerated tempos and techno burnish. Every cinematic element in The Wolf of Wall Street keeps your eyes riveted to the screen, even as your mind begs for mercy.