Apologies (Almost) All Around 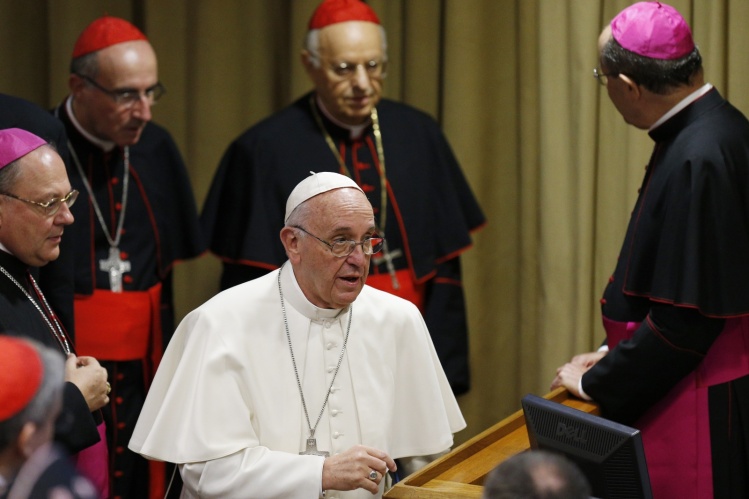 ROME—A couple of quick developments before the daily press briefing, where reports from the synod's small-group discussions will be distributed.

First, before Pope Francis began his Wednesday catechesis, he offered a mysterious apology: “In the name of the church, I ask forgiveness for the scandals that recently have occurred in Rome and at the Vatican.” Then he delivered an address on the “scandal” of breaking the promise to love our children. “Jesus taught us to become like little children; in protecting our children, and protecting the family, may we keep the great promise which God has given to us in them, an through them, to our human family,” Francis said.

So what was Francis apologizing for? Take your pick: The sexual-abuse scandal (as he did in Philadelphia)? The leak of a letter criticizing the synod process signed by who-knows-how-many cardinals, which Cardinal Müller* recently compared to the Vatileaks scandal (more on that in a moment)? The Polish priest who announced he was in a relationship with another man—and that there are many more like him—on the eve of the synod? The Polish priest who had been spokesman for World Youth Day until it came to light that he had fathered a child? The absurdly ostentatious funeral for an alleged mafia boss? The financial scandals of the Vatican Bank? It could be any of these, or others (see John Thavis’s blog), or all. But the fact that Francis offered so general a mea culpa could indicate his frustration with the drip-drip of stories that make it look like little has changed since Benedict’s Vatican fell under the shadow of scandal.

Second, the letter: Last night, Sandro Magister finally filed an update, in which he declares that while he may have gotten about one-third of the signatories wrong, his story was basically right all along, no matter how many cardinals have denied signing his version of the letter. He asks the obvious question: If his version was so erroneous, then why did Pope Francis respond to every point it made during his surprise synod intervention last Tuesday morning? Magister also recaps recent developments: Cardinal Pell acknowledged signing a letter—but not exactly the one Magister published—as did Cardinal Napier, and now so has Cardinal Dolan (during a radio interview whose audio was released last night). But then Magister provided some explanation of why he published the letter in the first place—and it’s not just because it was news.

Because the substance remains that which the statement of Cardinal Pell and even more so the interview with Cardinal Napier have confirmed: a widespread and growing unease among many synod fathers over the insistence in imposing upon them as the basis of discussion a document, the “Instrumentum laboris,” which every day shows itself more and more to be inadequate, and the fear that this with its ambiguities will contaminate the “Relatio finalis,” the writing of which is in the hands of a commission entirely appointed from on high, with an overwhelming presence of innovators.

This unease has been smoldering under the ashes during the whole first week of the synod, kept buried by those who have control over the procedures, Pope Francis in the first place and then the general and special secretaries.

But precisely the coming to light of the letter from the thirteen cardinals—with the resulting explosion of discussion—has in fact restored to the synod fathers a more concrete possibility of governing the processes and results of this decisive summit of the worldwide Church.

So there you have it. Magister agrees with the contents of the letter he published, and he believes that by making the text public he has strengthened the hand of those who resist the “innovators.”

* An earlier version of this sentence erroneously said that Cardinal Pell had compared the leak to the Vatileaks scandal.