'No One Is a Stranger' 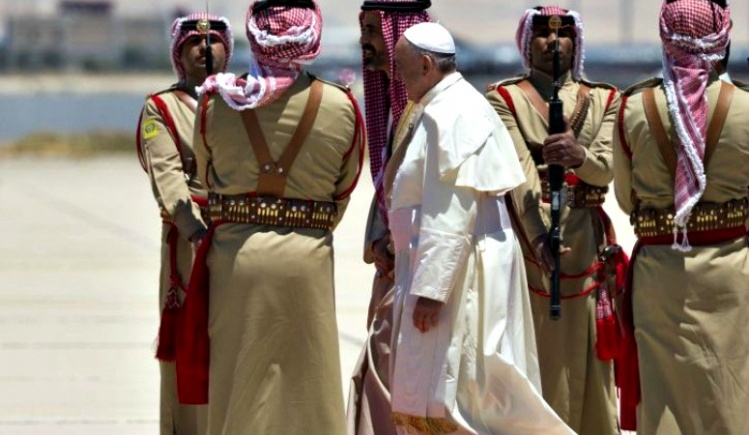 A Catholic family from Jordan was one of six households to address Pope Francis at September’s World Meeting of Families in Philadelphia. As an American Catholic who has lived among Christians in the Jordanian capital of Amman, I was eager for their presentation, hoping it might challenge the belief taking root among American Catholics and others that the Middle East is universally a place of Muslim intolerance toward Christianity. I thought that Francis and those in attendance might hear, in spite of the very real dangers currently faced by many Christians in the region, of the generally tolerant environment of Jordan, characterized by peaceful co-existence. Unfortunately, the statement—delivered by a man named Nidal Mussa Sweidan, who was accompanied by his wife and two daughters—played into the notion that Christians are invariably subject to persecution.

The horrors suffered by Christians in certain parts of the Middle East cannot be overlooked. Islamic State fighters have captured hundreds of Christians in Syria in a brutal campaign that includes execution (including crucifixions), torture, rape, and enslavement of female captives. Up to a million other Christians are said to have fled their country. Affiliates in Libya notoriously executed dozens of Christians earlier this year, murders that were recorded and then seen around the world. In Iraq, tens of thousands of Christians have been displaced from the northern city of Mosul since the ouster of Saddam Hussein in 2003. In 2013, dozens of churches in Egypt were destroyed in arson attacks.

Sweidan never explicitly said the words “Muslim” or “Islam,” but he didn’t have to. In speaking almost exclusively of “religious persecution” and a “hostile environment,” and in praising the Christian community as the singular source of light and goodness in the region, he appealed to negative assumptions about Muslims and cast Islam as the enemy. This was a lost opportunity. Sweidan could have offered a more hopeful message by noting that the historic coexistence of Islam and Christianity is, despite challenges, still evident in Jordan.

Pope Francis himself was witness to this when he visited Jordan in 2014. He was greeted warmly both by ordinary Jordanians and the kingdom’s leadership, which sees promotion of interreligious cooperation and preservation of Arab Christianity as a core part of its Islamic heritage. I saw signs of it as well during the year I spent in Jordan, researching Muslim-Christian relations on a U.S. Student Fulbright grant from 2013 to 2014. Christmas trees are ubiquitous in metropolitan centers during the winter months; large crosses adorn churches, and bells are rung loudly at Mass times. The Christian community, though small, is courted by the state and is generally more economically prosperous than the country’s Muslims. Interfaith initiatives, some with the support of the monarchy, are often led by older clergy members and scholars, but young Muslims and Christians are increasingly initiating their own efforts. In the summer of 2014, when ISIS captured Mosul, young people in Amman marched alongside older leaders in a demonstration against violence and extremism, wearing sashes and holding banners that read “Muslims and Christians together.” YARA, a non-profit started by a young Muslim man named Amir Shihadeh, raises money for Syrian refugees and other humanitarian causes and promotes religious diversity through its “Coexist” interfaith project.

This is not to say that tensions between Muslims and Christian don’t exist. Christians worry about the support of some Muslims for Islamist parties or groups like ISIS, and Muslims worry about the influence of Christians (and the West) in their country. This sectarianism occasionally manifests itself, but these episodes tend to be as rooted in tribal and economic concerns as in religious ones, and rarely if ever do tensions boil over into the violence seen in other countries.

And in my day-to-day encounters with the people of Jordan, I not only heard stories about past tolerance and cooperation, but also experienced how Christians and Muslims continue to interact peacefully and supportively. On Easter Sunday in 2014, I accompanied my elderly Muslim neighbor, Najah, to the home of her Christian friend, Leila, with whom she celebrates the holiday each year. Najah brought Leila a t-shirt with a poem printed across the front. The lines of verse, written by the Jordanian poet Mustafa Wahbi al-Tal, known as Arar, speak of Jordan as a blessed land where “no one is a stranger,” and where the clanging of church bells and the echo of the call to prayer come together. After we shared a meal, Leila brought out a rug and scarf for Najah so she could perform her prayers.

It was unfortunate that those gathered in Philadelphia did not get to hear such stories, which would have been a helpful counterbalance to comments such as these, expressed by Sweidan:

Christian families currently living in our homeland are like candles, shining against the darkness of destructions, wars, killings, and persecution. Our family tries to live as a people of Beatitudes, modeling for others the only true answer of the world’s problems, Jesus Christ. The roots of our Christian communities date back two thousand years. Since then, there have been many periods of persecution, as others attempt to silence the word of Jesus….

There was no acknowledgment of peaceful co-existence in the past, of the centuries of tolerance during which Christian communities thrived under Muslim rulers. There was no mention of the tolerance that today is typical of Jordan. There was simply implicit condemnation of Islam and the unchallenged characterization of the country as a “hostile environment… this overwhelmingly non-Christian community [in which] the church youth group gives our children safe harbor where they can grow in their faith and feel supported and cared about.”

In listening to Sweidan’s comments, I was struck by their similarity to the fearful rhetoric heard on the Christian satellite television programs popular in Jordan. My Fulbright research involved looking at how these programs—some of which are produced in the region, some of which are broadcast from the United States, all of which are in Arabic—portray Islam. One American-based channel, Al-Hayat (“Life”), is known by both Christians and Muslims for its condemnation of Islam. In promoting evangelical Christianity, program hosts repeat historically Western tropes about Muslims—that they’re inherently violent, intolerant, and misogynistic. Created and backed by major evangelical ministries in the United States, Al-Hayat and other channels have promoted fear of Islam since the early 2000s, and more recently have capitalized on the rise of ISIS to make the case that Christians can never be at home anywhere in the Muslim world.

According to many Christian leaders I spoke with, and as I observed in my own relationships with Christian families in Amman, these programs are beginning to sow distrust of Muslims among the nation’s Christians. It would be a shame if the fear-mongering undoes the history of coexistence that Jordan takes pride in. The “Jordanian model,” as some have called it, could itself be at risk.

Which is why a more nuanced description of the situation in Jordan would have been useful for American Catholics to hear. A narrative of hostility and persecution confirms stereotypes about the Middle East while also playing into the American church’s messaging about threats to religious freedom in this country. It ignores the reality in places like Jordan, and thus only confirms for the audience the frightening picture of the Muslim world they’d already envisioned. It’s important to keep separate the very real horrors inflicted by ISIS from the ordinary encounters among Muslim and Christian communities, encounters that demonstrate tolerance and peaceful co-existence.

In short, Catholics would do well to heed the words of Pope Francis, who in his address to Congress several days before the Philadelphia event warned of a particular “temptation.” We must, he said, guard especially against “the simplistic reductionism which sees only good or evil; or, if you will, the righteous and sinners…. We know that in the attempt to be freed of the enemy without, we can be tempted to feed the enemy within.”