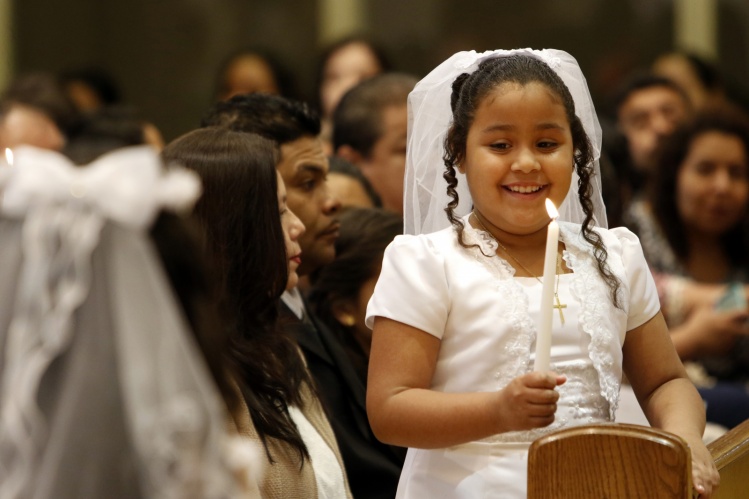 Another American diocese has announced that it will celebrate the sacrament of confirmation for Catholic children in the same ceremony at which they receive first communion. Manchester, New Hampshire, will become the eleventh U.S. diocese to adopt the practice, popularly referred to as the “restored order,” returning the Eucharist to its original place as the high point and culmination of Christian initiation. The change has been presented as part of a comprehensive renewal of lifelong faith formation in the diocese. Children will receive both sacraments at age eight.

Aside from these eleven dioceses, there has also been a certain amount of dabbling with the restored order in the United States. Two dioceses had instituted it, but succeeding bishops did not support the practice and discontinued it. In some dioceses, individual parishes have gained permission for the restored order even though the practice is not mandated for the diocese as a whole. In other instances, the restored order is practiced but parents can opt out if they wish. All of these options fall within the range given by the American bishops, who have decided that the appropriate age of confirmation for Catholic children who were baptized in infancy is seven to sixteen, thus giving wide latitude for diocesan bishops to formulate their own guidelines.

Eucharist, not confirmation, is the ongoing and effective sign of belief and belonging
sharetweet

Adolescent faith development, as important as it is, never had its “own” sacrament until the 1970s, when it became fashionable to delay confirmation until the children were “ready.” But how ready were they? Truth to tell, this aspect of confirmation was never a terrific success. Adolescents are often not ready to make a personal faith commitment come confirmation time, even when it is delayed to the eleventh grade, not to mention at age twelve or thirteen. Some are confident but others waffle, as adolescents are wont to do. The adolescent years are a time when young people are as likely to rebel as to cooperate with structures put in place by adults.

As a result of confirming at a later age, quite a number of Catholics baptized in infancy are never confirmed at all. Either that, or confirmation becomes what Pope Francis candidly and devastatingly called “the sacrament of farewell.” Every religious educator knows this. If the family is not committed, it’s easier to drop out than to stay the course. Or, if the kids do persevere, confirmation becomes “graduation” from religious education and frequently the end of church involvement. Obviously, this is not the intention, but these unintended outcomes are not uncommon.

The movement toward restored order has not been seen overall as a “fix” for the negative consequences of the practice of adolescent confirmation, however. It has a strong positive thrust in its own right, captured in the focus on family faith, and a shift to youth ministry as a value independent of sacramental preparation. The positive side is captured in this reflection on restored order from a catechist:

Another part of the equation that had been missing was a concerted effort to attend to the faith formation needs of parents. In recognizing that it is based upon the faith of parents that we receive children into the Church, we also had to admit that the sacraments were never intended to be catechetical carrots used to “trick” adults and children into learning more about their faith. Instilling in parents a hunger to know more and grow more in their own faith lives and giving them opportunities to do so, is the very best gift that can be given to the children of the parish.

We have found the Restored Order of the Sacraments to be about more than simply shifting around the order in which First Eucharist and Confirmation are received by children. It has become an invitation to reclaim our Christian calling to walk with others in the faith, to rediscover what a relationship with Christ means, and to show our children that this faith is not just something we learn about and then “graduate” from, but is the start of a relationship of learning and loving they will carry with them for the rest of their lives.