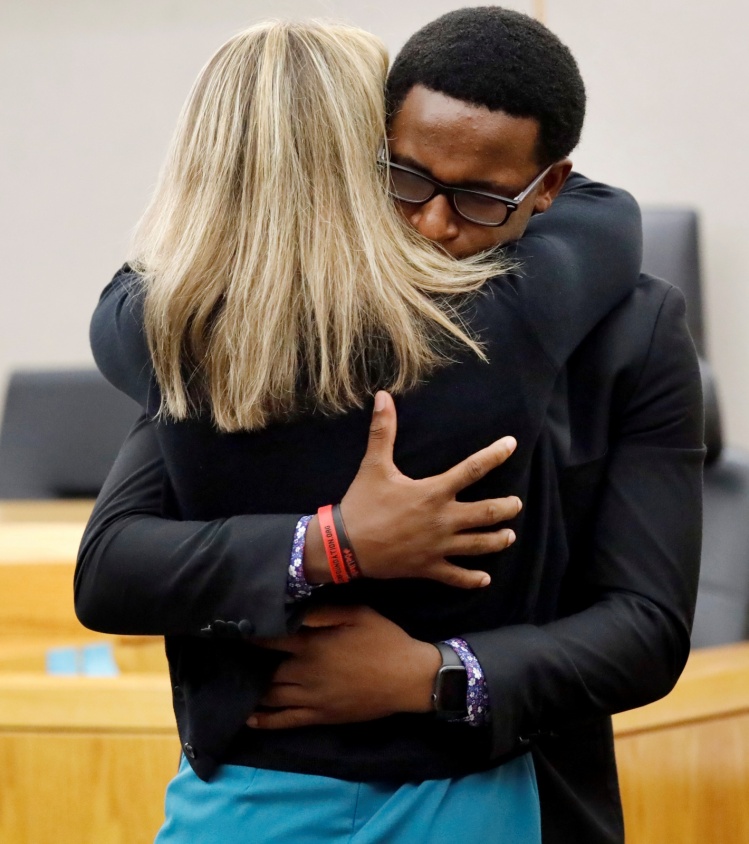 On September 6, 2018, off-duty officer Amber Guyger entered Botham Jean’s home by mistake and shot him twice, killing him. On October 1, 2019, Guyger was convicted by a Texas jury of murder. The next day, during Guyger’s sentencing, Botham’s brother Brandt gave a moving testimony in which he forgave Guyger for the killing, gave her a long hug, and called her to Christ. Almost immediately, the clip of his act went viral. Botham’s parents also gave testimonies, emphasizing the injustice of the system of which Guyger was a part and the need for radical change; their testimony, unlike their son Brandt’s, went largely unnoticed at the time, one more small heave in a groundswell that is only now, once again, cresting.

It should be obvious to any practicing Christian that these two messages have to go together. Forgiveness would not be forgiveness if it did not assume that the one forgiven is in the wrong and must amend her life. But the fascination Brandt Jean’s testimony held for so many onlookers lies in the idea that one must choose between an anger that clings to the past (and so cannot grow into God’s love) and a forgiveness and peace that refuses to be defined by the wrongdoing of others. In other words, one must choose between how the Psalms talk about evildoers—let sinners be consumed from the earth and let the wicked be no more—and how Christ talks about them. We have, as it happens, a word for the idea that these two ways of talking are mutually incompatible, and that word is “Marcionism”—the old heresy that the God of the New Testament was at odds with the God of the Old.

The actual Christ, the historical and not the Hallmark Christ, has no discomfort with the Psalms’ words about the wicked; in fact, he often quotes them. It is almost a commonplace to note that the greatest Good Friday Psalm, Psalm 22, continues beyond what Christ quotes to praise God’s deliverance and so points toward resurrection. It is less often noted that the next-greatest Good Friday Psalm, Psalm 69, calls down punishment upon punishment upon one’s persecutors, with no acquittal. But didn’t Christ forgive his persecutors, above all on the cross? Of course; that is the point. Forgiveness is entirely compatible with anger. Sometimes it even demands it. God’s offer of forgiveness precedes the conversion of the evildoer, and the anger lasts until she converts. That leaves some time—sometimes a very long time—where anger and forgiveness run together, where the offer of forgiveness comes at the business end of a “woe unto you” and even of a whip. Did Christ not offer forgiveness in his very acts of anger? Was he somehow lacking in forgiveness, a less perfect Son of God, because he sometimes offered it more with a scourge than with a simper?

God’s offer of forgiveness precedes the conversion of the evildoer, and the anger lasts until she converts.
sharetweet

“Vengeance is mine,” saith the Lord—but this anger is not reserved to him alone. For the Psalms are the prayerbook of the Church, the pattern and the pedagogy of our own prayer. Its words are resituated with the coming of Christ, but they are not abrogated. This is what an unforgiving anger and a facile mercy both forget: that our offer of forgiveness, like God’s, comes before the wrongdoer’s repentance, and that its purpose is not to pacify but to reconcile. This is the love of enemies that is truer for wanting even more what is good for our persecutors: the more complete dismantling of their self-conceptions, the more radical reconstruction of their true selves.

None of this is to say that Brandt Jean should have been more angry in his testimony; Christ is not always and everywhere consumed by zeal. But it is to take his forgiveness not just within the context of his parents’ call for justice but within a much longer context of anger and indignation. It is not to suggest that he define himself by his relation to those who persecute him, but it is to note that he has defined himself by his relationship with Christ, and that this carries with it a certain relation to his persecutors. It is not to recommend some all-consuming anger, but it is a reminder that, if this week or five years from now he thinks of his brother and anger rises in his heart about the murder, there are prayers for that anger—Christian prayers, prayers that do not deny it or treat it as a sin but direct it back toward God.

Those who idealize Brandt’s brand of forgiveness without the larger story of which it is a part—in his life, in his community’s life, but also in the life of Christ and Christ’s community that are our common pattern—are guilty of a kind of Marcionism that denies a righteous anger at sins of the past in favor of forgiveness, as if we had to choose between the two. Such a suppression of the Old Testament, like Marcion’s own, would require a radical revision of the New Testament. In the end, those claiming that black Christians should forgive their persecutors, because that’s what Christianity requires, must also acknowledge that Christianity allows black Christians to face their persecutors with the imprecatory Psalms. These Psalms, like all prayers, find their place on the cross: a reminder to those who tell us to give up our lives for our enemies that, in doing so, we can still rebuke them; and a reminder for those who would rebuke their enemies that we can, at the same time, die for them.

Ross McCullough is an assistant professor of theology at George Fox University and a faculty fellow in the William Penn Honors Program.