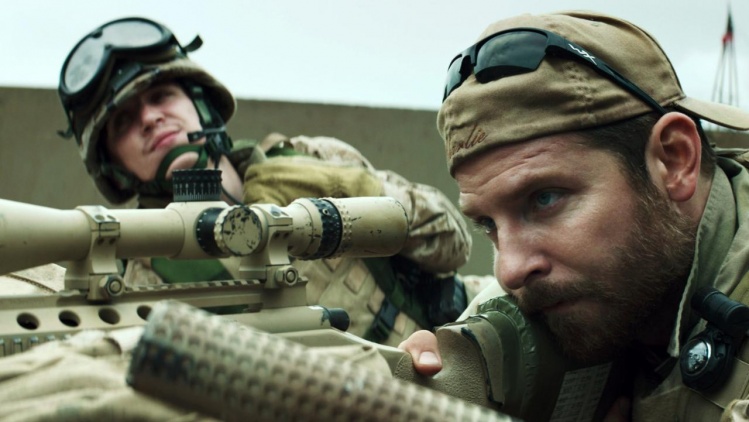 Moviegoers are up in arms about a film of arms—American Sniper, Clint Eastwood’s tense account of the bloody saga of Chris Kyle, the Navy Seal who, during four tours of duty in Iraq, notched more kills than any sniper in U.S. military history. Some critics have trashed the film as warmongering, racist, right-wing propaganda. Amy Nicholson in the L.A. Times calls it “a rah-rah war-on-terror fantasy.” On Vox, Amanda Taub deems it “recruitment propaganda” and “a Hez-bollah martyr video for the Fox News set.” Even an approving review, by the New York Times’s A. O. Scott, asserts that the film “reaffirms Mr. Eastwood’s commitment to the themes of vengeance and justice in a fallen world...[where] violence is a moral necessity,” and that it represents “an expression of nostalgia for [George W. Bush’s] Manichaean approach to foreign policy.”
I’m guessing this vehemence has surprised Eastwood, who set out to make a film of some nuance. And in fact, you can pick out a number of scenes in Sniper that challenge received notions of patriotism and a soldier’s duty. Take the decision made by Kyle (Bradley Cooper) to return to Iraq again and again, even when his wife Taya (Sienna Miller), at home with two little children, begs him not to. When he insists that he’s “doing this for my country,” she retorts, “You’re doing this for yourself”—a soldier following the siren call of battle, even at the cost of abandoning his family. In another crucial scene, a fellow Seal confesses to Kyle his doubts about the war; later, that soldier is killed, and at his funeral his grieving mother reads a letter that he wrote, highly critical of the invasion. Driving home from the cemetery, Kyle’s wife asks him what he thinks. “That letter killed Mark,” Kyle says tersely; “he let go, and he paid the price for it.” It’s the soldier’s code as straitjacket, binding Kyle in a patriotism that borders on denial.

The problem is that these antiwar moments are allowed into the film the way a liberal is allowed onto Fox News—to state a mildly dissenting case before being overwhelmed by the other panelists. Sniper puts war critiques forward, only to blow them away with fusillades of patriotic invective. To begin with, though the doubting soldier alludes to “evil on both sides,” the only evil we see is the evil committed by the “savages,” Iraqi insurgents who torture hostages, keep shelves of dismembered body parts, and brutally murder little children in front of their parents. Their wantonness is a given, while the killing done by Americans is presented as a tragic necessity. When Kyle is forced to shoot a young boy, it is only because the boy is about to hurl an improvised bomb to kill the squad of American soldiers Kyle is protecting. And when Kyle pulls the trigger, we see the wound it makes in his humanity.

Eastwood has described Sniper as apolitical, insisting in one interview that “there’s no political aspect there other than the fact that a lot of things happen in war zones.” Yet in simplifying the background to the Iraq war in order to highlight the individual story, he and his scriptwriter, Jason Hall, have in fact staked out a political position. Kyle is spurred to enlist by the embassy bombings in East Africa; and his gung-ho departure for Iraq occurs shortly after he and Taya look on in horror at the scenes of 9/11 on the news. Linking the war in Iraq—and Kyle’s patriotic avidity to fight in it—to the embassy bombings and 9/11 both ratifies and bolsters the error of association that drove the war: namely, that invading Iraq was necessitated by Al Qaeda’s attacks. In this sense the film commits a gross misrepresentation of history—the same one that continues to hold sway in the United States—and does us a civic disservice.

Clint Eastwood made his name as an avatar of violence, the angel of vengeance in such westerns as High Plains Drifter and Hang ’Em High. In the 1970s, the Dirty Harry movies brought the Man With No Name to the streets of the city in the figure of Harry Callahan, a strong silent man wielding lethal righteousness to clean up an urban world corrupted by liberal permissiveness. Later in his career, both as actor and director, Eastwood sought to revise this motif. The effort peaked with Unforgiven (1992), where dishing out lethal vengeance occasioned not exultation but degradation and shame, and continued with such minor entertainments as True Crime and Blood Work, which addressed the recipients of violence and their suffering. Mystic River (2003) was a film haunted by the silence of the victim and the ever-unfolding legacy of male violence, themes Eastwood continued in subsequent films, notably Changeling (2008).

American Sniper takes an ambiguous position in this evolution. One can view the film as a PTSD chronicle, since it explores the trauma and the stress that disorder a soldier upon his return from war. But what Eastwood is really up to, finally, is romanticizing the code of the warrior, a task he performs with powerful sentimentality and symbolism. The real Chris Kyle survived his four tours and returned to the United States only to be killed by a troubled vet he set out to counsel, and Eastwood closes his film with footage of Kyle’s actual funeral: a motorcade, followed by a ceremony in the Dallas Cowboys stadium. In the end, whatever doubts the film may have raised about the merits of the Iraq war melt away into the American pageantry of the funeral—flags, flowers, football—and the prospect of grieving Navy Seals pounding gleaming gold trident pins into the wooden casket in a ritual of brotherhood.

This solemn pageantry is very much a piece of who we have become in the post-9/11 era. Kyle and Taya’s decision to marry, made immediately after watching the World Trade Center attacks, places their relationship in the tradition of wartime romance, where the pressure of impending battle both sharpens and hastens the commitment of marriage. But more significantly, it also sacralizes the attacks; the scene in which the couple console each other while watching the towers fall emanates a holy quality, its dire implications blending weirdly with the sacrament of marriage and configuring military service as a sacred responsibility.

Whether Eastwood admits it or not, this sacralizing impulse discloses a political agenda. American national self-understanding after WWII followed a long arc of disenchantment, with Vietnam as the crucial turning point. As historian Christian Appy notes in his new book, American Reckoning, Vietnam “exposed American exceptionalism as a dangerous myth” and threw into doubt “the once widely held faith that [this] country is the greatest force for good in the world.” In the aftermath, the political right undertook what Appy calls “a restoration project,” whose goal was “to rebuild everything they thought the war had destroyed—American power, pride, prestige, and patriotism.” It was a project boosted by Reagan and aided immensely by the attacks of September 11.

It’s hard not to see American Sniper as little more than another tool in this effort of restoration. The film is awash in patriotic spirit; even its notes of lamentation are sounded in a patriotic register. As Appy penetratingly observes, our attempts to reckon with Vietnam ultimately cast the war as an American tragedy and crucible of American suffering. “The focus was on healing, not history,” he writes, a focus that “encouraged citizens to honor military veterans without debating the merits or meaning of the wars they fought.” This is precisely the problem with American Sniper, and the reason the film has provoked such controversy. To the left, Eastwood’s chronicle of American hurt and healing is morally grotesque, since it evokes the toll the war took on our soldiers while conveying no inkling of the catastrophe it visited upon the Iraqis. To the right, meanwhile, such critiques outrageously besmirch patriotism. Are critics of Eastwood’s film implying that we are the savages? American Sniper reminds us that we’re still fighting Vietnam among ourselves.

Should I mention that it’s also a pretty bad movie? Herky-jerky storytelling, with an entire story arc (Kyle’s work with wounded vets) crammed into five minutes at the end; the duel of our Good Sniper vs. the equally talented Iraqi Bad Sniper, turning a war into a sports face-off; crassly sentimental echoings of mythic father-son moments, and on and on. In places the film is hackneyed and obvious. Granting it an Oscar nomination for Best Picture seems itself an act of deference to heroism in arms.

In retrospect we see that during the Vietnam era, the political critique of the war overwhelmed our instinct—and our obligation—to honor soldiers for their duty. Today we have swung in the opposite direction, and refrains of “thank you for your service to our country” all but obliterate the political critique. Confecting the mawkish and the hawkish, American Sniper extols a worship of duty, sacrifice, and honor, inviting us into the cult of the warrior. Nothing remains of the sense of absurdity, or farce, or skepticism, or outrage—any of the sentiments that can and should be raised against military policies gone terribly wrong. Bradley Cooper does a valiant acting job, but he’s just a grunt in the film’s trenches. In moviemaking, as in war, the fault lies with those who write the script and direct its execution.