'All Things Made New'

From Wittenberg to Brexit
By William Storrar
Theology
Books 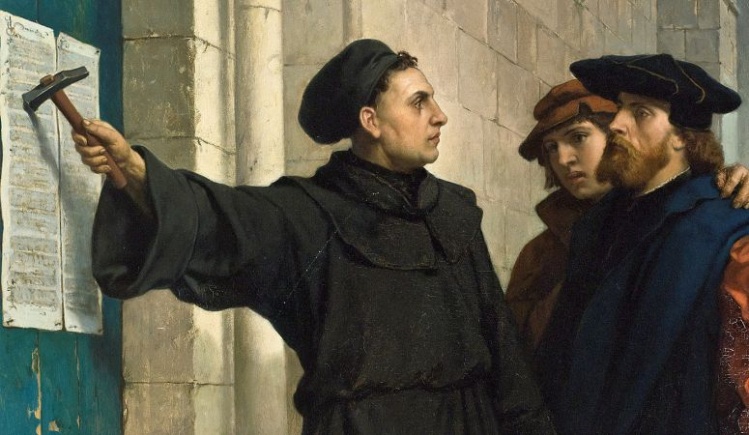 How significantly does the distant past impinge upon our busy and ever-challenging present? Shortly before the United Kingdom voted to leave the European Union, an article in the New York Times suggested that the anti-Brussels mood in England might best be explained by Henry VIII’s break with Rome in the 1530s. A far-fetched thesis? In fact, none other than the doyen of English church historians, Diarmid MacCulloch, appearing on the BBC after the referendum, made just such a comparison. That BBC program discussed how we might take the long view on current events, and there are few scholars better qualified than MacCulloch to do that. In his new book, All Things Made New, MacCulloch offers us his own long view of the Reformation in Europe, and especially in his native England. Combining magisterial erudition with an accessible style, he serves as a deft restorer of historical tableaux, stripping away the partisan varnishes that have altered our picture of these sixteenth- and seventeenth-century movements.

With topics ranging from early Protestant views on angels to the lasting damage done to archival research by a rogue forger in the seventeenth century, these essays on the Reformation and its legacy dazzle with flashes of fresh insight. MacCulloch’s more recherché topics deftly draw us into the heart of his concerns. He wants us to understand the religious beliefs of centuries ago in their own terms, however strange they may seem to modern secular sensibilities—an effort of the historical imagination that can help us comprehend analogous forms of religious belief and practice in the contemporary world. And he wants us to see what is at stake in the craft of writing church history. At its best, it is a discipline that brings sanity to the study of Christianity, a religion prone to recurring cruelties and lethal certainties. This is especially true of the period in question.

While it took Luther ninety-five theses to set the Reformation rolling, MacCulloch is more succinct, offering what we might call his five theses on its history. First among them is that the Reformation was caused by religious ideas, and cannot be reduced to social, economic, or political factors (such as the rise of nationalism). Contrary to the conventional Protestant picture of a struggling late-medieval church, it was in fact a religious institution in good order, nurturing a piety that retained the devotion and even the fervor of its adherents across Europe. Indeed, what makes the Protestant movement so remarkable to MacCulloch is the power of its ideas to bring down such a strong organization and thriving belief system. The Reformation was not the collapse of a tottering edifice, as Protestant legend has it, but rather a crucial round in a long-running theological dispute in the Western Church, symbolized by Paul and Augustine, concerning divine sovereignty and human depravity. Noting how many Protestant leaders were former Catholic clergy, MacCulloch demonstrates that it was their Augustinian change of mind on the question of salvation that gave the reform movement its energy and zeal, provoking in turn the energized and zealous response of those who defended and renewed the old salvific order.

Second, MacCulloch insists that we must think and speak in the plural—of reformations, that is—when we discuss the sixteenth and seventeenth centuries. Several of the opening essays consider the Catholic Reformation, a term MacCulloch prefers to Counter-Reformation. In a review of John O’Malley’s authoritative study of the Council of Trent, he explores the church’s reformist response to the Protestant challenge. As evidence of Trent’s impact, he tells the story of the Chisholms, a Scottish noble family who moved in three generations from controlling a bishopric as a matter of family property, to producing a devout bishop in exile from Reformed Scotland:

This reverse Rake’s Progress is instructive: from medieval clerical worldliness...to a discovery of a new seriousness, informed theological awareness and commitment.... It reminds us that not only Protestants were constructing new identities in the sixteenth century; it is the story of the Counter-Reformation.

MacCulloch also helps us see how porous were the membranes between these reformations and how fluid the flow of ideas across them. Somewhat provocatively, he portrays John Calvin as the fifth Latin doctor of the church, heir to the theological inheritance of Ambrose, Jerome, Augustine, and Gregory. He argues that the Genevan reformer was the most Augustinian theologian of the sixteenth century and a champion of Catholicity, a trinitarian orthodoxy he was concerned to prove to all parties in his stance on the trial and death of Servetus for heresy.

MacCulloch’s third thesis, worked out in the essays on the English Reformation and its historiography that make up some two-thirds of this collection, concerns the family secret of the Church of England, which he has spent his scholarly life exposing. Contrary to the picture drawn by Anglo-Catholic church historians in the nineteenth century, the early Church of England was not the vaunted Anglican middle road between Rome and Geneva. Rather, as MacCulloch shows in his accounts of Thomas Cranmer, the Prayer Book, the Elizabethan church settlement of 1559, and the King James Bible of 1611, the English Reformation was a thoroughly Protestant one. It looked to Strasbourg and Zurich for its models of godly renewal in doctrine and worship, rather than to Luther’s Wittenberg. The only English divergence from the rest of Reformed Protestant Europe lay in the unique survival of the pre-Reformation cathedrals and their liturgical traditions—a survival MacCulloch attributes to Elizabeth’s love of choral music and the willingness of covert Catholic composers like William Byrd to serve the new regime. It was not until the troubled reign of Charles I that the Church of England began to develop a form of ecclesial life markedly different from its fellow Protestant Reformed churches in Europe.

This assertion of the Protestant origins of the Church of England leads MacCulloch to what we might call his fourth, American thesis on the Reformation: namely, that if you want to see what the Reformation looked like in sixteenth-century England, you should look to the Massachusetts Bay Company settlement in seventeenth-century New England. In fact, the apocalyptic religious imagination that was the common inheritance of Protestant Europe flourished in Puritan America to such an extent that McCulloch traces its continuing influence forward to the post-9/11 rhetoric of the Bush presidency. He argues that even today, America cannot be understood except in light of the religious ideas that inspired the Reformation; a more secular Europe baffled by American fervor is really baffled by its own past, and the Old Time Religion that gripped its continent centuries ago.

MacCulloch illustrates this thesis with an essay on the Bay Psalm Book, first published in Boston in 1640, and the first book ever printed in North America. MacCulloch sees it as “proudly emblematic of everything that the English-speaking colonies in America stood for” in their Puritan love of plain, scriptural religion. The American translators of these Psalms of David admitted that their version was not as smooth as some might want. God’s altar needed no literary polishing, they asserted, and so they had opted for conscience rather than elegance as their guiding principle. For MacCulloch, the Bay Psalm Book represents a sacred aesthetic that is as North American as a Shaker chair. Its message helps us understand not only America’s Protestant origins but also its contested present and future.

The final essay in this volume celebrates the contradictory and hybrid nature of Anglicanism. In the process, it provides us with a fifth thesis on the nature of Christianity in general: that knowing its past mocks our present dogmatism and should make us think again. That is both MacCulloch’s luminous accomplishment as an historian of the Reformation, and his irenic plea as an Anglican in the contemporary debates that divide the church today as fiercely as did the debates of half a millennium ago. Whatever our own views on such present-day disputes, we should all be grateful for the long view offered up in this stunning feat of scholarship.

Blame It on Scotus