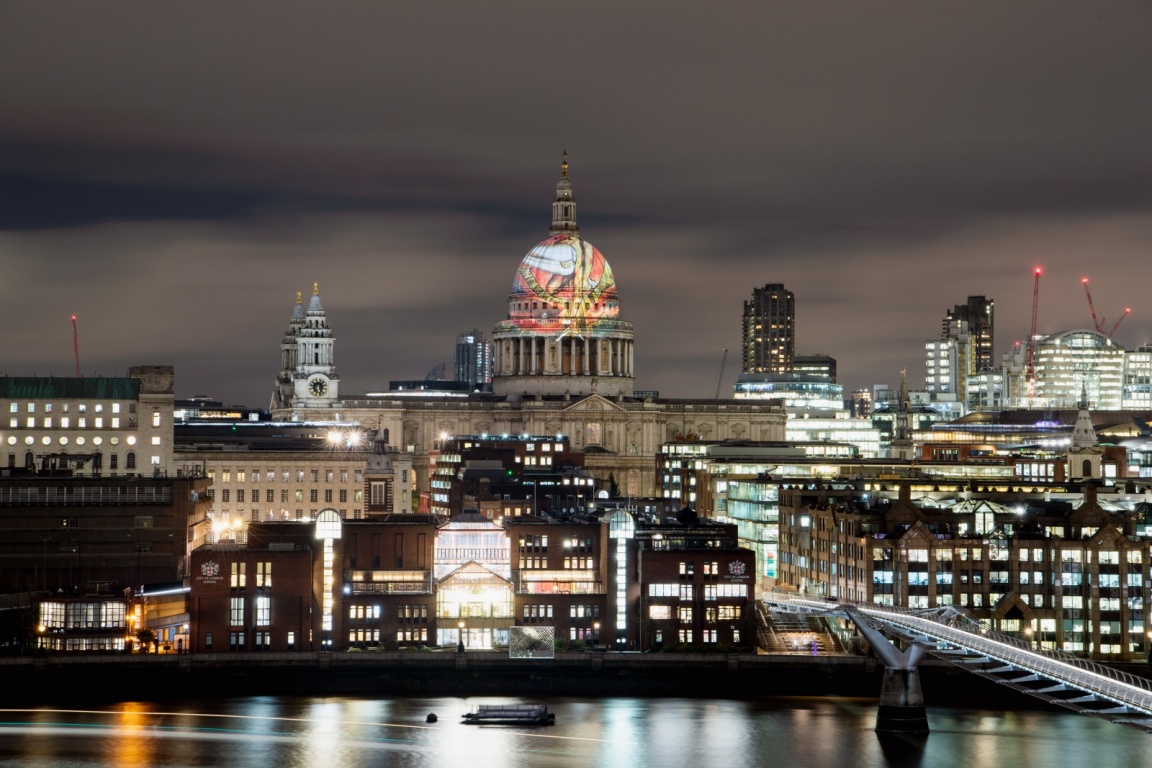 With England at a critical juncture in terms of national identity, the time seems right for a retrospective of William Blake’s artwork. The seminal poet of the Romantic Age famously cautioned against the expansion of the British empire, the Enlightenment, and mass industrialization. But his paintings, prints, and drawings had almost as much to say, and now, as Brexit freshly looms, the Tate Britain is displaying more than three hundred such works in a show billed as the largest exhibit of his art in more than a generation.

William Blake runs at the Tate Britain through February 2, 2020, and it doesn’t disappoint. Indeed, it opens with Blake’s iconic Albion Rose, which depicts a pristine white figure posed after Leonardo da Vinci’s Vitruvian Man. He stands on a rock, arms outstretched, backlit by rays of gold, fiery red, and royal blue. “Albion” is the ancient mythological name for England, and Blake made the painting in 1795, just as the country was expanding its empire to include South Africa, allying with Russia and Austria against the French during their first revolutionary wars, and bread riots were erupting across the nation. The painting speaks to England’s political awakening and as such is an optimistic work, its radiant luminosity hinting at a time beyond the burgeoning crises of modernity and British imperialism. 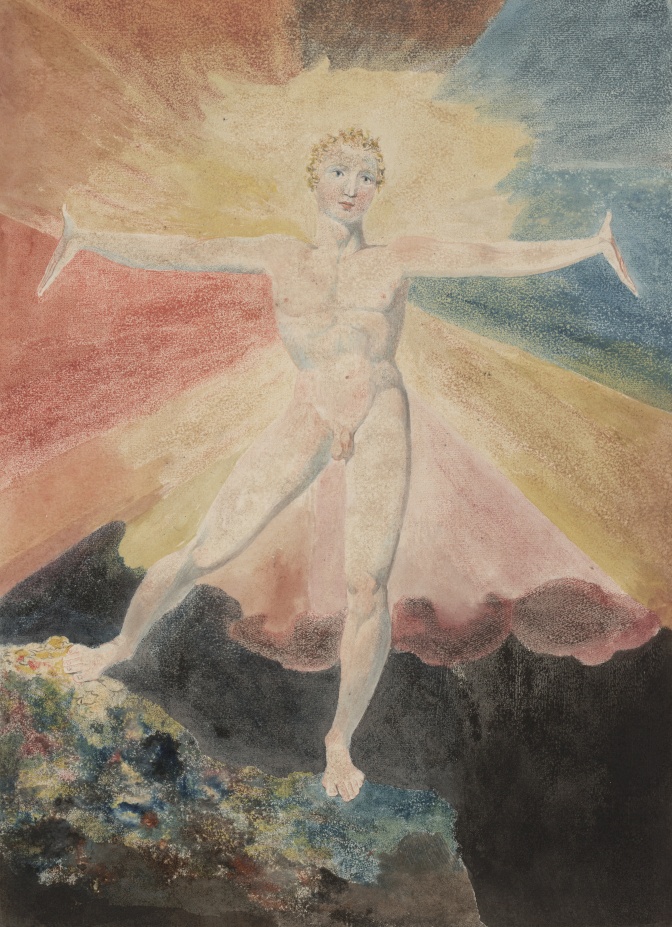 Blake was born in Soho, London, to a middle-class family; his father was a hosier. Though he stopped formal schooling at the age of ten, he was intellectually curious and read widely on subjects that interested him. His favorite poets included Edmund Spenser and John Milton, and he was strongly influenced by the Bible, though he was hostile to most organized religion. At fifteen, Blake began an apprenticeship to a local engraver, and seven years later enrolled at the Royal Academy. He was pessimistic about the Academy and the contemporary art world in general, though he felt a certain kinship with the medieval past. While oil painting and the pursuit of “general beauty” (often depicted through landscapes) were fashionable at the time, Blake despised these modes and felt that narrative particularity, especially through history painting, was far more effective. While younger artists like J.M.W. Turner and John Constable were acclaimed for airy, naturalized paintings of the environment meant to grapple with man’s smallness in a precarious, modernizing world, Blake tried to make sense of the present via medieval wisdom and mythology.

After Albion Rose, the show unfolds mainly chronologically. Prints, books, and paintings are on view through five rooms, each of which introduces viewers to a different aspect of Blake: his earliest artistic formations, his foray into printmaking, the role of patronage in his artistic production, his temperamentality and despair, and the productive period at the end of his life. Throughout, Blake’s political inclinations are apparent. Suspicious of empire, he was inspired by the American and French revolutions, viewing the former prophetically, as an aperture into revolutions to come. He devised a complex personal mythology through which Albion, a primeval man, falls and is divided into four embattled factions, or Zoas: instinct, reason, love, and the imagination. This conflict is expressed in several of his epic poems, which were often richly illustrated. Take a print of Milton: A Poem, in which Milton sets off on an “immortal journey” to rescue Albion by the power of the imagination. The language is vivid, alarmist, at times even bizarre, interwoven with narrative details from Blake’s own life. It’s illustrated with exaggerated, heroic renderings of the male form—often, Blake turned to archaic renderings of the classical male nude for contemporary social critique. Contorted forms in dark jewel tones are met with Blake’s evocative depictions of the material world, which he regarded with anxious reverence as “nature’s cruel holiness.”

Many dismissed Blake at the time, questioning his mental health. Indeed, Blake suffered an intense spiritual loneliness for much of his life, and this is palpably reflected in a number of works, including plates from the The Book of Urizen (Urizen represents reason and a cruel God). These haunting images feature a ghostly, haggard figure often crouched or writhing in anguish alongside luminous red spheres. In one, Urizen, in the blackness of night, pushes against the boundaries of the image while lugging a shining, blood-red orb. Scrawled beneath the image are two lines: “Fearless tho’ in pain / I travel on.” 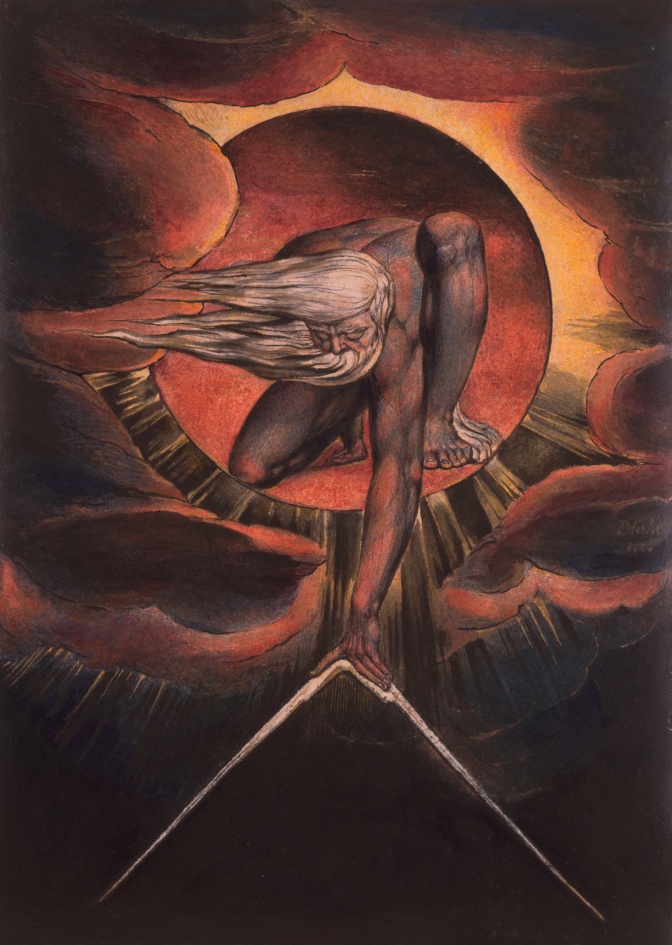 William Blake, Europe, Plate i: Frontispiece, The Ancient of Days, 1827 (The Whitworth, The University of Manchester)

Yet as grim as this seems, Blake is emphasizing the ephemerality of suffering and the promise of a life to come. Though deeply engaged with pain, he was not consumed by it. There is even a sense of innocence detectable, most notably in a series of children’s books he created. An astonishing breadth of these works fills an entire room, where viewers are encouraged to proceed leisurely: you can lean on white blocks to closely examine the tender rhymes and their accompanying visuals, usually delicate prints of children in nature. Plates from Songs of Innocence and Experience—a work Blake was only able to sell fewer than thirty copies of during his lifetime— is one of the most endearing. It’s divided into two parts, the first taking up Biblical themes and events of Christ’s life, and the second, notions of freedom from the inevitable suffering of this world.

In 1809, at the age of fifty-one, Blake planned a show he hoped would be a grand retrospective of his career. “In this Exhibition,” he promised in a promotional flyer, “will be seen real Art, as it was left us by Raphael and Albert Durer, Michael Angelo, and Julio Romano; stripped from the Ignorances of Rubens and Rembrandt, Titian and Correggio.” The show was held on the second floor of a home above a hosiery shop operated by his brother, and this physical space is recreated in the Tate, with bannisters and wooden floors evoking Blake’s family home. But the retrospective was hardly the tour de force Blake anticipated. Few of his friends showed up, and the single review dismissed him as “an unfortunate lunatic.” 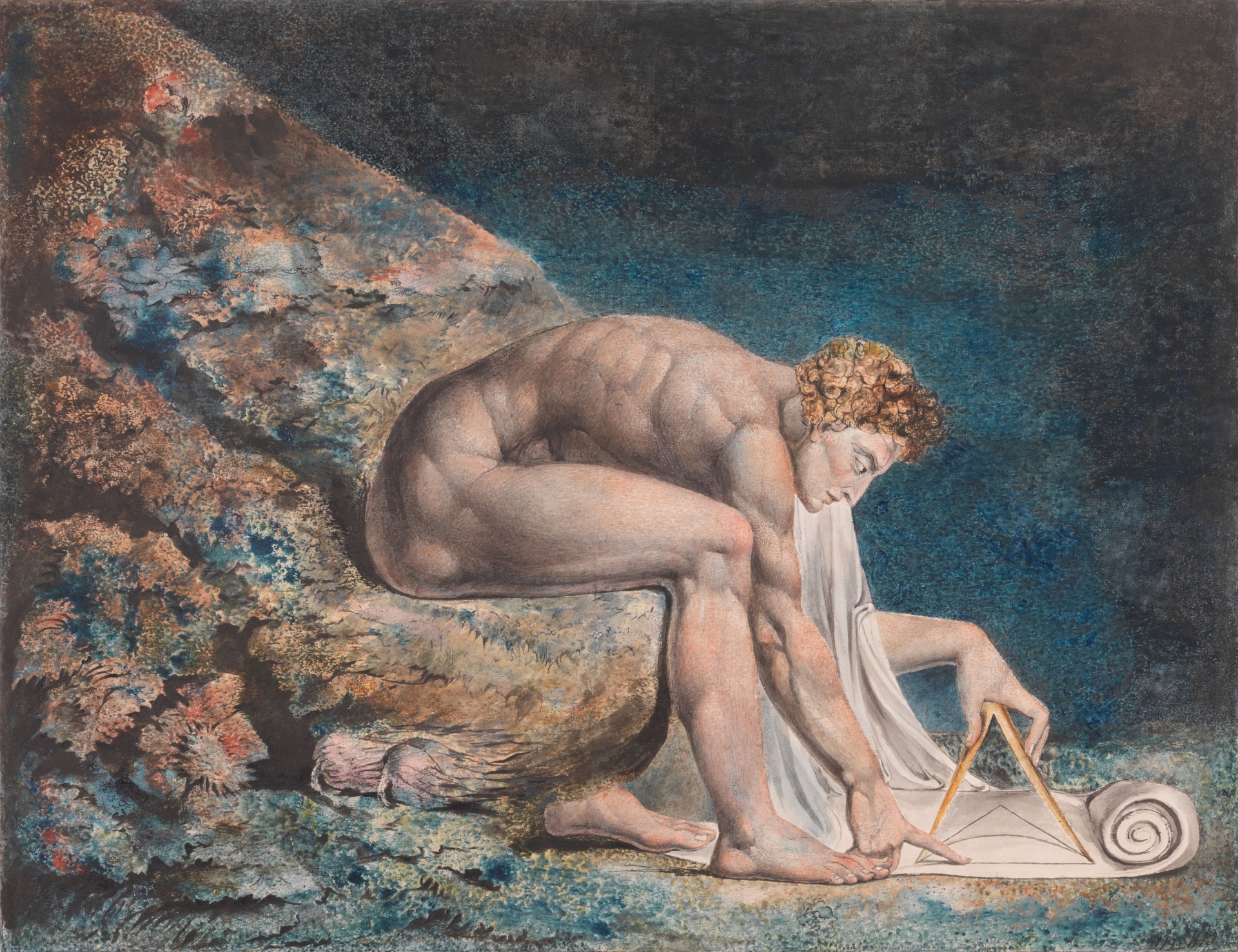 Blake viewed the 1809 exhibition as a great betrayal by those around him, and it marked a turning point in his career. He exhibited for the last time in 1812 before withdrawing from public life for several years. But following a period of isolation and contemplation, Blake had a rebirth of sorts. His last decade was remarkably fruitful, marked by renewed friendships and creativity. And the final room features many of these works, including commissioned illustrations for Dante’s Divine Comedy and Milton’s Paradise Lost. These works, with their ethereal, cool metallic shades, reveal the extent of his artistic evolution. They possess a quiet self-containment and a sense of peaceful resolve not evident in his restless earlier works. The Creation of Eve stands out: a powerful God draped in billowing garments ordains Eve from Adam’s gently sleeping body. Eve emerges with her arms folded in prayer, gazing towards Heaven under a moonlit sky.

Blake never lost hope in the power of the individual to make a difference in times of uncertainty.
sharetweet

Blake wished for his art to be displayed in large-scale form, and in honor of his 262nd birthday on November 28, 2019, the Tate projected Ancient of Days onto the dome of St. Paul’s Cathedral. The show ends with this painting, which Blake considered his finest. The title is a name for God in the book of Daniel, and the work was inspired by a vision Blake had of a human being standing in heaven whom he calls Urizen. Urizen has a gray beard and is tautly muscled; he reaches into the universe from an enclave of warm yellow and red light, gripping  in his outstretched arm a golden compass, as if drawing or measuring the divine order of creation. This depiction of reason married to the supernatural might represent Blake’s reconciliation with the world’s mysterious ways, his finding of peace in its divine ordination.

Even so, the show’s curation takes care to underscore his work’s ongoing dialogue with contemporary politics. Blake wrote in connection to a particular watercolor of angels hovering over Christ’s body: “The times require that every one should speak out boldly; England expects that every man should do his duty, in Arts, as well as in Arms, or in the Senate.” A vibrant interior life, and peace with oneself, as Blake foresaw, is essential to making sense of a society rife with division and conquest. Blake never lost hope in the power of the individual to make a difference in times of uncertainty. In the words of St. Augustine of Hippo, “Bad times! Troublesome times! This men are saying. Let our lives be good; and the times are good. We make our times; such as we are, such are the times.”