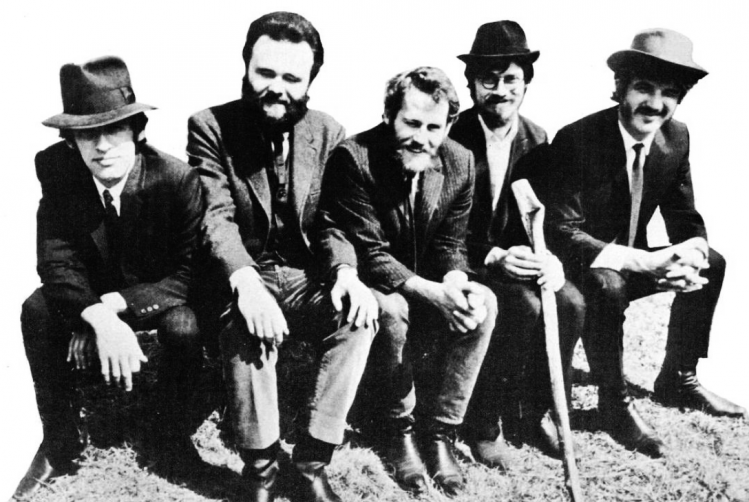 Music From Big Pink, the debut album from The Band, was released in July of 1968—the same month, fifty years ago, that found such albums as Waiting for the Sun by The Doors, Wheels of Fire by Cream, and My People Were Fair and Had Sky in Their Hair... But Now They're Content to Wear Stars on Their Brows by Tyrannosaurus Rex also hitting the market.

Why mention the L.A. bad boys, the British blues-rockers, and the obscure U.K. psychedelic folk art duo (then still a few years from morphing into T. Rex and pop stardom)? Because, in the case of Music From Big Pink, an unassuming work that quickly upended the course of rock music, context is everything. In the late 1960s world of popular music, where excess suddenly seemed a kind of virtue—production values crowing with grandiloquence, instrumental solos extending into the outer regions, rebellious attitudinizing becoming mandatory, and everything getting, well, louder—The Band’s album gave a good shake to rock and roll, kicking sonic overload and all that posturing straight out the door.

Music From Big Pink spoke of unity: a rock group—no, make that a real band—subtly reveling in musicianship, song craft, and ensemble cohesion, guided by deep respect for cultural traditions. Its honesty, poetry, mystery, understated virtuosity, and lack of pomposity shook every sentient rock musician who heard it, influencing subsequent recordings from The Beatles and The Rolling Stones to the Grateful Dead and Neil Young, among innumerable other artists on both sides of the Atlantic. A half-century later the album’s power has yet to diminish. The cleansing quality of its songs continues to draw in new generations of musicians and listeners seeking authenticity and purpose in popular music making. The case can be easily made that Music From Big Pink is the spiritual grandfather of the Americana and alt-country genres, a wellspring for visionaries ready to head off the grid, including Elvis Costello, Lucinda Williams, Wilco, and My Morning Jacket. And for all its seismic power, the album peaked at number thirty on the 1968 Billboard charts.

Thanks primarily to director Martin Scorsese’s cherished if overly sanitized 1978 documentary The Last Waltz, the birth of The Band—by now nearly an origin myth—is cemented in the minds of fans. (Credit must also forever be given to author Greil Marcus, who in his 1975 book Mystery Train: Images of America in Rock ‘n’ Roll Music, included a brilliant essay on The Band that has been the foundation source for all subsequent commentary.) Comprising four Canadians raised on American rock and roll—guitarist Robbie Robertson, bassist Rick Danko, pianist Richard Manuel, and keyboardist Garth Hudson—and the Arkansas-born drummer Levon Helm, the band (but not yet The Band) honed its considerable chops by touring throughout the early ’60s before hooking up with Bob Dylan in late 1965. After groundbreaking international tours, from which Helm quickly jumped ship and ended after Dylan’s motorcycle accident in 1966, the Canadians and their erstwhile boss settled down in the Woodstock, New York, area.

In Dylan’s home, and then in the basement of the house that Danko, Hudson, and Manuel shared—the garishly painted domain dubbed “Big Pink”—the crew informally recorded what would come to be known as “The Basement Tapes,” made up of new Dylan tunes and a host of folk, rock and roll, R&B, country, and blues songs that Dylan brought to the months-long get-togethers. The informally produced performances, which include such classics as “You Ain’t Goin’ Nowhere,” “Quinn the Eskimo,” and “I Shall Be Released,” are as stirring and mysterious as anything in Dylan’s canon, demonstrating the comfortable rapport that the master songwriter and his willing and eager compatriots had established. But, no matter all that Robertson and his cohorts absorbed from working with Dylan, the music of “The Basement Tapes” offers only intimations of The Band’s recording debut, lacking both its core identity and its inimitable glow.

A Big Pink performance is always in service to a strong song; there are gorgeous vocals and inspired guitar, bass, drum, and keyboard work throughout, yet the totality of group interaction is what announces itself.
sharetweet

By late 1967, as Robertson and Manuel matured as songwriters and Helm returned to the fold, the quintet felt ready to make a name for themselves, dubbing the now undissolvable unit The Band. Recording at respected studios in New York and Los Angeles—the music may have originated at Big Pink, but none of it was cut in the basement of the now-iconic house—The Band offered up a low-keyed masterpiece that deliberately went against the grain of contemporary popular music.

Above all, it was a strictly ensemble work. Three wholly distinctive singers—Manuel, Helm, and Danko—would trade leads; instrumental support would come in the way of obviously gifted players who were nonetheless eager to not call attention to these gifts. (Robertson, one of the pioneers of rock guitar, offers up only one solo.) A Big Pink performance is always in service to a strong song; there are gorgeous vocals and inspired guitar, bass, drum, and keyboard work throughout, yet the totality of group interaction is what announces itself. In a look-at-me age, Big Pink shied away from rock-and-roll ego-tripping grandiosity. And the performances were noticeably loose, not groomed to within an inch of their lives like the studio concoctions that so many other bands were producing.

Indeed, as Hudson was bringing a unique sensibility to the keyboards, Helm was basically revolutionizing rock drumming, and the three singers were proving themselves among the most soulful white vocalists of the era. These were accomplishments that seemingly announced themselves after a performance. The indivisible unity of the group, the manner in which all the elements fit together—remove one and the whole would fall apart—is the miracle of The Band’s sound. You could detect all the influences, from Curtis Mayfield to J. S. Bach, but parsing each becomes a fool’s game. It didn’t sound like The Band were merely trying on the disparate styles that saturated the music; it sounded as if they owned them all.

Big Pink’s songs weren’t about to give the show away either. Here’s where Dylan’s influence may be most strongly felt. Obvious in the four songs he contributed, including the instant anthem “I Shall Be Released,” “Tears Of Rage” (music by Manuel), and “This Wheel’s on Fire” (music by Danko), Dylan’s lyrical ambiguity also suffuses the original work by Robertson (“To Kingdom Come,” “Caledonia Mission,” “Chest Fever,” “The Weight”) and Manuel (“In a Station,” “We Can Talk,” “Lonesome Suzie”). These are songs shrouded in mystery, populated with shadowy characters in puzzling locales. A spiritual aura, enigmatic at best, hung over the entire project. What any specific song was all about was hard to pin down, but you knew it was bigger than any tale of quotidian romance, than adolescent rebellion or psychotronic indulgence. These guys weren’t fooling around.

The urge to examine every performance on the record is difficult to resist; a precious few highlights must do. The album commences with what amounts to a slap in the face to the pop world: “Tears Of Rage” is nothing less than a dirge—maybe the last thing any other nascent rock group would present as the first track on a debut album. As wrenching as Dylan’s lyrics are, and Manuel’s chilling vocal remains, the real genius—and the key to much of the album’s subliminal power—is Helm’s idiosyncratic drumming. Throughout Big Pink, Helm, tuning his instrument to a distinctively lower pitch than normally heard on most rock recordings, seems to be reacting purely to a song’s individual spirit, indeed its very lyrics, rather than just finding a workable groove. His blend with Danko, another intuitive instrumental genius, is always a thing of beauty.

In “The Weight,” Robertson wrote a modern-day hymn, complete with stirring gospel-styled piano by Hudson. Suffused with ambiguity and dread, Robertson’s first masterpiece has become a communal classic that future generations might well believe to be a folk song. The overlooked gem, however, is Manuel’s “We Can Talk,” a performance that sums up the entire aesthetic of The Band. What this stunning piece is trying to express is anyone’s guess: the deadening effects of slavery? The tyranny of life on the road measured against the joys of rural living? Better to look for meaning in Helm’s punctuating drumming, Hudson’s swirling organ, and the three singers bouncing off one another with gleeful abandon. This is rock and roll as a model for community. Again, these are mere highlights. Each song contains multitudes of surface pleasures and subterranean surprises that continue to delight and mystify decades on.

What impressed itself most on listeners in 1968, and continues to today, is the utter authenticity of Music From Big Pink. In a sense, the album’s lasting importance is that it gave other artists permission to be truer to themselves and their art. Music From Big Pink sounds as if it had to be made by the only musicians who could make it. Can we ask more of rock and roll, or any other music?

Steve Futterman has written about jazz for The New York Times, The Washington Post, and Rolling Stone and for the past two decades has contributed the weekly "Jazz and Standards" listings for the New Yorker.