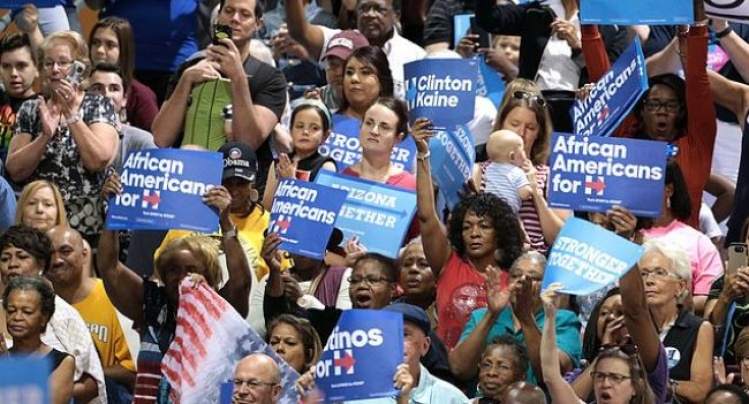 Let’s be clear: The United States of America is not Donald Trump’s country.

When all the returns are in, Hillary Clinton will emerge with a popular vote lead of some 1.5 million to 2 million votes, according to estimates by both Nate Cohn of The New York Times and Henry Olsen, a conservative voting analyst whose pre-election predictions were close to the actual results.

To point this out is not a form of liberal denial. It’s a way of beginning to build a barricade against right-wing triumphalism— and of reminding immigrants, Muslims, African-Americans, Latinos and, yes, our daughters that most Americans stood with them on Election Day.

It is also not true that the emerging political coalition that elected President Obama died on November 8. That alliance maintained its national advantage, as the popular vote shows, and came within a whisker in Wisconsin, Pennsylvania, and Michigan of delivering the election to Clinton despite an onslaught of partisan congressional investigations, Russian meddling, and the last-minute political intervention of the FBI.

We dare not forget the power that was arrayed behind Trump because it is that power that must be resisted over the next four years. Obama and Clinton both did the expected thing in wishing Trump well, and Lord knows, nothing would make me happier than for Trump to surprise us by being a pragmatist who said a lot of stuff he didn’t believe to win the presidency. If he governs reasonably, we will all be better off.

That wish, however, does not absolve us of the obligation to vigilance against the other possibility: that the real Trump is the man we actually watched, many of us in horror, for month after month.

But there is one piece of the post-election conventional wisdom that is importantly right, yet in ways more complicated than we progressives might wish.

Those who touted the power of the Obama coalition made the grave miscalculation of forgetting that white working-class voters were essential to making the new alliance work.

Obama’s base was made up of Americans of color, the young, and whites from the large metropolitan areas. But he was put over the top, as some of us insisted at the time, by securing a significant share of the white working-class vote, particularly in the Midwestern states where in 2012 he won 40 percent or more from whites without a college degree. In Wisconsin, for example, Obama won 45 percent of those voters; Clinton was backed by only 34 percent of them this year. And Clinton lost Wisconsin by just 27,000 votes.

Clinton counted on doing better with white working-class women than she did (they went for Trump by a remarkable 62 percent to 34 percent) and also with college-educated white men, who went 54 percent to 39 percent for Trump.

Democrats sorely need to recover ground with white working-class voters, especially after learning that even a candidate as troubling as Trump could not sufficiently loosen the Republican loyalties of many among the college educated—particularly men.

Still, progressives hoping that a heavy dose of populism will be enough to win back the working class must not be under the illusion that the Trump constituency was motivated solely by economics.

In fact, Trump's immigration stand (he won 86 percent of voters who want to build a wall on the Mexican border) and his law-and-order appeal (he won 74 percent among those who rejected the idea that the criminal justice system treats black Americans unfairly) were key to his victory. When exit pollsters asked voters to name the most important issue facing the country, he won among those who listed immigration or terrorism; he lost among those who cited the economy. Trump’s hard-edged social conservatism, not just a general anti-establishment appeal, drove up white turnout in many key counties.

Finally, lest anyone doubt that the outsized attention given to the matter of Clinton’s use of a private server was decisive, consider that 45 percent of voters said that her use of private email bothered them “a lot,” and they voted better than 12-to-1 for Trump.

It’s too late now, but does anyone in the media (or FBI Director James Comey) really believe the email story was more vital to our country’s future than the many revelations about Trump, his scapegoating of so many of our fellow citizens, or the radicalism of his program? Congressional Republicans did all they could to destroy Clinton by spending twenty months pushing this issue. They succeeded, and gave us Trump.

The Limits of Pessimism