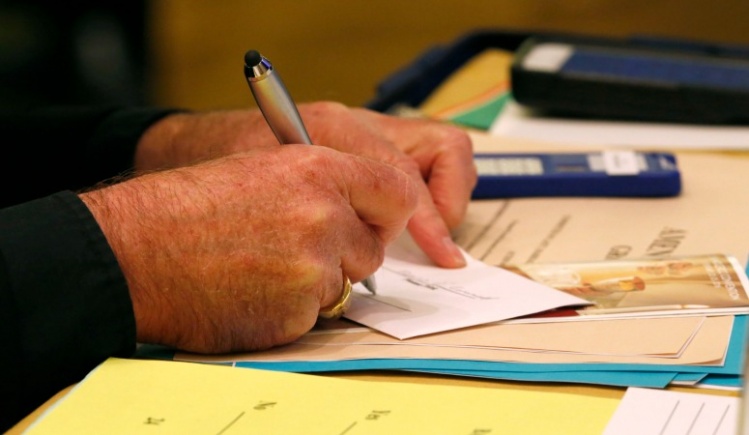 Pope Francis’s decision to send Cardinal-designate Joseph Tobin to the Archdiocese of Newark (New Jersey) should not come as a total surprise.

The former international head of the Redemptorists and archbishop-secretary of the Vatican’s congregation for religious orders had spent the past four years as Archbishop of Indianapolis.

And that’s where he was on October 9 when the pope announced that Tobin—along with Archbishop Blase Cupich of Chicago—would be among seventeen men to get the red hat at a November 19 consistory in St. Peter’s Basilica.

But as I noted in a previous Letter, the newly designated Cardinal Tobin made cryptic remarks at a press conference on the day of that announcement, which indicated that there were probably already moves afoot to move him out of Indianapolis.

Did no one else find that a rather odd thing to say?

“Nobody’s told me any differently… So, I’m gonna… to mention… if I get a phone call, well… Pope Francis doesn’t want airport bishops, he wants bishops to stay put,” the 64-year-old Detroit native stammered.

“So if I have anything to say about it…” he went on, only to fade out.

A little less than a month later the Vatican announced that Pope Francis had named Joe Tobin the new Archbishop of Newark. It is now clear that the appointment was already in the works before the pope announced that Tobin would be a cardinal. In fact, that seems to have been the whole point—to put another cardinal on the Eastern seaboard of the United States.

Tobin will join Cardinals Donald Wuerl of Washington and Sean O’Malley of Boston as the pope’s most trusted allies in that crucial part of the country. More importantly, he will serve as a counterweight to Cardinal Timothy Dolan of New York, who leads the local Church just across the Hudson River.

Dolan, who many fashioned as Benedict XVI’s man in America and the future face of the U.S. church, has seen his star fall precipitously in Francis’s pontificate. Dolan’s supporters thought he, rather than O’Malley, should have been named to the pope’s Council of Cardinals (C9).

And the rest of the world has watched Cardinal Dolan struggle to convincingly articulate any type of authentic enthusiasm for many of Francis’s bold and creative pastoral initiatives.

One thing’s for sure: you won’t see Cardinals-designate Tobin or Cupich have any such problem. They are now the face of Francis in America.

What must the pope do to get the attention of the bishops in the United States?

The country’s episcopal conference (USCCB) meets this week in Baltimore for its annual fall meeting and, more than three years into Francis’s pontificate, there are few signs that it is willing to embrace the pastoral priorities the pope has a put before the worldwide church.

Instead of taking up the urgent challenge of renewing and reforming their local churches, as Francis admonishes them in Evangelii gaudium, the bishops (in conference) have spent their energy waging a futile and hypocritical war against the prevailing secular culture and fighting tooth and nail to overturn the national health care law’s contraception mandate.

Have no doubt, cultural warriors rule the USCCB.

The conference’s outgoing president, Archbishop Joseph Kurtz, was elected in 2013 to be their kindly face. He succeeded the gregariously conservative Cardinal Timothy Dolan, whose supporters staged a veritable coup d’etat in 2010 when they broke with custom and elected him over the USCCB’s then-vice-president, the more moderate Bishop Gerald Kicanas of Tucson (Arizona).

Now the U.S. Catholic leaders go back to the ballot box to elect the latest head of its national conference. It’s expected that they will choose Cardinal Daniel DiNardo of Galveston-Houston, the current vice-president.

He was one of thirteen cardinals to sign a controversial private letter to Pope Francis during the last Synod of Bishops’ assembly on the family. The letter criticized new procedures the pope had introduced to the Synod and expressed concern over his desire for a new pastoral approach towards Catholic couples in so-called “irregular” unions.

There are nine other candidates on the ballot for the USCCB presidency, but it will likely be the vice-president’s spot that one of them will get.

Amazingly, only one of them—Archbishop John Wester of Santa Fe (New Mexico)—was appointed to his current post by Pope Francis.

Yes, he is the lone “Francis bishop” on the slate. The other eight candidates are men that Benedict XVI promoted.

Meanwhile, the last two on the list—Archbishop Gregory Aymond of New Orleans and Bishop Daniel Flores of Brownsville (Texas)—have won high marks for their pastoral leadership and openness. Along with Archbishop Wester, they stand out in this crowd.

Noticeably absent from the slate of candidates are Pope Francis’s three cardinals-designate: Blase Cupich of Chicago, Joseph Tobin of Newark, and Kevin Farrell, who was not yet called to head a Vatican office when the list of names came out.

Nonetheless, this week’s election of the USCCB’s top two officers will indicate whether the American bishops are finally going to adopt the current pope’s style of leadership and embrace his pastoral priorities or whether they are going to continue to stubbornly, but politely wait him out.

November 9 was for many people the day that darkness covered the earth.

The world was stunned as “anti-establishment” candidate Donald Trump was declared winner of the hotly contested U.S. presidential race.

Trump actually lost the popular vote, getting significantly lower totals than even the last two Republicans to run for president—Mitt Romney (2000) and John McCain (2008). But he decisively won the Electoral College.

And the mood of the majority of Americans in this deeply divided nation (that is, those that did not cast a ballot for him) was summed up by this message someone sent me:

“This is 20,000 times worse than Brexit!” said a visibly worried Italian friend.

Other friends in Italy and elsewhere throughout Europe expressed similar fears. And financial markets around the world plummeted as world leaders and diplomats tried to put on a brave face.

Since the beginning of the U.S. presidential campaign politicians and diplomats around the globe quietly expressed dismay and disbelief that Trump, a twice-divorced and thrice-married narcissist with a fabricated view of reality, could be a serious candidate.

He had run a nasty and mean-spirited campaign by belittling women, handicapped people, and Muslims. He also disparaged foreign governments, vowed to rip up global trade agreements, threatened to build a wall along the U.S. border with Mexico, and promised to deport millions of illegal immigrants.

Nevertheless, the Vatican’s Secretary of State, Cardinal Pietro Parolin, did what gentlemen schooled in the art of diplomacy are expected to do. He congratulated Trump, saying the “will expressed by the American people in this exercise of democracy” should be respected.

Speaking to Vatican Radio, the cardinal then expressed his own hope that a Trump presidency would be “fruitful” and serve the good of the United States as well as “the well-being of and peace in the world.”

“I believe that today we all need to work to change the world situation, which is a situation of serious laceration and serious conflict,” the Italian cardinal continued.

And if during his election campaign Mr Trump had stood in stark opposition to some of the most urgent policy issues Pope Francis has championed during his pontificate —such as welcoming of refugees and migrants, fighting the human causes of climate change and environmental destruction, and demanding government intervention to help redistribute wealth and other resources—Cardinal Parolin extended an olive branch.

“On specific issues we’ll see what choices he makes and on that basis we’ll be able to make a judgment,” the cardinal said.

He added that it was still “premature” to comments further since “it’s one thing to be a candidate and quite another to be the president with responsibilities.”

In fact, Trump immediately sounded more responsible and less belligerent during his acceptance speech in the wee hours of November 9.

Nonetheless, the only key issue the president-elect and the pope seem to agree upon is opposition to abortion. But Trump only adopted his “pro-life” stance once he became the Republican candidate. He actually changed it several times during the campaign season.

Most Americans—and most of the world—hope that President-elect Trump will be more reasonable, moderate, and responsible than the out-of-control and vitriolic candidate Trump.

I’d wager that Pope Francis surprised most of the men who voted for him and has been a very different leader than many of them had envisioned. Will the new U.S. president do the same?

The world can only hope.  And pray.